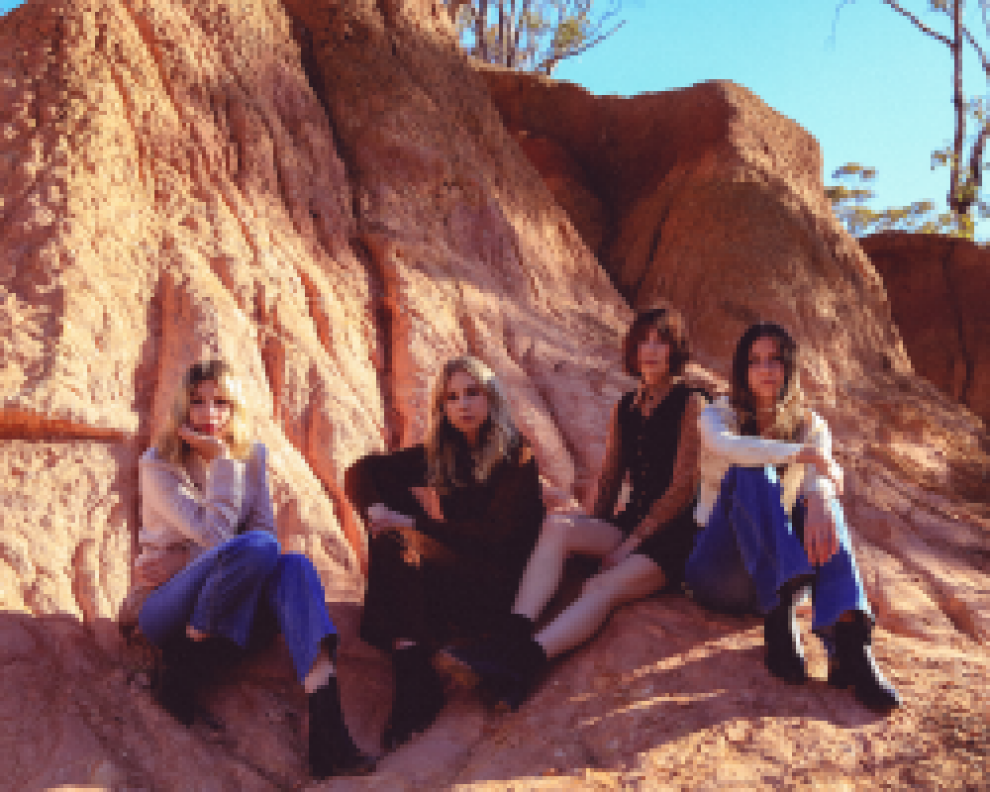 Courtesy of The Earl
Cost: $12

It all started in a shed. More specifically, it started in a shed on a family hobby farm in a tiny rural township in Victoria, Australia.
The four Findlay sisters, who’d go on to become the earthen psych-rock opal that is Stonefield, had been granted their wish of a drum kit by their parents, whose Zappa, Hendrix and Zeppelin records had long been the shared soundtrack of the household. Amy – the oldest Findlay, though at that time just 15 – took a particular shine to the kit and soon began lessons, her practice sessions echoing out across the family’s acreage. It wasn’t long, however, before her sisters were drawn back into the shelter as, one by one, they found their own instruments to wrangle with. Hannah, then 13, started on guitar. Sarah, 12, took on the keyboard. Holly, just seven years old, listened in on her sisters practicing and, perhaps hearing that something was missing, asked her father for a bass.
Stonefield’s first song ‘Foreign Lover’ was recorded for a project Amy was working on as part of her tertiary studies. When they arrived home from the studio that day, the siblings’ mother suggested they enter the track in triple j’s Australia-wide unsigned band competition, Unearthed High. The deadline for entries was that night. They weren’t convinced they had a chance, but decided to give it a shot.
Soon enough, ‘Foreign Lover’ was all over triple j, followed shortly by infectious rock stomper ‘Through The Clover,’ the song they were given the opportunity to record as part of the competition’s first prize. Stonefield was invited to showcase at the inaugural One Movement music and arts conference in Perth, which resulted in [[[renowned band booker] Martin Elbourne, inviting the band to play the 2011 Glastonbury Festival on the spot.
Over the next two years, the girls wrote and released their second EP Bad Reality. They released their debut self-titled album in October 2013. It entered the AIR charts at #6 and the ARIA charts at #21. The three singles released from the album, including Put Your Curse On Me, received immense support from triple j, and the Southern Cross Network, including MMM.
The album was well received by both the industry and general public. Such was the demand that Stonefield embarked on a national tour, spanning 22 dates and 5 states. The second single Love You Deserve took up a life entirely of its own, and the band set out on yet another tour.
By this time, the international market had caught wind of the incendiary band from rock journo heaven, and the girls headed to the UK during May to play showcases, as well as Dot to Dot festivals across the UK. In November 2013, Stonefield won the inaugural Age Music Victoria Award for Best Regional Act.
After a huge amount of touring the country last year, 2015 kicked off with the band being awarded 'APRA Rock Work Of the Year' for their song 'Love you Deserve'. Stonefield secured the support slot for one of their idol bands Fleetwood Mac in November and kicked off 2016 with a memorable US tour around SXSW, making waves across the South West. Later this year will see the sophomore release from Stonefield. The first taste ’Stranger’ is an exciting glimpse of the new music to come.