No Fascist Police State-Trump/Pence Out Now 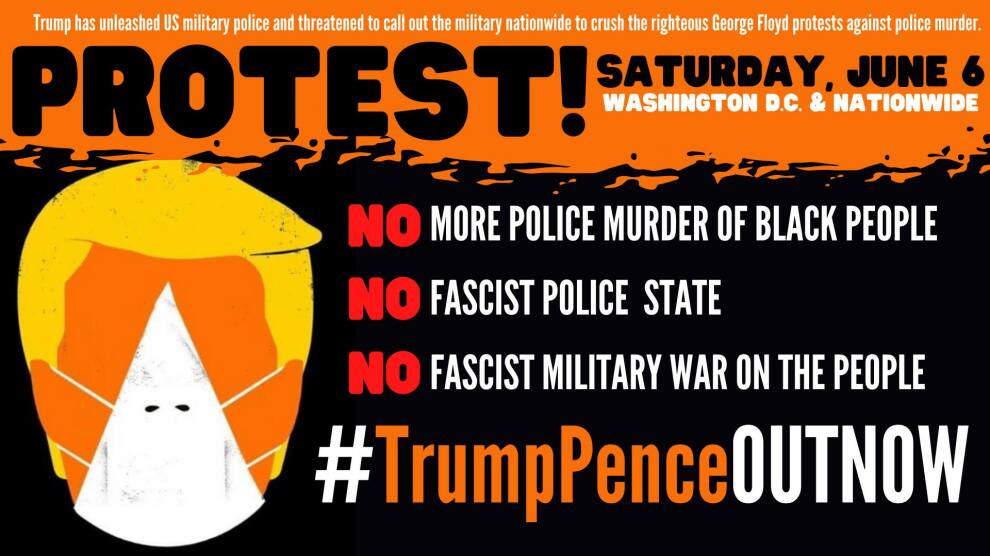 Protest in ATLANTA and cities nationwide Saturday, June 6
NO MORE POLICE MURDER OF BLACK PEOPLE
NO FASCIST POLICE STATE
NO FASCIST MILITARY WAR ON THE PEOPLE
TRUMP/PENCE OUT NOW!

ATL: Saturday, June 6 - Join Refuse Fascism at the intersection of Forsyth St. & Marietta St. near the Grady statue at 4pm. At 4:30, we will march to the ongoing protest at CNN/Centennial Park (Look for the orange #TrumpPenceOutNow banner).


An uprising has begun. Day after day, night after night, coast to coast, the streets fill with Black youth refusing to face another day in fear and people of all backgrounds who have had enough of white supremacy and a culture of soul-crushing cruelty. Comparisons to 1968 fill some with dread and some with hope, but one thing is clear. Millions have been shaken awake.

Trump has thrown down a heavy gauntlet to the people who have been heroically protesting in the face of heightened repression. Under the orders of Attorney General Bill Barr, federal forces hurled unrestrained brutality on peaceful protesters at Lafayette Park on June 1, driving them out so that Trump could rant like a police-state dictator and pose with a Bible for his Christian fascist followers. He invoked the Second Amendment to call out his armed vigilante militias, threatened to send the U.S. military into the streets to restore a fascist “law and order,” and bragged about dispatching “thousands and thousands of heavily armed soldiers” into D.C.

Yet the people have not cowered. In the face of all the tear gas and rubber bullets, the curfews and threats of more firepower, the rulers have proven that they are not all-powerful. For the first time under this regime, the people have seized the initiative and have not let go. In contrast to the hate and bigotry of the Trump/Pence regime, these protests are infused with a love for humanity, and those in power seem more out of touch and illegitimate by the day. The splits at the top, even among conservatives, have sharpened up. A determined struggle that doesn’t yield and won’t be provoked has created a serious political crisis. This is how regimes around the world have been forced out of power.

If Not Now, When?

We cannot allow the Trump/Pence regime to drop the hammer and impose military rule. This will lead to a further consolidation of fascist power and a nightmare for humanity and the planet. Every move the regime makes to kill this uprising must be met with an even greater mass outpouring, in which the resolve of the protesters against police murder is strengthened with a growing defiant chorus resounding across the country: Fuck Trump!

Nor can we wait until November, when talk of election cancellation or Trump’s refusal to leave office is a common point of conversation. Now, when people are in the streets, beginning to feel their own strength, we need to add to the struggle this demand: Trump/Pence Out Now!

This fascist regime poses a catastrophic danger to the whole world, and the whole world will take heart if we rise to another level of determined resistance. We have begun, but should we fail to see it through, this and every struggle for justice will be set back. If we succeed – and we can succeed – we can begin to force the boots of violent oppressors off the necks of our brothers and sisters. Let us change the course of history, not for ourselves alone but for all humanity.

This nightmare must end.
The Trump/Pence regime must go!
In the name of humanity, we refuse to accept a fascist America.