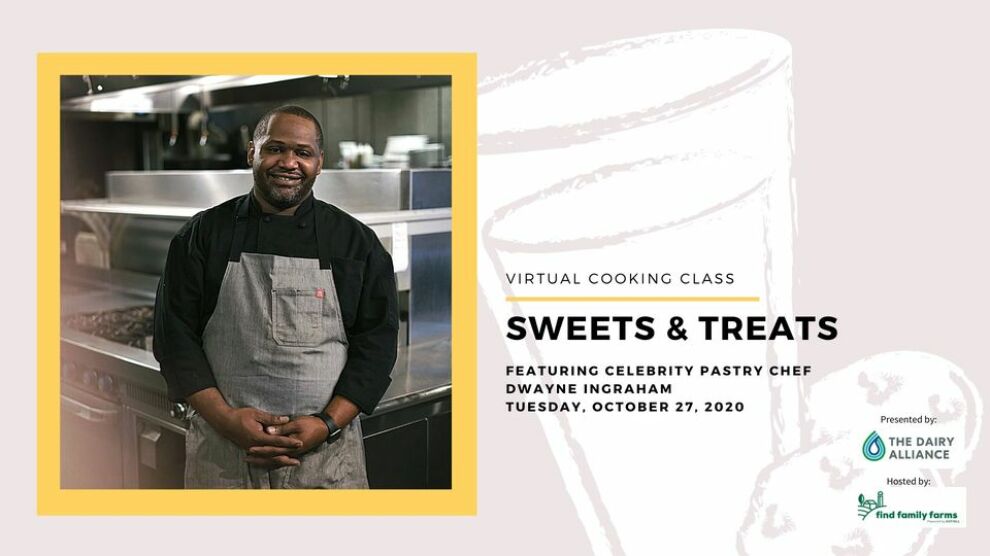 Reserve your spot by Sunday, October 25 to receive recipes in advance, PLUS be entered to win a special gift from
The Dairy Alliance.

Named Best Baker in America, pastry chef Dwayne Ingraham is Chopped Sweets Season 2 Winner (2020) among many other accolades! He is author of Wee, Chef, a children's book series releasing fall 2020. Each story shares the fun creation of a new dish, referencing culinary tools and utilizing cooking methodology that can be made by aspiring chefs in any kitchen.

Originally from Boothville, Louisiana, Chef Dwayne was born into a family of Southern cooks. He received his formal education from New England Culinary Institute in Vermont in Baking and Pastry Arts. He later honed his pastry and plating skills at The Ritz Carlton in Sarasota, Florida before moving to Las Vegas. With positions at The MGM Grand and Wynn, Dwayne was able to perfect his kitchen speed and technique in volume production.

In 2012, he was honored as one of FOOD & WINE magazine's People’s Best New Pastry Chefs and in 2015, he won Food Network’s Cutthroat Kitchen: Alton and the Chocolate Factory. He later followed up his win as a finalist on Food Network’s Spring Baking Championship. In 2016, he competed in Cutthroat Kitchen’s 50’s Time Warp Tournament and won People's Choice Best Dessert at Sweetest Chefs of the South hosted by EATYALL. In the fall of 2017, he won the premier season and title of BEST BAKER IN AMERICA. In 2019, he served as Guest Judge on Food Network's Christmas Cookie Challenge. His accolades have been published in a variety of print and online publications, most recently Southern Living magazine.

Don't forget to PREREGISTER for this event, so you can cook along with Chef Dwayne during this family-friendly, interactive baking session just in time for Halloween!!