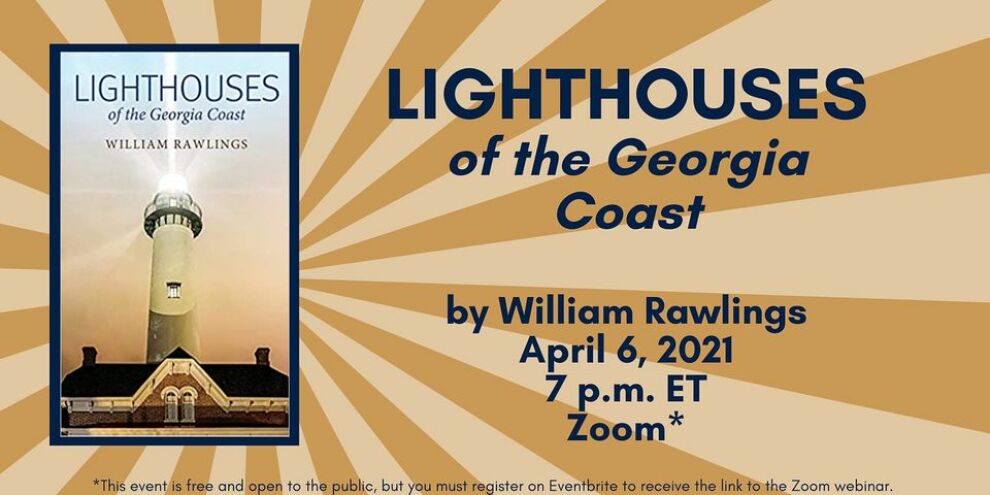 Courtesy of Georgia Center for the Book at DCPL
Cost: Free

Join us for a discussion with William Rawlings about his new book Lighthouses of the Georgia Coast, a fascinating book about these magnificent structures that is richly illustrated with both contemporary and historical photos.

Once an essential part of nautical navigation and commerce, the world's lighthouses have become historical relics of days past, their primary function now replaced by modern technology. Yet they continue to fascinate us, not only for their intrinsic beauty, but also as monuments to our shared history, and as symbols of hope and salvation to those cast adrift on the stormy seas of life. From the mid-eighteenth through the early twentieth centuries, the waterways of coastal Georgia from the St. Marys River in the south to the Savannah River in the north were an integral part of the state's economy. Georgia's barrier islands are today the site of five existing lighthouses, each with its own unique style, history, and role in events over the past decades and centuries.

William Rawlings was born, raised, and lives in Sandersville, Georgia, home to his family for more than two centuries. His first five books were suspense novels set in rural Georgia. Turning then to non-fiction, he is the author of three subsequent works of Georgia (and Southern) history published by Mercer University Press. His books consistently garner excellent reviews, and he has been the recipient of a number of writing awards. One constant theme in Rawlings's writing is a well-defined sense of place, especially in relation to the landscape of rural Georgia. He states, "One of life's greatest pageants is the continuity of life in small Southern towns. Characters wander in and out, plying their intrigues and playing their roles, both major and minor. There's hardly a need for fiction, as the truth is oftentimes more bizarre. What more inspiration could a writer ask for?" This approach to the floating opera of Southern life adds dimension and depth to Rawlings's books. His most recent works include a suspense novel set in Savannah titled, The Girl with Kaleidoscope Eyes, and a true-crime thriller Six Inches Deeper. Lighthouses of the Georgia Coast is his eleventh book.