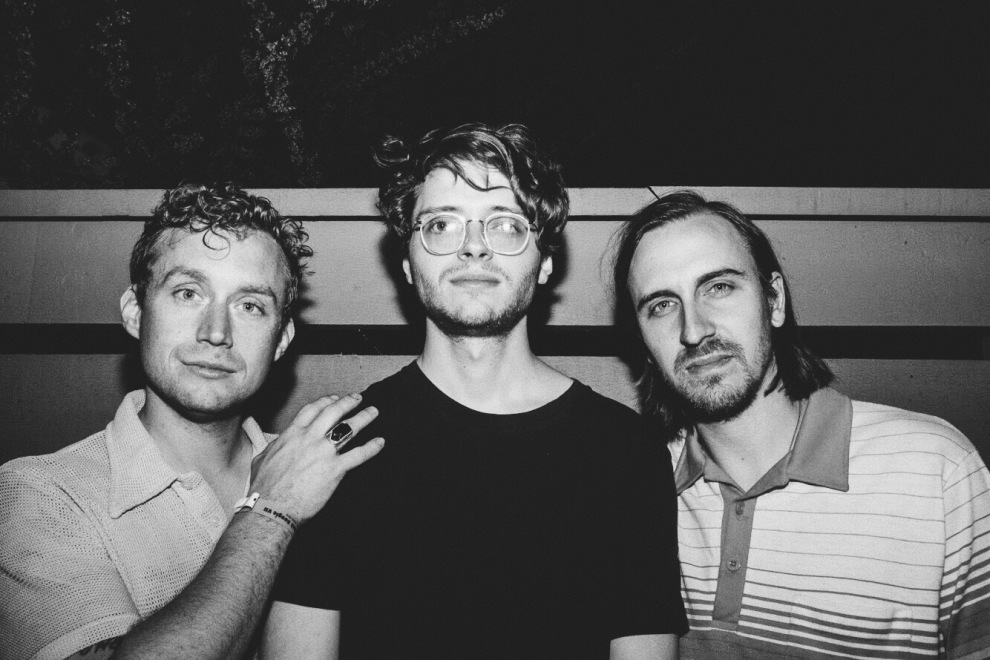 "Halfway through “Southbound Station,” the opening song on Omni’s second album Multi-task, bassist Philip Frobos sings, “I’m just waiting on the vibration.” He’s talking about a text message he’s expecting—definitely not about his group’s music. This Atlanta, Ga. trio never hesitates to get things moving. Their sound is all quivers and shakes and spasms, filled with wiry guitar chords, nervy basslines, and jolting beats. Every track is pithy and pointed to a nearly obsessive-compulsive degree. Only one of the album’s 11 songs lasts longer than three minutes, and the band always starts in high gear, revving hard before quickly reloading. This brand of restless kinetics could induce listener fatigue, but, much like the best purveyors of musical caffeination—Wire, Devo, Talking Heads—Omni avoid tedium by never forcing the action. They sell their nervous energy not as affectation or aesthetic statement, but simply as a logical way of dealing with the world. That was true on their 2016 debut, Deluxe, but on Multi-task they’ve honed their sound to the point where it’s hard to imagine them playing anything that doesn’t take sharp turns or hit abrupt stops. Omni’s sonic signature is aided by Frobos’ subdued vocals. Compared to the high-strung yelps of Mark Mothersbaugh or the geeky tremble of David Byrne, Frobos’ voice is decidedly deadpan, delivered in a semi-monotone as if he’s the calm center of a musical storm. At times it seems he views the music swirling around him as a surreal dream, and the only way to handle it is to stay cool and go with his band’s jagged flow. Frobos’ vocal chill is matched by his lyrics, which share Byrne’s knack for treating daily life like an alien puzzle. Many of Multi-task’s songs are about people meeting and relating, and Frobos often sounds perplexed that anyone ever manages to connect. During “Tuxedo Blues,” he begs a comrade to “speak out, say what you mean, without parting the sea”; in “Calling Direct,” his attempts to reach out are so frustrated that he decides he has to “stage a coup to get to you.” Eventually, in the skeptical “Date Night,” he questions the whole concept of shared experience: “When I’m looking are you seeing/Someone in a different light, another being?” All these laments fit music that’s aptly off-kilter, finding angles and divots where other bands might smooth things out. Many of those angles are the sum of Omni’s parts, as Frobos’ rubbery bass meshes with Frankie Broyles’ guitar playing and drumming (the group were between drummers when recording Multi-task, and have since enlisted Doug Bleichner of Warehouse in the role). But Broyles, a former member of Deerhunter, is often the star, slashing across the songs like a spark plug firing an engine. He’s particularly adept at chopping chords and chiming notes simultaneously, so his complex leads have a visceral thrust. On the herky-jerky “Choke,” his guitar sounds both threatening and joyous, while during the escalating “Supermoon,” he keeps his foot on the riff pedal while also weaving detailed lines. His synergy with Frobos comes to a head on closer “Type,” which displays the strengths of Omni in miniature: dodging momentum, confident swing, rough precision. But then miniatures are what this band does best, building small choices into an exhilarating whole." -Pitchfork
More information