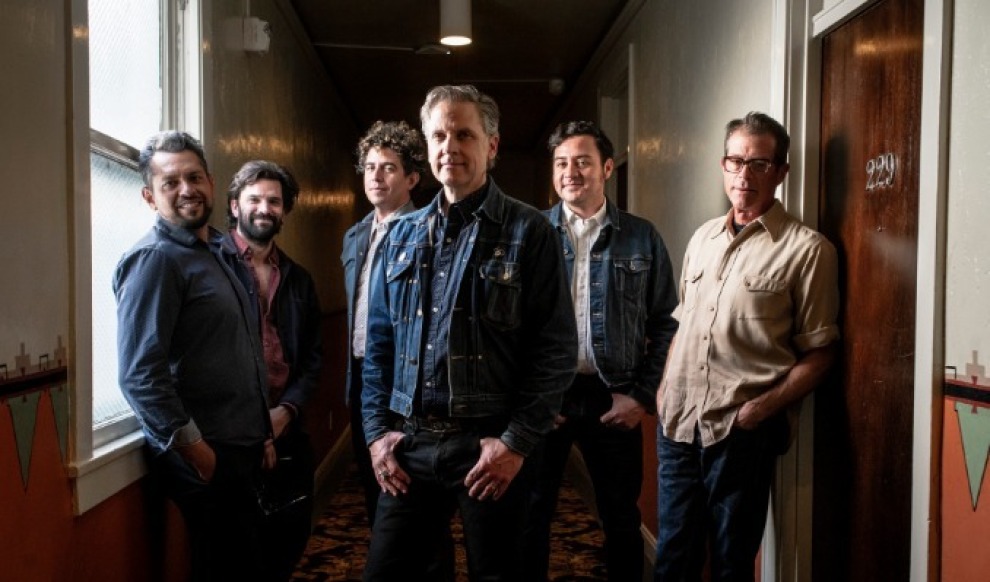 CL RECOMMENDS
CL Critic Hal Horowitz Recommends: Joey Burns and John Convertino remain at the helm of this iconic Americana outfit who have been pushing boundaries since 1997, releasing music that, as their name suggests, combines American influences with Latin sounds. They haven’t always been successful, and some of their experiments don’t always deliver (2020’s Christmas album being one of them), but this year’s El Mirador finds them in fine form — for any edgy, idiosyncratic indie act to persevere for over a quarter century is awfully impressive. — HH

Calexico's Joey Burns and John Convertino return in 2022 with their luminous 10th studio album, El Mirador; a hopeful, kaleidoscopic beacon of rock, bluesy ruminations and Latin American sounds, to be released on April 8. Convening at longtime bandmate Sergio Mendoza's home studio in Tucson, Arizona, the ensemble recorded throughout the summer of 2021, crafting one of their most riveting and whimsical productions to date. Convertino, who now resides in El Paso, and Burns, who relocated to Boise in 2020, channeled cherished memories of Southwestern landscapes and joyful barrio melting pots into an evocative love letter to the desert borderlands that nourished them for over 20 years. "El Mirador is dedicated to family, friends and community," says Burns; singer, multi-instrumentalist and co-founder of Calexico. "The pandemic highlighted all the ways we need each other, and music happens to be my way of building bridges and encouraging inclusiveness and positivity. That comes along with sadness and melancholy, but music sparks change and movement." Oscillating between haunting desert noirs and buoyant jolts of cumbia and Cuban son, the album is permeated by longing. The title track conjures images of a lighthouse, beckoning to lost souls in the night with hypnotic bass lines and cascading percussion. That same search for meaning and safety carries over onto "Cumbia Peninsula," a soaring dance floor epic about confronting our fear of the unknown. The song weaves themes of immigration, a world in turmoil, and the virulent manipulation of information; never offering a diagnosis but wholeheartedly advocating for unity and compassion as a treatment for our social ills. "El Mirador" features gossamer vocals from Guatemalan singer-songwriter Gaby Moreno, while Spanish rocker Jairo Zavala brings his signature bravado to "Cumbia Peninsula." By working with friends and recurring collaborators, Calexico also highlights the unique social and linguistic intersections at the US-Mexico border and the magnificent possibilities of a borderless world. "The album is trying to convey openness," adds Burns. "Look around you. If you're in the North, you need a South to live in balance. We're all breathing together." "There is romance in this music," says Convertino, Calexico's drummer and fellow co-founder. "When I was driving out to Tucson to work with Sergio and Joey, I didn't have any specific song ideas in mind. I was searching for a vibe and a mood." The instrumental "Turquoise" perfectly captures El Mirador's atmospheric universe, where swirling rhythm guitars and distant horns recall dark, heavy skies, almost echoing the record-setting monsoon season that engulfed Arizona during their studio sessions. Burns and Convertino have been performing together for over 30 years, sharing a deep love of jazz and usually building songs on a foundation of bass and drums. But all these years later, Calexico is still breaking new ground. El Mirador showcases a sunnier side of the band, cutting through two years of pandemic fog with a blast of danceable optimism. Writing and recording alongside Sergio Mendoza (keys, accordion, percussion), the album expands on long running influences of cumbia, mariachi and the plethora of diaspora sounds flourishing throughout the Southwest. "I've been playing with Calexico for about 15 years, and I admire Joey and John's constant search for new sounds," reflects Mendoza, who's newly built home studio became a refuge for the band and reduced pandemic risks while fostering a more organic creative process. "After so many albums," he adds, "I'm really proud we were able to achieve something so fresh together." Mendoza was born and raised in Nogales, where he soaked up the classic cumbias, rancheras and corridos that soundtrack daily life at the border. This rich melange of influences translates into the effervescent "The El Burro Song," complete with mariachi strings, slide guitars and zapateado performance that transports the listener to a papel picado-decorated backyard party. On "Liberada," piano and Cuban percussion provide an exuberant canvas for a universal tale of resilience, where even in the face of adversity, celebrating your uncle's 80th birthday always comes first. Calexico delivers one of their most loving desert anthems on "Cumbia del Polvo," enlisting a production assist from frequent collaborator Camilo Lara, who infuses the song with his signature wizardry of electronic beats, organic instrumentation and otherworldly backing vocals. El Mirador's all-star guest list is rounded out by poet Pieta Brown, who wrote "El Paso" and "Then You Might See," as well as Iron & Wine's Sam Beam, who provides backing vocals on the fluttering choruses of "Harness The Wind." El Mirador stands both as a lookout point and beacon in the dark; an opportunity to search inwards, ponder our connections to the Earth and its people, and hopefully illuminate a path forward. After decades on the road Calexico's music remains boundless and romantic, still gazing upon the horizon in search of their next adventure.
More information