A Q&A with the New York City-based toy piano troubadour.

There is little that’s conventional about Alexa Dexa. Performing what she calls “toychestral pop music,” she tours relentlessly outside her New York City home by MegaBus. She’s self-booked, self-recorded, and self-promoted. Her tours cost as little as $36 to complete. Unarguably, she personifies DIY for the millennium.

Dexa travels light — a collection of toy pianos, homemade beats on an iPod, pitched desk bells, and a few other oddities round out her set up. The tools might be compact, but they’re manipulated far beyond their initial limitations. On stage, she balances delicate instrumentation with rich, jazzy vocals. The sound is haunting and ambient, and often defined by soft, subtle hooks.

While en route to play the Star Bar's Little Vinyl Lounge tonight Fri., March 11, Dexa checked in to talk more about her craft.

You’re currently traveling by MegaBus. What prompted you to tour this way? How is that going?

I discovered the glory and ease of dollar bus tickets while attending Berklee College of Music, which had me going back and forth between Boston and New York every few months. Since my tour set up is incredibly self-contained (an 18-key Schoenhut toy piano and a 40 liter Deuter backpack), the progression to using MegaBus to reach other cities around the US was pretty natural. This is my 8th self-booked DIY tour using MegaBus and similar low-cost transit options to get around. With an overhead cost as low as $36 to travel the whole eastern half of the United States, it doesn't make sense for me to travel any other way.

I'll be honest, last night I took the overnight bus from DC to ATL and that was a bit rough. You have to have a certain level of tolerance and endurance to take an overnight bus and keep moving the next day. But otherwise I really love the bus! I don't have to worry about directions, being too tired to drive, and there's no liability on my part for break-downs or the like. It's a stress-free zen-zone where I can just enjoy the scenery and contemplate my existence. 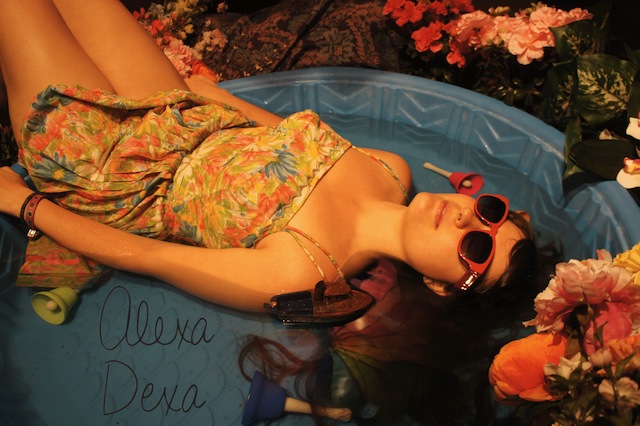 I’m aware of the challenges of touring: Getting people to shows, keeping mental and physical health in check, trying to break even, and more. How do you combat these things?


Those are definitely real challenges for me! Luckily breaking even is facilitated by very low overhead in the transit department. It's also a big help that I have a few friends in all the cities I go to, so I don't have to worry about staying in a hotel and I have the added benefit of being surrounded by people I love at every stop along the way.

I've learned the hard way that it's imperative that I listen to my body when I'm touring. I have to be careful that I don't push myself too hard in the interest of seeing new things. Sometimes it's better to spend the day sitting in a park or in a coffee shop reading and taking it easy in order to preserve my back from the burden of carrying my pack here and there all day. One of my friends once told me that it's important to find some way of keeping yourself grounded while you travel. That really resonates with me. I like to keep a small semblance of a routine like stretching twice a day, spending time exploring outside, and leaving some time set aside to take care of business matters (and of course to play my shows!). That helps me keep a level head while I'm on tour.

What have been the best cities you’ve played recently?

In January, I did a mini-tour up the east coast from Tampa to NY, an itinerary spawned from my participation in the Florida International Toy Piano Festival. I had an amazing time playing the Earl with Jeffrey Bützer and Bowie in Sweats here in Atlanta. I also loved playing in Charlotte where everyone is just so friendly and attentive. I always feel at home there!

Your music, which you refer to as “toychestral electronic pop,” doesn’t have many precedents. How do you explain what you do to people who have no immediate reference points?

It is a phenomenal experience to try to explain what kind of music I'm making. I've heard from a lot of first-time audience members that the look of my toy instruments combined with my soft-spoken speaking voice had them expecting something utterly different than what they ended up hearing. Oftentimes there's a wave of surprise that a sound so strong and anything but childish comes out of a 25-year-old that is constantly confused for a 15-year-old.

I like to tell people that I perform with a toy piano and pitched desk bells marketed towards children, I make electronic beats, and sing. Those words don't exactly do the sounds I make much justice, but the interest is usually there. I've heard people compare me to Portishead and Bjork and I'm flattered by those references. But the sound is still something you just have to hear!

Do you find it difficult to connect with similar artists nationally or is there a vibrant toy musician scene spread throughout the country?

It's somewhat hard to connect with similar artists nationally as there aren't many that are super similar to me. However, when I find toy-piano-inspired artists, I'm humbled by how helpful and supportive they are and how wonderful it is to join their network. There is a great music scene for toy pianists in pockets of America (mostly NY, ATL, Tampa, and LA), Canada, and Germany, with new places cropping up here and there.

Most of the scene is a bit more avant-garde classical, which I identify with and also write for but isn't quite indicative of my toychestral electronic pop project. So when I go on tour I also like to reach out to other female producers and performers that make their own tracks and have a unique sound. They may not play toys, but stylistically the nature is similar and interesting.

What are your plans for the future? Do you plan to tour the same way next go round?

Well my current Manifest Destiny Tour has me on the road until May 2. I'll be ending my tour at the ASCAP Expo in LA where I hope to meet with some festival booking agents and music licensing supervisors. After that, I'll be planning my second international tour through Europe and Scandinavia for June and July. Around September and October I hope to tour South Korea, Japan, Australia, and New Zealand. After that, I'll be recording my next two albums in my recording studio, Rawhide Records! Always plenty to plan for and to do!

And yes, you can be sure I'll be riding the cheapest bus around no matter what state or country I'm in.