The 2014 SweetWater 420 Festival at Chandler Park in Atlanta 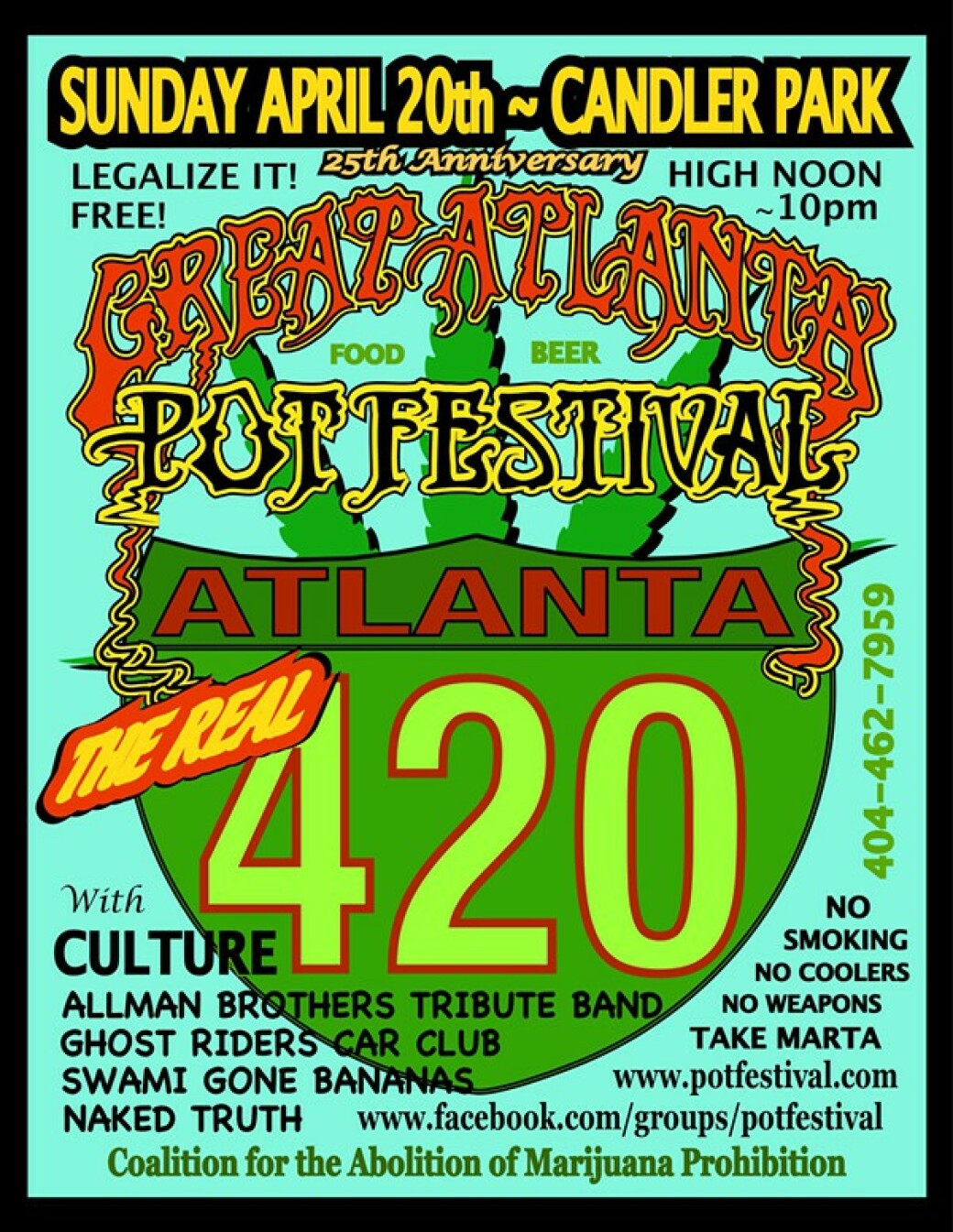 Later this month, for the first time in its more than 10-year history, Sweetwater's 420 Fest will welcome thousands of people from around the metro region into Centennial Olympic Park. Around the same time and across town in Candler Park, the Great Atlanta Pot Festival will celebrate its 25th anniversary. A merry time will surely be had by all.

But Sweetwater Brewing Company is apparently not too pleased with the promotional materials and branding the pot festival is using. And Paul Cornwell, a longtime marijuana reform advocate and Candler Park resident who's been organizing the daylong celebration of the wonder plant since the festival's beginning, isn't budging.

On Friday, Stephen Schaetzel, Sweetwater's trademark counsel sent Cornwell a letter that claims the longtime marijuana reform advocate was allegedly "attempting to piggyback" on Sweetwater's "famous" trademarks by using a "420 Highway Sign" and "The Real 420 Festival" designation. Those two terms are among a "family of '420 Marks'" - along with '420' - owned by the local brewery.

Schaetzel wrote: "While we appreciate the attempted indirect compliment, we are concerned that people might be confused into thinking that Sweetwater is in some way affiliated with your festival; especially since your festival will occur near the same time in the same place as the Sweetwater '420 Fest' Festival in the former location of the Sweetwater Festival." The beer company is also concerned, Schaetzel said, because Cornwell's use could "dilute the strength" of Sweetwater's trademarks. He said the pot festival still hasn't received the final OK from the city and that people could think Sweetwater's festival was "unauthorized."

Sweetwater has offered Cornwell up to $1,000 to cover the cost of printing new promotional materials. Regardless, the brewer gave him until the end of business on Monday to cease and desist. If not, the company will take him to court.

Cornwell says he has no plans to do so. In a letter, he's telling Schaetzel he feels confident that the public wouldn't be confused between the two events. The organizer says he was "careful not to use any references to the beer that is marketed under the 'Sweetwater 420' trademarks. Nor is their any similarity of art or logos that could be mistaken for your clients use of intellectual property." (We also haven't been able to find where Cornwell uses the phrase "The Real 420 Festival" - just "The Real 420.")

If Schaetzel's clients still felt there was some confusion between the two events, he writes, he would be open to placing a disclaimer on its promo materials. But Sweetwater 420 would have to do the same, "making clear in their media to our 'cannabis culture' supporters that their event has no relation to our efforts to reform cannabis law in Georgia or in the U.S., and that their use of '420' in no way pertains to the popular use of the term by the cannabis culture."

"I appreciate Sweetwater 420's attempt to 'ride the wave' and take advantage of all the hard work cannabis activists have invested to build a '420' brand for the cannabis reform movement," Cornwell wrote. "But to pretend that they own the '420' is preposterous and indicates they really want to profit off the 'backs' of thousand who have promoted '420' for over forty years as a rally cry for reform." The "420 Highway," Cornwell says, has been in the public domain since the early 1970s and doesn't resemble the company's trademarked artwork.

In addition, numerous other festivals are tied to the 420 movement, he said. Instead of fighting over trademarks, Cornwell told Schaetzel, he invited Sweetwater to donate beer to the Great Atlanta Pot Festival and post banners. Or "join our efforts for reform in Georgia. Certainly they have more to gain by joining us than to persist in this futile effort to silence the '420' movement in Georgia or any of the 50 states that make these United States."

We asked Schaetzel for updates via email and voicemail. We also reached out to Sweetwater. We will update if we hear back.