The survey shows the county’s attitude toward MARTA is changing. Gwinnett voters have rejected joining the transit agency three times over the decades — most recently in 2008, in a nonbinding poll.


The study randomly sampled a total of 502 Gwinnett County citizens. Female participants outnumbered males by 10 percent, and there were twice as many white participants than African-American participants. Fourteen percent of the respondents identified as “other.”

Gwinnett, Georgia’s second most populous county, has changed dramatically in population and demographics since it first considered joining MARTA. The number of residents has more than doubled since 1990 to more than 870,000 today, according to a U.S. Census estimate. Nearly 25 percent of its residents were born in another country, the Atlanta Regional Commission says (PDF). Whites make up less than 45 percent of the population, according to 2010 census data.

Transit advocates such as Lee Biola, the president of Citizens for Progressive Transit, called the poll numbers an overall encouraging sign.

“New rail lines in Gwinnett would encourage walkable communities along the rail line and give Gwinnett residents a way out of traffic,” Biola said. “The regional transportation plan includes some great options for Gwinnett. MARTA could make these lines on a map reality.”

Added Colleen Kiernan of the Georgia Sierra Club: “I’m not surprised but I’m very pleased with the poll’s results. I think it’s showing what the market is demanding,” Kiernan said.

In many parts of metro Atlanta residents and businesses are showing a strong desire for more transit options. Clayton County voters recently approved a 1-percent sales tax to fund MARTA bus service — and one day, transit officials say, rail. Businesses are relocating and expanding operations in areas that are served by transit. Even Republican mayors outside the urban core are pushing for more mobility options.

The study found the strongest support for expansion in the southern part of the county in Districts 2 and 3, with 70 percent and 65 percent approval, respectively. “The groups with the strongest opposition to expansion are Conservatives, Republicans, and voters living further north in the county,” the report states. 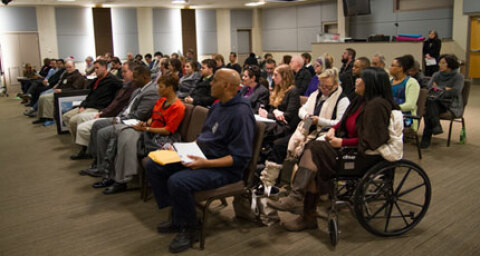