The pothole-prone intown highway is in for an overhaul - of some sort. 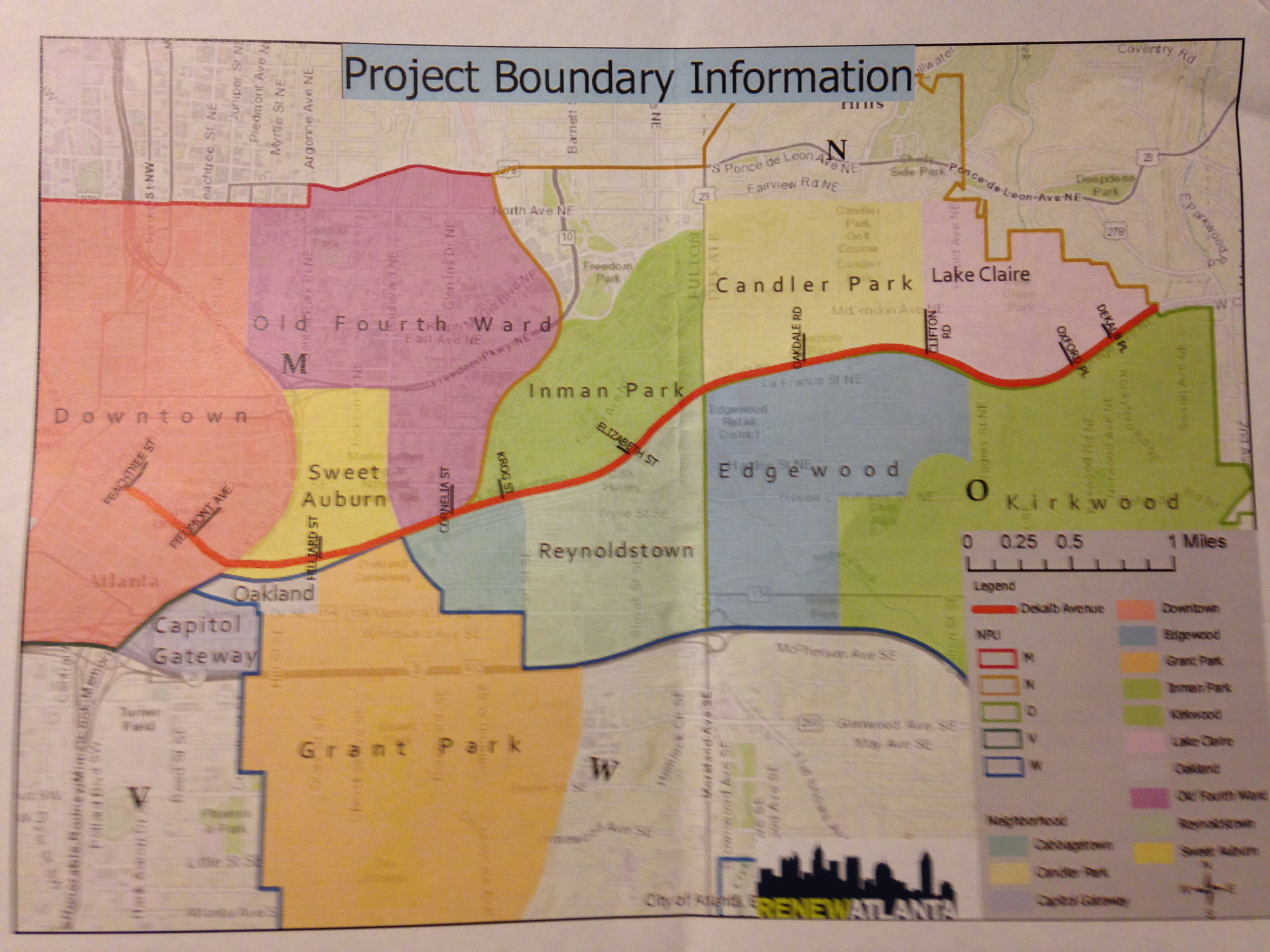 As many as 13,000 motorists every day travel along DeKalb Avenue, the east-west thoroughfare connecting Decatur to Atlanta. It's not a pleasant commute; the street is littered with potholes, features an appropriately named "suicide lane," and leaves little room for bicyclists or pedestrians. And its design encourages speeding. But a change is a-comin'.

In the heart of Sweet Auburn on Thursday night, approximately 300 people met in a church sanctuary to tell City Hall officials what they want done with millions of dollars in public money meant for DeKalb Avenue. Key to the process is whether an automobile artery should make room for bicyclists and what the final outcome will look like.

While ideas ranged from burying MARTA to building a raised bike/pedestrian path, there’s one thing probably everybody agreed on: The poorly marked “suicide lane” in the middle is out of place, and it’s not unusual to see cars sitting in it, facing oncoming traffic.

“Folks from out of town get in the reversible lane thinking it’s a turning lane,” said Farrah Glasgow, who says she sees that happen when people visit the soccer fields near Arizona Avenue.

One man got applause when he told city officials that the signs marking the reversible lane are too far apart.

Atlanta called the meeting to collect public input on what projects should be done on DeKalb Avenue — a Downtown portion is called Decatur Street — between Peachtree Street and the Atlanta city limits near the East Lake MARTA station.  City voters approved the Renew Atlanta bond package in 2015 that will pay for projects to include resurfacing, reversible lane removal and sidewalk fixes.  Separately, another tax approved by voters on November 8 will generate cash for a multiple-use trail from Inman Park to Rocky Ford Road.

Parts of the route have been trod since the days when Atlanta was Terminus. It roughly parallels the railroad tracks that lead from Decatur. And the street can sure feel like it’s got all the irregularities of more than 150 years.  In addition to the potholes, DeKalb is kind of crooked and lumpy; and roomy and wide in some parts and narrow in others.

Cyclists and pedestrians complain as drivers do. In fact, Glasgow said her primary reason for coming out to the meeting was to hear about ideas for bike safety, for the sake of her cycling son.

At the meeting, consultants and city planners handed out information, talked to folks over big maps showing the route and traffic and wrecks and other data.  Visitors voted on what’s a problem or needs attention by sticking stickers on problem spots. Faye DiMassimo, manager of the Renew Atlanta bond program, said the city was not taking a “traditional” approach by simply asking how to fix what’s in the corridor. She asked the audience to imagine erasing the corridor.

Near the front, Nick Imerman sat one pew away from Heath and Jennifer Williams. But they didn’t agree on what the corridor needs.

“It’s a road that doesn’t really work right now,” said Imerman. He said it’s dangerous for drivers, cyclists, even pedestrians on the irregular sidewalks. Imerman said the “status quo” won’t help — with all the apartments going up, if all the new residents drive, it’ll be a total standstill.  He said it should have a turn lane, wide sidewalks and space for bikes. That way there are some alternative ways to get down the road.

But the Williams drive that same road to get to work and don’t want changes that might see their commute lengthened.

“This is how at least 10,000 cars get to work every day,” Heath said.  He said keeping cars on that road is a very serious matter for a lot of people... "I don’t have anything against bikes, but this is how people get to work.”

According to the consultants’ count, indeed, as many as 3,100 cars go through key intersections the east part of the corridor each hour during rush hour.  In that same section during rush hour, the bike and pedestrian count is something like maybe 30 folks per hour, one of the city’s consultants told the crowd. In and near Downtown, the bike and pedestrian traffic increases, though it never catches up to the car traffic, according to consultants’ maps.

"I think on DeKalb what we could see is a true complete street," said Rebecca Serna, executive director of the Atlanta Bicycle Coalition.

A "complete street" is one that is designed to be shared among drivers, cyclists, pedestrians and transit users. It's not what DeKalb Avenue is now: a road where drivers floor it once they get out from behind red lights or the one person who stops traffic to make a life-threatening left turn.

"We have a street where we've prioritized speed over safety when really as a city we need to be prioritizing safety over speed," said Serna.

There's no one blueprint for what a complete street looks like, but it is calmer than what DeKalb is now and can include things like commodious transit stops, sidewalks in good repair, refuge islands in the middle of the road at key crossings, and bike lanes that are either separate from the road or part of it.

Imerman said he thinks that broadly right now, Atlanta is deciding if it’s to be a metro that people drive through or that they live in. “It’s an interesting time in the city,” he said.

DiMassimo said this the very beginning of the process for DeKalb, and that the city will sift through the feedback and have another public meeting with some concrete proposals.

NOTE: This article has been altered to correct an editor's error. The city estimates that 10,000 to 13,100 motorists use DeKalb Avenue everyday.