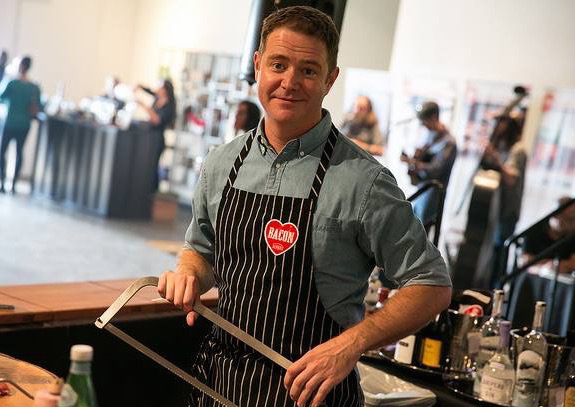 Photo credit:
He’s more than the blue-eyed baby face and sweet smile you see at first glance. Pine Street Market’s Rusty Bowers is a butcher and a teensy bit of a philosopher who etches his ongoing personal paradigm of transformation onto his skin.

Bowers' first tattoo, a phoenix rising over his left shoulder, was to commemorate the decision he and his brother made to travel the world for a few years after a family trip to Italy. Those experiences led to a love for cooking and butchering as he cooked his way through Hawaii, Austria, and Turkey, and later graduated from the Culinary Institute of America. The flavor of heritage breed pigs resonated with him. Back in Atlanta, as a sous chef for Buckhead’s erstwhile fine dining standby Pano’s and Paul’s, he continued to seek out the pure flavors of his fixings.

Shopping for ingredients at Morningside Farmers Market one day, Bowers encountered the farmers from Riverview Farms. “I met Wes and Charlotte back in 2007,” he recalls, “and seeing what they can do for farming was one of my inspirations for starting Pine Street Market.”

Opened in 2008, Pine Street Market started production in 2009, selling hand-cut meats from humanely raised pigs. Bowers’ bacon, made from Berkshire pastured pork rubbed with blackstrap molasses and Vermont maple syrup and smoked over applewood, has few equals. “Riverview produces the best pork,” says Bowers. “Not just the best pork locally or in the Southeast, but the best. They grow their own feed. They are the best pig farmers I have ever met.”

Next up, Bowers will partner with Riverview Farms to open Atlanta’s first farmer-owned butcher shop — Chop Shop. To celebrate these new beginnings along with Pine Street Market’s most profitable year yet, Bowers took his sales manager, Jen Koval, with him to Memorial Tattoo. There, owner and quarter century tattooing veteran Phil Colvin put needle to skin.

Bowers’ right arm now bears a circular stamp with Pine Street Market’s USDA number — 34832. It's designed to look like the inspection stamp Riverview puts onto their raw meat with food grade dye. “It’s the same stamp as on the pigs,” says Bowers. “To me butchery/cooking is about the whole animal, so now I am even using the stamp. It’s a closed loop — a beautiful thing for me and just what we will do at Chop Shop.”

No value assignedWhile talking about Pine Street Market’s growth, Bowers unconsciously touches his arm in a circular motion over the tattoo. The journey is clearly translated onto his skin. “It represents us finally grabbing ahold of Pine Street Market and finally ready for the next phase,” he explains. Sipping his pilsner, he roughly quotes Aristotle: The aim of art is “to represent not the outward appearance of things, but their inward significance.”

Slated to open this July on Memorial Drive, Chop Shop will be more of a high-end retail store with meat produced at Pine Street Market. They will sell not only Riverview pork, but their full line of beef, CSA boxes, grains, and vegetables.

Bowers plans on beer and wine pairings with chefs Ryan Smith (Staplehouse), Terry Koval (Wrecking Bar), and Nick Melvin (Venkman’s), and anticipates more demos on a porch filled with Big Green Eggs. He even has a five-year prosciutto ready to slice at the grand opening. It’s been along for the journey too.