Cast Iron Chronicles heads to the Beard House, challenging myths around soul food, gender, and race in the food industry 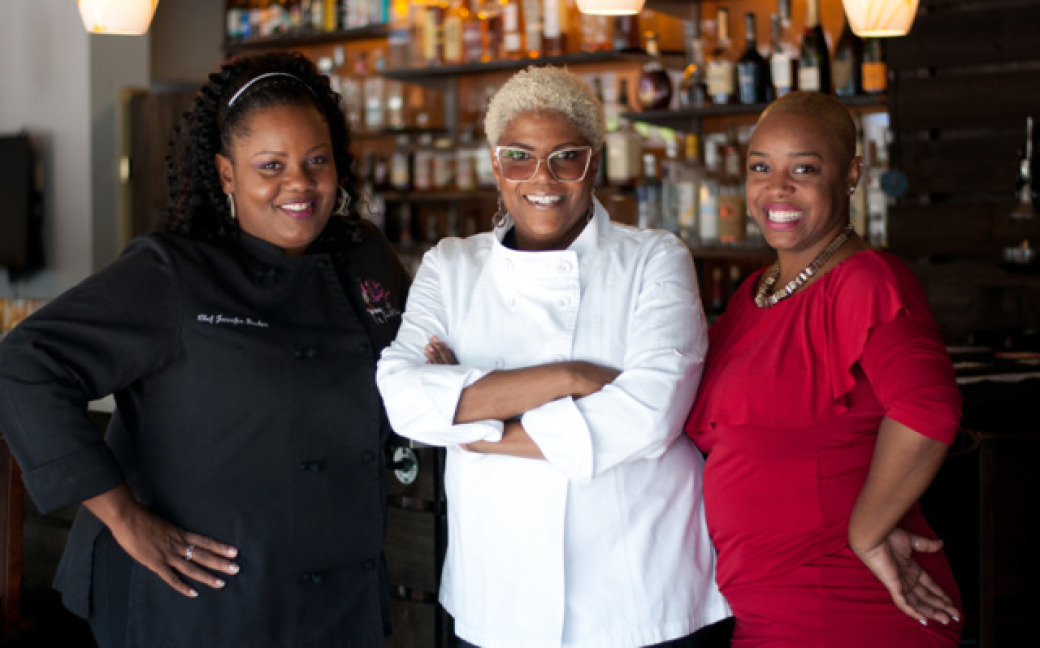 Photo credit: Shelby Light
WOMEN ON TOP: The Cast Iron Chronicles team is made up of long-time industry professionals (from left) Jennifer Hill Booker, Deborah VanTrece, and Tiffanie Barriere.
By Osayi Endolyn Sunday February 4, 2018 07:59 PM EST
At a recent food conference in Savannah, chef Deborah VanTrece had an all too familiar encounter. “A white male chef told me I didn’t belong there, and to go back to Atlanta,” she recalls. The incident was just the latest on an endless list of silent stares, overt comments, and outright dismissals that she’s experienced throughout her career as a black female chef. All convey the same myth: Women don’t belong in professional kitchens, and the opportunities available to marquee chefs belong mostly to white guys.

VanTrece’s experience is not unique. Personal chef and cookbook author Jennifer Hill Booker and mixologist Tiffanie Barriere recount similar instances throughout their careers. The three women connected after being jointly featured in an NBC News article that highlighted their participation at the Atlanta Food & Wine Festival in 2017 (and all three sit on the festival’s recently announced all-female advisory council for 2018). In the months that followed, mutual frustrations and a desire to move the needle led them to launch the collaborative dining series, Cast Iron Chronicles, late last year.

The series began with two local events over the past several months that challenged stereotypes about soul food and encouraged timely conversations about racial and gender inequality in professional kitchens and the food industry at large. It’s a big conversation — so big that the group is taking its act to the James Beard Foundation’s famed Beard House in New York City on Feb. 21, where they’ll conclude the three-part series. The dinner is a long-held dream come true.

Collectively, the three women boast more than 55 years in the industry. VanTrece is the owner and head chef at Twisted Soul Cookhouse and & Pours; Barriere is a freelance bartender known for her creative beverage development (Southern National in Mobile, Alabama; the launch of One Flew South’s bar program); Hill Booker has gained a reputation for her globally-minded takes on Southern cuisine, as detailed in her cookbook, ''Field Peas to Foie Gras: Southern Recipes with a French Accent.'' That mastery will be on display for Beard House diners — the bar, as they say, is set high.

The James Beard Foundation represents the preeminent honor in American culinary arts; to host a dinner in the Greenwich Village dining room is to reach a pinnacle moment. For one, a chef doesn’t just book a Beard House event; she must be invited by a selection committee that considers noted chefs throughout the U.S. She receives this invitation only after review of her skill, reputation, and expertise, among other criteria. Current and former Atlanta-based chefs who’ve made the trek include Mihoko Obunai and Joseph Truex, Matthew Basford, Todd Richards, Drew Belline, Adam Evans, Jonathan Fox, Duane Nutter, and Todd Ginsberg.

On a recent phone call, VanTrece expressed gratitude. “It means the world,” she began, pausing to acknowledge that she was still deeply moved. For years, she recalls watching as contemporaries received invitations — often those peers were male. She began to wonder if such an honor was available to her as a black woman chef, an underrepresented group in fine dining. Hill Booker could relate. A Georgia Grown executive chef, she says she was devastated to not represent at the Beard House with the group in 2015. Their journey to the Beard House is meaningful not just because of the professional honor, but because they’re doing it together.

VanTrece, Hill Booker, and Barriere all wish to be judged by the quality of their offerings — they are in service to food, drink, and people. But achievements of this nature are important to observe because doing so recognizes that part of the culinary conversation has been sorely missing. That’s why Cast Iron Chronicles aims to “debunk myths about soul food,” Hill Booker says. “It’s not all cafeteria-style meat-and-threes, fried, and covered in gravy. We’re talking about a cuisine that was created by enslaved Africans, who incorporated their West African cooking traditions and those of their French, German, and Spanish owners.”

Hill Booker studied and cooked professionally in Germany and France in the late ’90s, and notes: “People don’t like to talk about where this food comes from, but we are cooking the food of our ancestors.” The need for this dialogue is crucial, the trio says, especially when women and people of color have to overcome unfairness in funding and investments for restaurants, gaps in competitive pay, poor recruitment efforts at festivals and conferences, lack of mentorship, and sometimes open hostility.

“It’s been interesting to see how ‘soul food’ was appropriated as ‘Southern food,’ where I look up and people are talking about an ‘elevated’ cuisine,” VanTrece says. It’s language that can be heard from restaurant cooking lines to “Top Chef''.” ''The underlying logic, whether intended or not, can convey that a bowl of chitterlings bears less culinary value than pâté en croûte. Cast Iron Chronicles provides a space to question what that assumption means, especially when black chefs are systematically left out of the conversation, despite having originated so much of the history.

It’s true that much of the soul food lexicon derived from people who didn’t have much — collard green potlikker and cornmeal, innovating with meat cuts rejected by white landowners. But what often gets dropped from the narrative is the cooking expertise that Africans brought with them and adapted throughout slavery, Reconstruction, the Jim Crow era, and the Great Migration — from plantation kitchens to segregated hotels and train cars, and so on. These were touted professionals before they were credited as such, and their skills weren’t confined to their jobs; they came home with them, too. Haricot verts in béchamel sauce were just as easily served at a black family’s Sunday dinner as the cook’s white employer’s soirée. Adrian Miller’s latest book, ''The President's Kitchen Cabinet: The Story of the African Americans Who Have Fed Our First Families, from the Washingtons to the Obamas'','' ''explores how this history showed up in the country’s highest office. This is all part of the soul food story.

Cast Iron Chronicles’ invitation to the Beard House is a hallmark that bestows the type of respect chefs want most — the kind they get from heroes and peers. “We’ve always been here,” Barriere says, both of crafting classic drinks and feeling some ownership of Southern food and hospitality. “To go to the Beard House like this, it means they see us for who we are.”