'The Godfathers of Hardcore' looks beyond the music 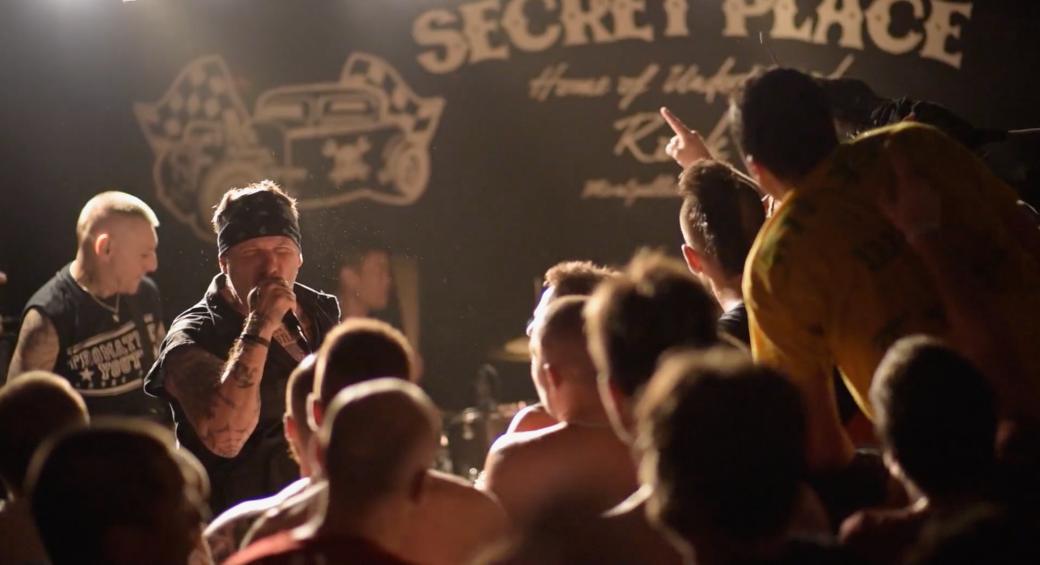 It has been 35 years since Agnostic Front brought New York hardcore to a fine point with 1983’s United Blood EP, and the electrifying speed and anger of 1984’s Victim in Pain. The latter record’s title track comes to an explosive peak with a short, sharp existential quip sung by vocalist Roger Miret: “Open your eyes, don't tell me lies/I'll be the one to live and rise/I'll think for myself and I'm sure to find/That society's rules won't change my mind/But why am I going insane?/Why am I the one to blame?”

Such empowering words, screamed at high velocity to match guitarist Vinnie Stigma’s lacerating riffs, live on as a mantra of sorts. “Victim In Pain” encapsulates the timeless power and energy that arose when anxiety and alienation were transformed into a cathartic musical expression for generations of young, disaffected outsiders who found a sense of community in the hardcore scene.

Amid the cultural dystopia of the 1980s, hardcore, for Agnostic Front, was a way of life — a means of survival — that bred strength and created a the foundation of a community. Miret and Stigma’s experiences growing up on the derelict streets of Manhattan’s Lower East Side shaped their worldview. “My family was always moving a lot, so I never had a solid childhood home, and never really made friends,” Miret says. “I was kind of an introverted kid. Meeting people who were in the punk rock world, and being on the lower east side with a bunch of my friends always felt comfortable — it felt like home. I was for sure 15 years old when I started screaming in my first crazy punk rock band,” he adds. “I joined Agnostic Front in 1983, and the rest is history.”

Agnostic Front played a seminal role in establishing the New York hardcore movement’s anti-war, anti-religion, anti-society, and anti-authoritarian ethos that defined the music in the Reagan era. For nearly four decades Miret and Stigma, who’ve been friends since meeting each other during their teenage years, have stayed true to hardcore’s values, even though their personalities couldn’t be further apart. Miret, 53, was born in Havana, Cuba and moved to the United States when his family fled the Castro regime in the late ’60s. These days he is a humble, contemplative father of three who says that at heart he’s still the rebellious kid he’s always been, but is nowhere nearly as “reckless” as he was when he was 17 years old. His respectful demeanor quietly contrasts with Stigma, 62, who’s an outspoken, lifelong New York wise guy. Together, they’ve found a sense of balance that keeps Agnostic Front perpetually moving forward.

A new documentary film, titled The Godfathers of Hardcore, directed by Ian McFarland, chronicles Agnostic Front’s history and musical legacy, and the personality dynamics that bind the group’s key players as they’ve soldiered through the years, grown older and coped with an ever-changing world.

“I have been a fan of these guys for a very long time,” says McFarland, who developed a close friendship with the group while touring with Agnostic Front, playing bass in the Boston hardcore band Blood For Blood. “I saw a lot in these guys, things they don’t really put out there for other people to see,” he says. “I knew there was an interesting story to tell.”

Breaking the mold of a traditional music documentary, the film tightens its narrative focus on the group’s longest standing members, casting light on their personal lives, and the rewards and hurdles they’ve faced with their own health and stability. The result is an intensely intimate portrait of Miret and Stigma’s life beyond the band and beyond the music.

“They have the band, and they have each other,” McFarland says. “Early on I was thinking of ways to make the film really intimate, and I just wanted to be with these guys at all times. So, we literally moved in with Roger for nine days when we started filming — me and my whole film crew. We stayed at his house and did the same thing with Vinny. I was on stage with them every night, as if I was the 6th member of the band.”

Through it all the band’s members remained outside of the film’s working process, having no say in how McFarland’s narrative took shape. “We trust him,” Miret says. “We’ve come to be pretty close, and we knew if anyone could really tell our story, and present everything as it really is, Ian was the guy to do it, and he did it right.”

Upholding the punk rock M.O., McFarland goes on to say that he made the film “extremely fast.” Naturally, The Godfathers of Hardcore features plenty of songs by Agnostic Front. But to enhance the film’s cinematic qualities, McFarland tapped Los Angeles-based composer Aaron Drake to compose a film score. Drake, who works out of Sound in Space Studios, composed a haunting soundtrack that reaches far beyond punk and hardcore’s shotgun blast approach, adding layers of emotional depth. The soundtrack will be released via a collaboration with Wargod Collective, and is due out as a vinyl LP on April 21, Record Store Day. The Godfathers of Hardcore film is also designated Record Store Day’s Official Film of 2018. This is a significant honor, as the RSD organization chooses from over 400 CD, vinyl, and DVDs released throughout the year, and selects just one title boost on Records Store Day.

“A lot of people don’t understand how much love these guys have for their band and for their scene,” McFarland says. “They genuinely care about everything in the scene, and everybody who sees the film has a similar reaction: Some people say, ‘I didn’t know what to expect, I thought it was just going to be another film about the history of the band.’ I feel like I know these guys and now I wish I had gotten to know them earlier, because I probably would have been listening to them way earlier in life.”

On Thurs., March 8, the Plaza Theatre hosts a one-time screening of The Godfathers of Hardcore, followed by a live Q&A with McFarland along with Agnostic Front’s Miret and Stigma. When all is said and done, there's an after party next door at the Righteous Room. Burnt Hickory Brewing is serving up a limited edition "Cause For Alarm" lemon-lime salted pale ale to mark the occasion.