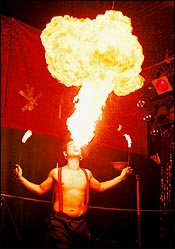 Keith Nelson (aka Mr. Pennygaff, Kinkette the Clown and others), one of the founders and ringmasters for the Bindlestiff Family Cirkus.
By FRANK MULLEN Saturday April 15, 2000 02:34 pm EDT
The Cirkus is coming to town! Wide-eyed children enjoying cotton candy and popcorn, columns of exotic animals dancing to the strains of festive music and everyone's favorite, clowns! Right?

"We put a contemporary spin on things, but a lot of these acts are hundreds of years old," says Stephanie Monseu, also known as Philomena the ringmistress. And they do pay homage to classic circus and sideshow acts, like the human blockhead, sword-swallowing, firebreathing and more. But some the scenes and characters are distinctly The Bindlestiff Family Cirkus's own, like Kinkette the Clown, Scotty the Blue Bunny and an X-rated plate-spinning routine.

In addition to the touring company, the troupe has performed at Coney Island and other old-school sideshow spots. "We worked with [long-time sideshow mogul] Ward Hall last year at the New Jersey State Fair. Keith did sword-swallowing and fire-eating and blockheading, I did the girl-to-gorilla illusion. We got a real taste of what it meant to do 60 or 70 shows a day."

They're not just putting on a shockfest for the pierced-and-inked set - Monseu and Keith Nelson (aka Kinkette, the sword-swallowing Mr. Pennygaff and others), who founded the Cirkus six years ago and share ringmaster duties, recently have incorporated as a non-profit organization and plan to form educational, research and publishing branches to help promote and record the circus arts. Their "Autonomadic Bookmobile" showcases worthy but under-distributed books, comics and magazines that might not otherwise see the light of day. And all of their performers are multi-talented entertainers, in the tradition of classic burlesque and vaudeville acts.

They tailor their show to local venues, skipping the more provocative acts when necessary, and even do kid's performances back home in Brooklyn. "From the beginning, we sought to perform family and all-ages shows. We modify our costumes and our characters, but we're still eating fire, swallowing swords, walking on glass for these kids," says Monseu.

A typical evening with the Bindlestiff Family can get pretty loose, and a recent New Orleans show was filmed by HBO for an upcoming "Real Sex" episode. "During intermission, the show that went on in the audience was wilder than anything that was going on onstage. There were plenty of people getting naked."

Previous tours have been booked in more intimate clubs, and upgrading to larger venues has given them the ability to expand their show. "This last summer, we played several old vaudeville houses that have been restored. We can use bigger props, and it feels like we're carrying on a piece of history," says Monseu. Some of those props include a full-blown aerial routine and an unknown quantity of pyrotechnics.

Monseu recently acquired a set of throwing knives, but she's not quite ready to start pitching them at people. Thursday's show should include all of the above acts, plus psychic surgery, a blood-spilling magician and more. With drag queens and kerosene, thrills and spills, and fun for adults of all ages, the Bindlestiff Cirkus is playing with fire. Literally.

No results for query.
Search for more by FRANK MULLEN