Rearing its inebriated head one last time, the Atlanta band recalls its days in the ‘Redneck Underground’ 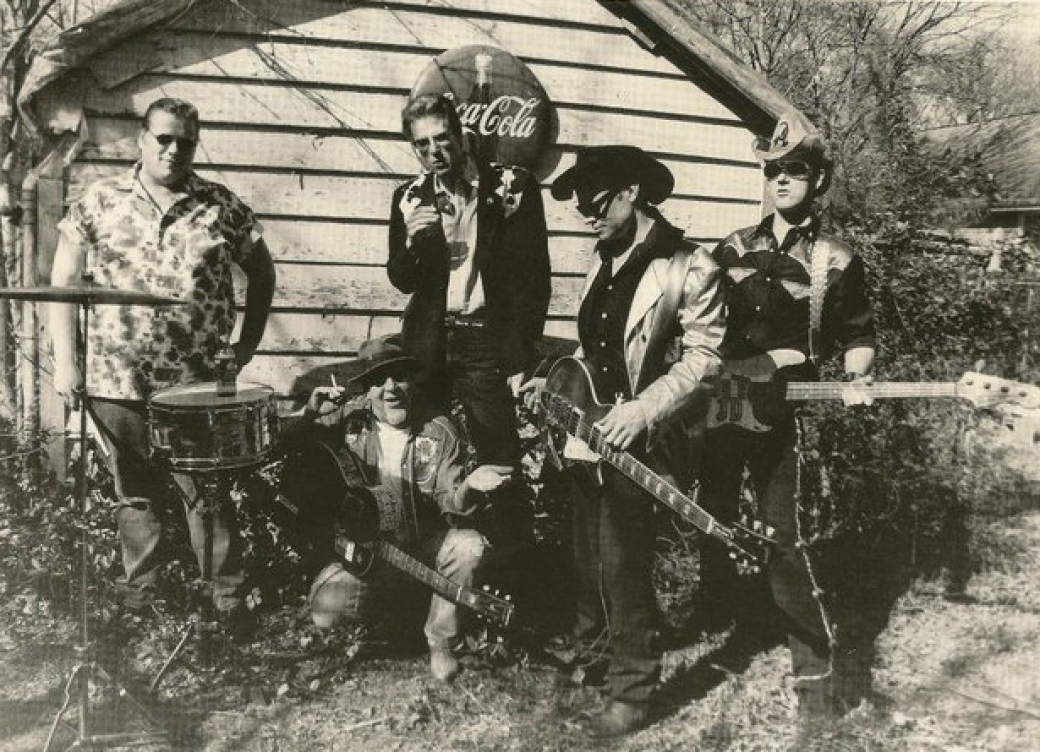 Photo credit: Courtesy Truckadelic
BACK IN THE DAY: Truckadelic in its first year.
By Tony Paris Thursday December 14, 2017 02:52 PM EST

Much has been said, much lamented, about Atlanta’s Redneck Underground, the music scene founded in the small confines of the now-gone Austin Ave. Buffet, credited to the vision of the late Gregory Dean Smalley, a man among men who founded Bubbapalooza and played in Redneck GReece Delux and other bands, and made outrageous by the late Deacon Lunchbox, the poet in an over-sized bra. Its musicians and followers reveled in a renaissance of Southern Culture and pride foregoing the racist overtones of the Confederacy for a love of music and the customs of their upbringing. Bands like Slim Chance and the Convicts, Redneck GReece Delux, the Vidalias, the Diggers, the Delta Angels, and Jennie B. and the Speedbillies were not whistlin’ “Dixie.”

Truckadelic was formed of this scene, melding cash crop country with elements of punk and the roots of rock ’n’ roll. They were late to the party, having formed after the Redneck Underground had moved to its new digs at the Star Bar, where Faylynn Owen booked RU locals to compliment visiting headliners, and where Smalley held the first Bubbapalooza, a piss-take on Lollapaloza, that featured bands of the Redneck Underground along with rockabilly, surf and instrumental bands in 1993.

From 1996 to 2001, Truckadelic established itself as a raucous, raging group run rampant on stages across the United States, and rising to headliners of Bubbapalooza. Described as a cross between Lynyrd Skynyrd and the Clash, they were like a petrol bomb thrown into a pigsty.

Though the band broke up in 2001, its members have decided it’s time to say goodbye, and are doing so with “Truckadelic's Last/Best-Ever New Years Eve-Eve Reunion Spectacular!,” Truckadelic’s first full-blown show in 15 years.

The line-up will include Billy Rat, guitar; Ted Weldon, vocals; John Dunn (Juan Durango), bass; Shawn Thacker, drums; and Evil Jim Wright, guitar. Other than Wright, who is along for the ride, This is the line-up that created the Truckadelic legacy. Original drummer Joe Hamm, who kept the beat for the band its first year, will will join in on a few songs for the night.

Called “Dieselbilly,” “Hick Rock,” and “Trailer Rock,” no matter the tag, Truckadelic could be the best band you ever saw, or, nothing more than a drunken, rabble rousing mess, depending on your — and the members’ — levels of intoxication. Either way, most fans left shows happy, if not drunk, knowing a good hangover was to come the next day.

Given that Truckadelic started the Star Bar’s “Toys For Tots Christmas Spectacular” in 1997 — and that Rat continued to host it after the band’s demise, I wondered if it wasn’t the season being the reason for the band to regroup. And and say goodbye.

Rat didn’t wax so nostalgic when asked, though he was somewhat philosophic.

“At our age, there aren’t many excuses to get up in front of a room full of people, get drunk, and make complete asses of ourselves without going to jail or gettin' our asses kicked, he said, noting, “And then there's the free beer and groupies! I, personally, have extra incentive as I will most likely be confined to a retirement facility in the near future where there is no beer … or groupies. Truckadelic as a way of life these days could not be sustained by mere mortals and old farts. Once we were a well-oiled machine rolling across the country wreaking havoc and leaving a trail of empty beer cans, hangovers, and melted faces in our wake. Damn good shabby fun! I think we're up to the task for one big night but then we'll be checking in for liver transplants the next day.”

The guitarist was his usual, low-key, humble self when remembering life with Truckadelic.

“When you went to a Truckadelic show, you were guaranteed to get your money's worth. More bang for your buck! There were nights when we were the most smokin' hot band on the planet and there were nights when it turned into a train wreck. Alcohol may or may not have played a part,” he laughed, “but both were entertainment at it's finest. Three-plus hours of music and mayhem. Sometimes there were bared asses. Sometimes there was vomit. Always everyone stumbled away into the wee hours grinning, surrounded by an aura of satisfaction. We hope for this show to be a some of both with an emphasis on the former.”

Drawing an audience that was just as ready to down a tall boy and a shot as the musicians onstage, club owners loved booking the band, if only because of the high bar receipts for the night, even if it meant having to work extra hard to clean up the mess afterwards.

“I don't know if our fan base was just a bunch of drunken fools or if we incited people to drink more than usual, but the bar sales were always way up for a Truckadelic show,” he admitted. “We did have a tendency to offer up a few toasts in the course of a show. ‘Let's all have a drink with Truckadelic!’”

As for having the reunion the night before the biggest night of drinking and debauchery of the year, Rat acknowledged that, 15 years later, their fans, just like the musicians themselves, have grown older and possibly a bit more, uh, mature, when it comes to such beer drinking and hell raising.

“We decided that we'd rather have the show on New Year's Eve-Eve than the next night because most of our fan base would probably want to lay low on New Year's Eve and avoid amateur night; stay home, cuddle up with your partner … or your critters, pop some popcorn, pop some tops, and watch the ball drop, maybe go to a party at a friend’s house and grill some wieners. Do I think having our show that night will impede anyone from celebrating New Year's Eve? Hell yeah! Absolutely! … Hell, we're even gonna count down to New Year's Eve and maybe have a complimentary paper cup of Champale for our revelers!”

Those revelers, those fans, those believers still identify with the Redneck Underground. Was it real — or was it like wrestling and the moon landing?

Rat took it a step further. “The Redneck Underground was much more real than the moon landing. It was a beautiful gathering of like-minded souls who believed that ‘country’ was a state of mind that had no musical boundaries and couldn't be defined by industry standards or Nashville bigwigs. It was a big ol' family of musicians and music lovers, artists, bikers, secretaries, construction workers, doctors, lawyers … everyday people who had a common love and respect for all things country and most things Southern, ‘One small step for Bubba, one giant leap for Bubbakind.’”

At this point, I felt it safe to ask, was Truckadelic really the "Kings of the Redneck Underground” as some claimed, and, with which, the band certainly didn’t argue?

“As honorable as that distinction is I'm not sure it was deserved. Slim Chance and the Convicts were around long before us and they continue to carry on the tradition today. Deacon Lunchbox was the first 300 lb. hillbilly with a beard that I ever saw reciting poetry in a dress. Opal Foxx was there at the beginning but I'm sure he would prefer the title of ‘Queen.’ Gregory Dean Smalley founded Bubbapalooza and gave us an annual outlet to celebrate our degenerate ways and wallow in the beauty of music that didn't conform to corporate country standards. Bubbapalooza is still celebrated at the Star Bar every Memorial Day Weekend and it's like a big boozy family reunion with familiar faces and some of the bands that were there at the beginning. The Redneck Underground is still very much alive but it has a job and kids and is a little more respectful to it's liver.”

Rat, in another life, worked in the music industry, record retail and otherwise. When he took to the stage, he discovered the other side. I wondered whether listening to music or creating live music onstage was his salvation.

“Live music makes the world go ‘round,” he told me without missing a beat. “I was blessed with growing up south of Macon, Georgia, which has always had a rich musical heritage. My first live show was Wayne Cochran at the Rama Theater in Warner Robins before he had the outrageous, magnificent bouffant. I saw Jerry Lee Lewis in 1957 on a flatbed trailer in a shopping center where he proceeded to close the show by setting his piano on fire. I saw Otis Redding and James Brown numerous times at the Macon City Auditorium in the mid ’60s. JB used to come out and do a half hour set on the organ before he ever sang a note. The Allman Brothers moved to Macon in the Spring of 1969 and played regular free shows in Central City Park before they became a national treasure. Other bands like Cowboy and Wet Willie followed and Southern Rock was born. I was blessed to be an insider and witness history being made in the studio and rehearsal rooms. As for making live music myself, there is nothing other than being a father that compares to the joy of being on that stage and giving yourself over to hittin' the note and giving it all for a joyous crowd of appreciative, smiling faces. I truly believe I was born to do this and I dearly miss doing it on a regular basis. I'm excited for the upcoming show and will relish every second and hopefully come out unscathed and unbroken with no vomit in my hair or cake in my pants. Real cake. Yes, that happened.”

Away from Truckadelic, Rat has created a niche market for himself as an artist, his paintings drawing inspiration from the gothic South and the music it produced. Each piece is a work 200 to 400 hours in the making. He’s not the only member of Truckadelic to express himself in many ways.

“All the members of Truckadelic are true renaissance men with a measure of Viking thrown in. They all still make music, most of them are in several bands as well as working "real" jobs. Ted Weldon works full time as well as playing in several bands and being “the Honorable Ted Weldon,” a much sought after MC and host with the most. Shawn "the Whacker" Thacker is a professional drummer in several bands, plays some guitar, and does renovations as well as help design and build recording studios. John Dunn, aka Juan Durango, lives on the coast in John's Island, S.C. and fishes, travels, makes stuff, fixes stuff, plays guitar in a band and eats a ton of raw oysters. Evil Jim Wright is a master guitar monster and seemingly plays in every band in Atlanta as well as publishing his own ‘how-to’ guitar books, printing T-shirts, and being a connoisseur of all things monster and metal. All these goobers are wonderfully talented renaissance men that I am proud to call my brothers!”

And they’ll probably all ring in 2018 with a hangover.

You can contact Tony Paris regarding upcoming gigs; noteworthy news, rumor, and innuendo; or, if you just want to say, “Hi,” at cl.highfreqs@gmail.com, since you already know he doesn’t read messages received on his Facebook account.