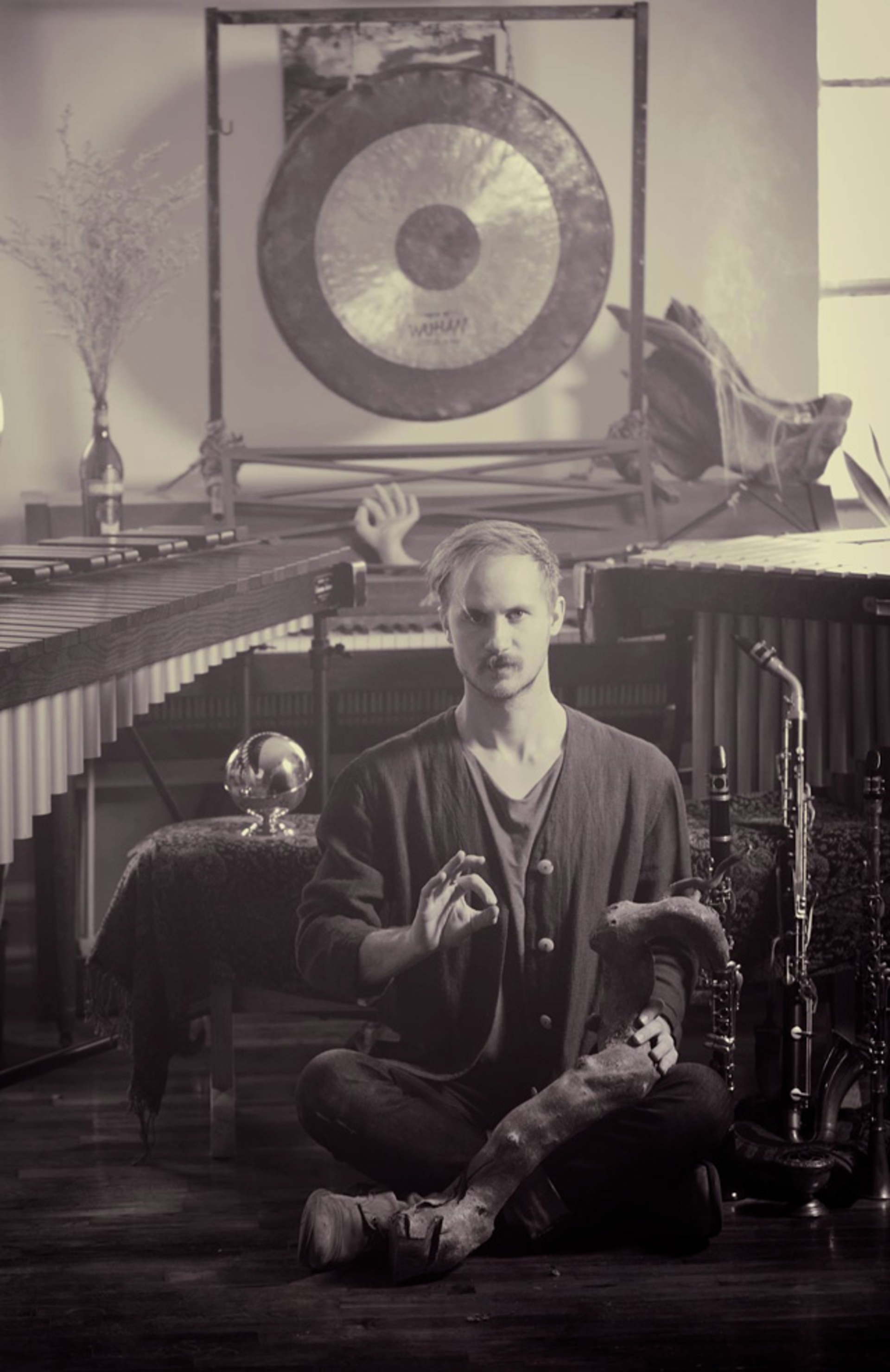 Faun and a Pan Flute bass player Danny Bailey last week offered a first look at a new piece of music he's composing to release via his solo moniker, Carey. "Parallel Music" is a 13-minute work-in-progress, and the first in a three-part movement.

Indeed, sometimes watching the process of how a piece of music comes together is just as important as taking in the finished product. Until now, the handful of recordings that Bailey has released as Carey have been much smaller in stature — small ideas that are recorded and cataloged to build upon later. And the instrumentation, generally speaking, has been too inconsistent to be recreated live. But despite "Parallel Music's" grandiose design, once it's completed, Bailey has every intention of taking this piece to the stage.

For the recording, Bailey plays all of the instruments: piano, upright bass, vibraphone, marimba, gong, clarinet, alto clarinet. But he intends to continue working on the piece while at the same time fleshing out "Parallel Music" movements 2 and 3. Once he has the initial structure for all three pieces complete, Bailey will then write string parts — cello, violin, viola, etc.

The live band he's putting together to play the pieces will be assembled later. "Over the last six months these have taken form as a potential orchestral composition," Bailey says. "Chris Childs' Orchestra was definitely an inspiration. It proved to me that it's not impossible to put together something like this. Gage Gilmore's 'Five in Three Parts' was a huge inspiration, too. It is, in a way, his own 'Parallel Music.' We were each developing these themes and patterns around the same time."

On the morning of Feb. 20, Mastodon revealed via Facebook that the group has purchased a building that will soon be used to house rehearsal and practice spaces for local artists and musicians. A practice space shortage in the city has become something of a crisis after both Thunderbox and Avatar Studios closed down in 2015. The new Mastodon-owned space is taking over the former home of Othello Event Hall at 1170 Sylvan Road S.W. Guitarist Bill Kelliher is overseeing the project, which will take its name from the Mastodon song "Ember City." Read a full Q&A with Kelliher here. In the meantime, stay tuned for more information as it becomes available.

On Feb. 22, during a live performance at Greenbriar Mall, rapper T.I. announced that his 10th studio album, The Dime Trap, is on the way and will be released via his new partnership with Jay Z's Roc Nation. He also informed the crowd that he is the newest part-owner of the recently unveiled music streaming service Tidal.

On Feb. 23, "Down Down" from the Coathangers' forthcoming album, Nosebleed Weekend (out April 15 via Suicide Squeeze), premiered on NPR's "All Songs Considered." The Coathangers play an album release party at the Star Bar on Fri., April 15, with Paint Fumes, Bad Spell, Paralyzer.

Semi-local folk-pop favorite 100 Watt Horse has solidified around a current lineup that features founding member singer and guitarist George Pettis performing alongside singer and live bass player Anna Jeter. On March 25, the group will release its latest cassette/download EP, It May Very Well Do, via Seagreen Records. The songs were recorded in 2015 in Atlanta, Tallahassee, Florida, and Olympia, Washington, and build upon a pastiche of samples and field recordings captured while the group toured across the country. Pettis and co-producer/multi-instrumentalist Graham Tavel sculpted the EP so each song blends into a single 15-minute piece. The idea is to keep the songs in their original order as they were meant to be heard, and as they would be heard on a vinyl LP.

While most artists are lucky to find success in one musical lane, New Jersey-born, Atlanta-based singer Regina Belle has been scoring hits in multiple genres since making her 1987 debut. Just scan some of the big tunes she's dropped over the course of her career — "Baby Come to Me" (soul), the Grammy-winning "A Whole New World" (pop), "If I Ruled the World" (jazz), and "Love Forever Shines" (gospel) — and it's easy to see the breadth of her diverse catalog. And, as of late January, her genre-jumping continues with The Day Life Began (Shanachie), her first R&B album in 15 years. Carlton Hargro recently spoke with Belle, who opened up about the making of her latest project. About the album, Belle says: "I wanted to talk about some of the stuff that's going on in the world, but I wanted to do it through familiar music. Basically, the music I am known for, I wanted to come back and reacquaint audiences and maybe some folks who don't know who I am or my sound."

Last, but not least, Sea Ghost has a new video out for the Courtney Barnett-esque "Dog 69" from last year's album, SG. The group's upcoming EP, Boy Music, will be released in the coming months. Stay tuned for more.

With additional reporting by Maurice Garland and Carlton Hargro.