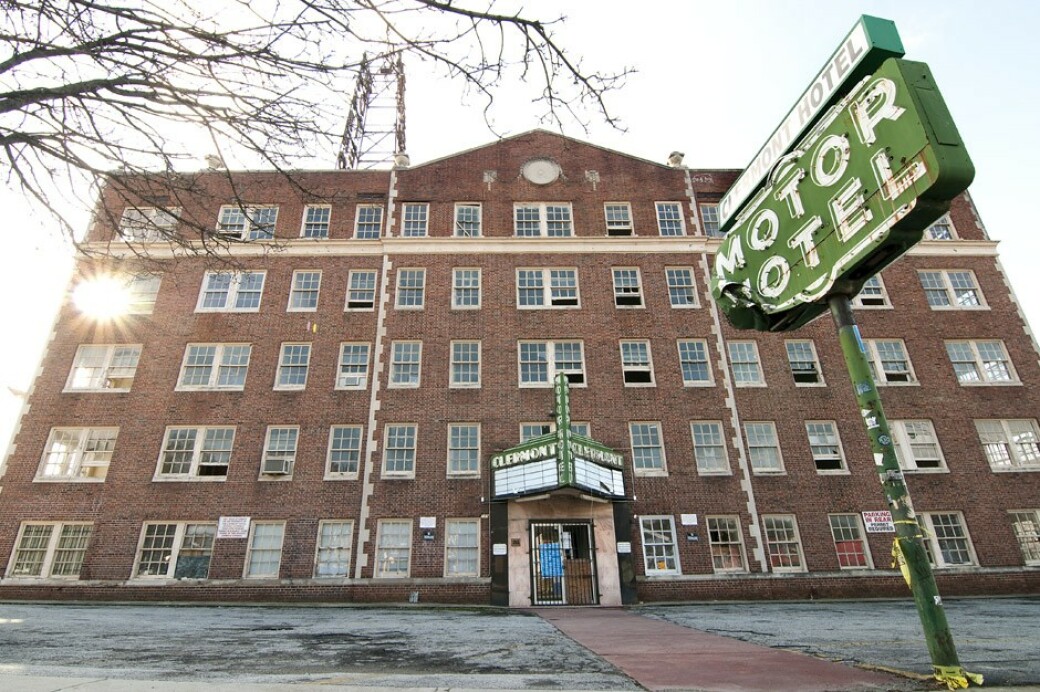 For nearly nine decades, the Clermont Hotel has accommodated everyone from white-collar workers to prostitutes under a single roof at 789 Ponce de Leon Ave. "You can tell that this neighborhood had once been elegant," former hotel resident and exotic dancer Atlanta says. "Over the years, it degenerated into a seediness that was not forgetful of all the old manners and customs." (Read more about the Clermont's history and future redevelopment here) 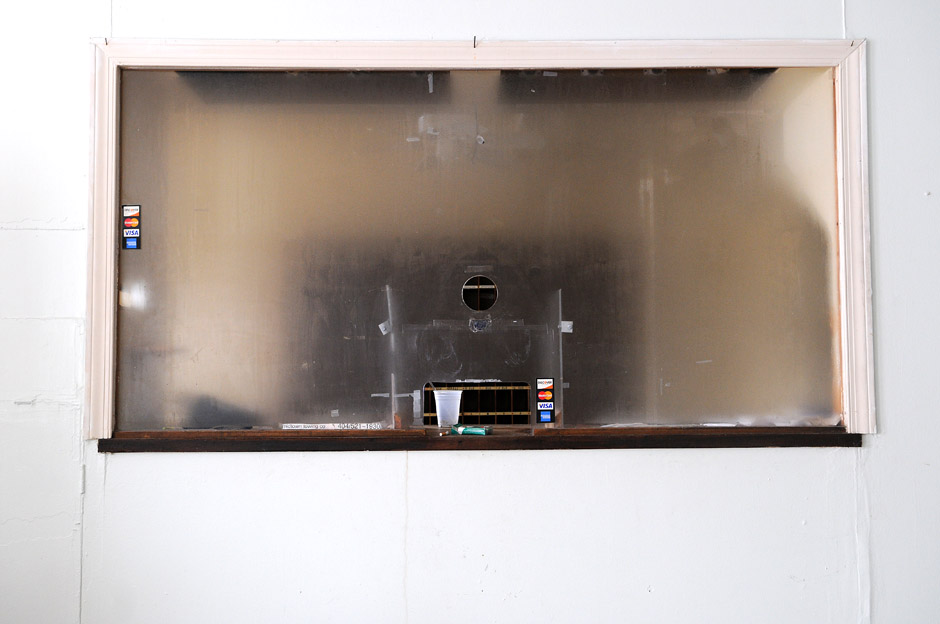 The men and women who checked into the hotel over the years remember their stays differently. Sharry McCormick, a former fourth-floor tenant, cherished her residence. "It was like being in the country at your grandma's house because it was so cozy," she says. "It felt like being home." Atlanta-based writer and Emory University professor Randy Osborne, a former Clermont Hotel guest, has less romantic memories. "Roaches scurried in and out," he says. "There was a smell. Muffled screeches and moans came from the other rooms, people either having orgasms or being murdered." 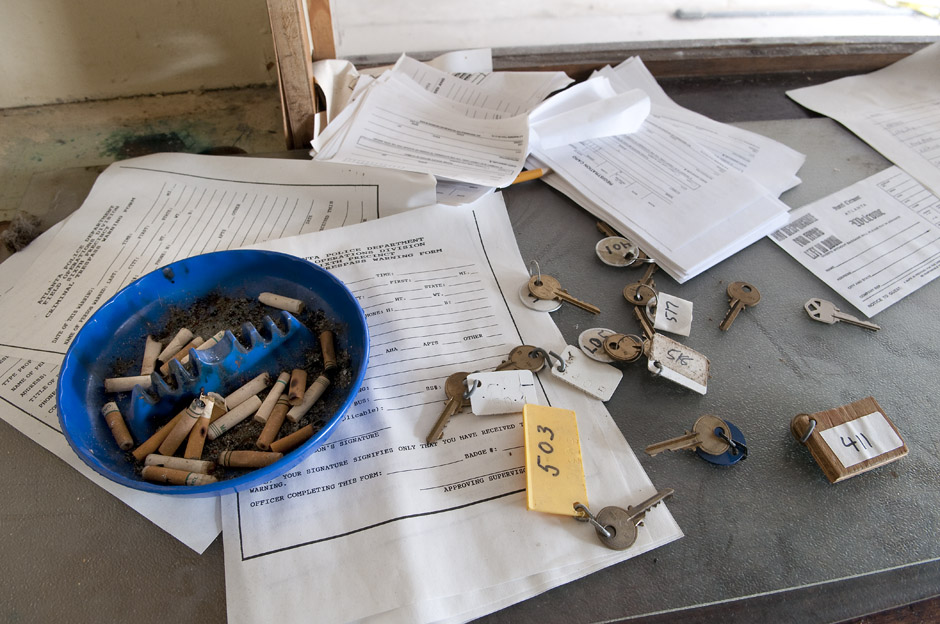 Behind the front desk, hotel clerks registered guests, discouraged loiterers, and doled out room assignments. "The lobby was full of drunks, mumblers, and assorted derelicts," Osborne says. "A sour matron with knotty, arthritic fingers slid my key across the counter without a word. Third floor." 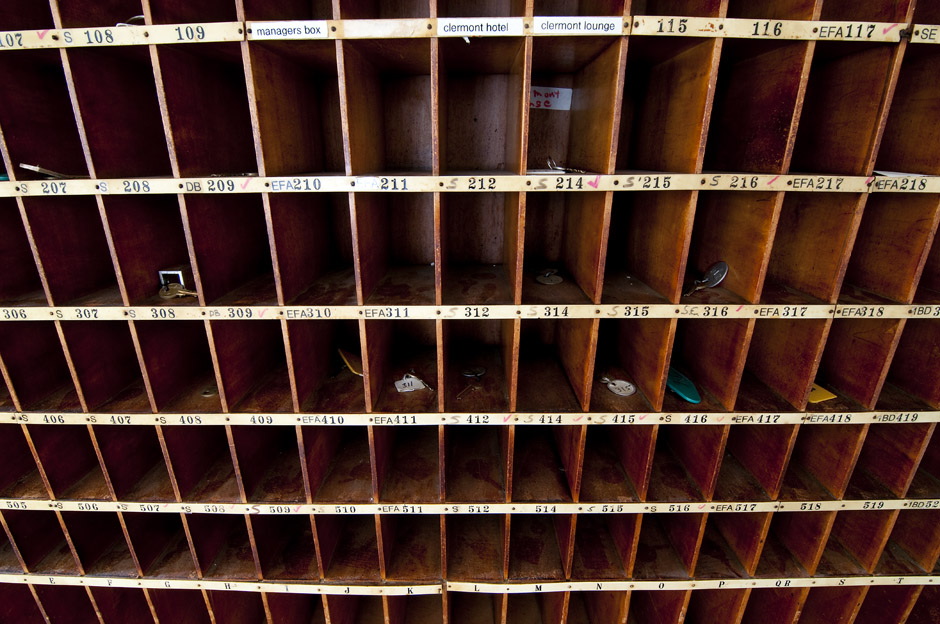 Each hotel room had a designated box for delivered mail and other notifications. "The front desk was amazing," Henry says. "They had numbered mailboxes, keys in boxes, and kerosene lamps. They had various stuff crammed into cubbyholes. It felt like a funky little time capsule." A handful of keys with hangtags still rest inside the wooden boxes today. 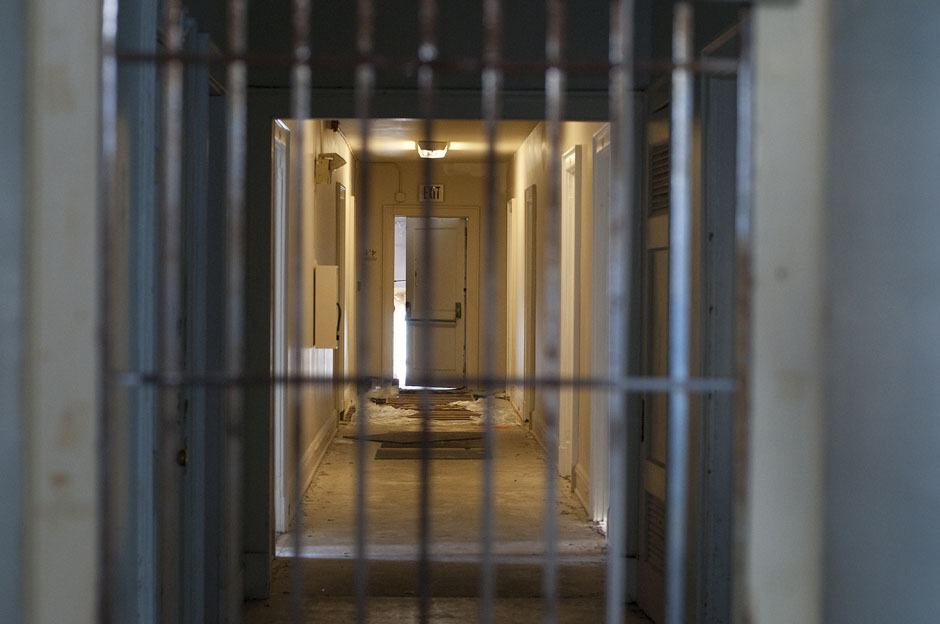 The first-floor hallway appears to be in disarray from behind the registration desk. 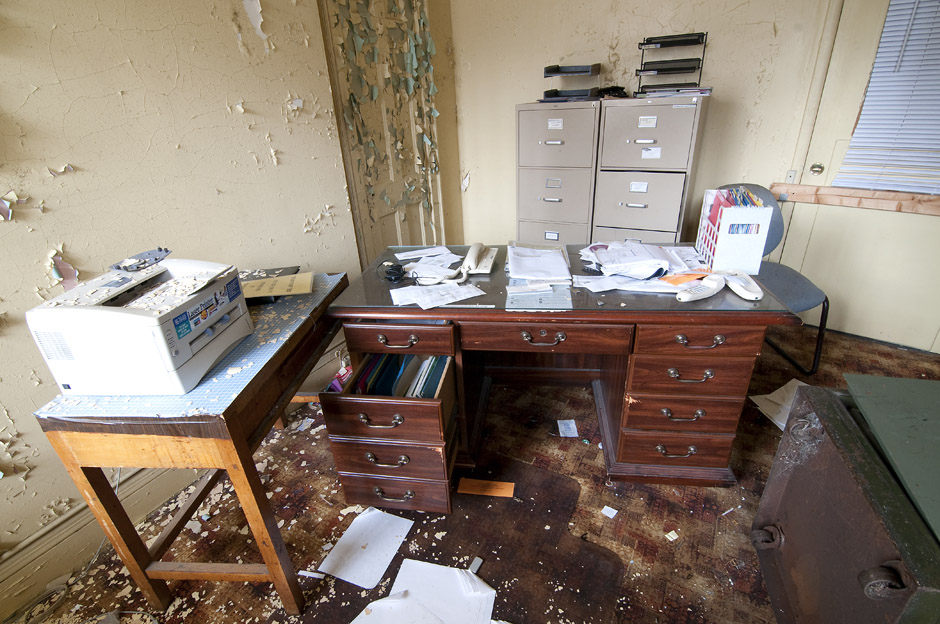 Parts of the building remain largely untouched since Fulton County health inspectors ordered the seven-story building to close in late 2009. Georgia Department of Revenue documents and employment records still sit inside drawers in the back office. "It looks like someone just one day walked out," G+G Architects co-principal Lee Ann Gamble says. "The desk was there. The things on the desk were there. It's like they were leaving for an hour." 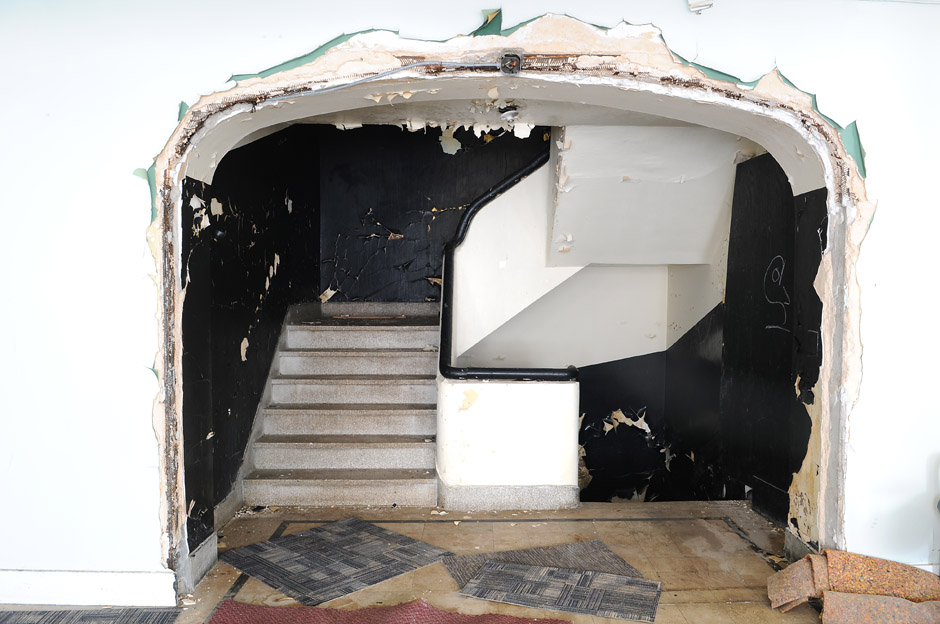 The Art Deco-style main staircase is expected to remain untouched aside from some new lighting and a fresh paint job. McCormick remembers taking the stairs to her fourth-floor apartment whenever the elevator would malfunction. "It was exactly 82 steps from the lobby to our apartment," she says. 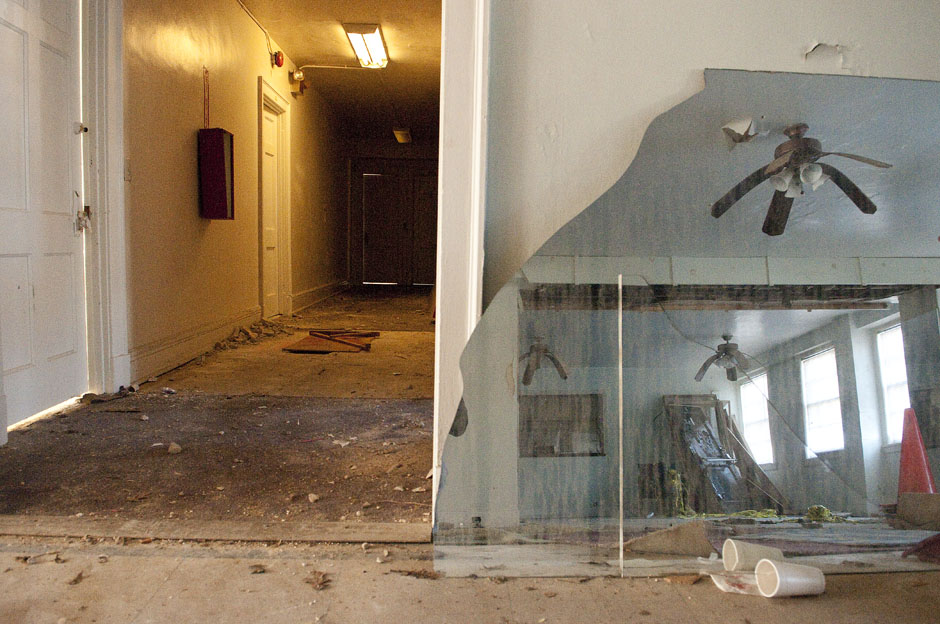 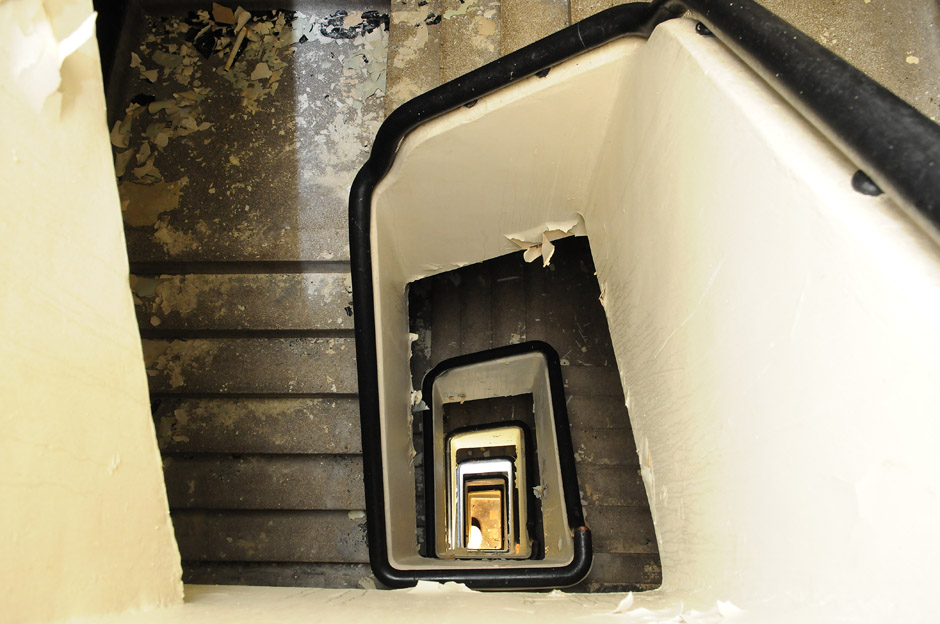 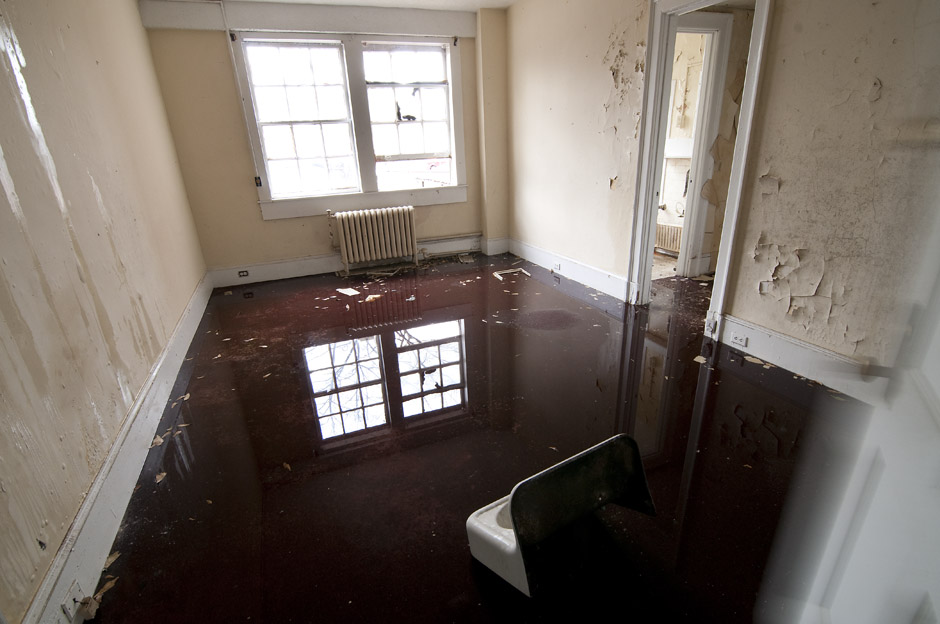 Room 21 remains underwater after a pipe burst on the fourth floor and flooded several rooms below. Estimated costs of the Clermont Hotel's repairs range from $10-$30 million. 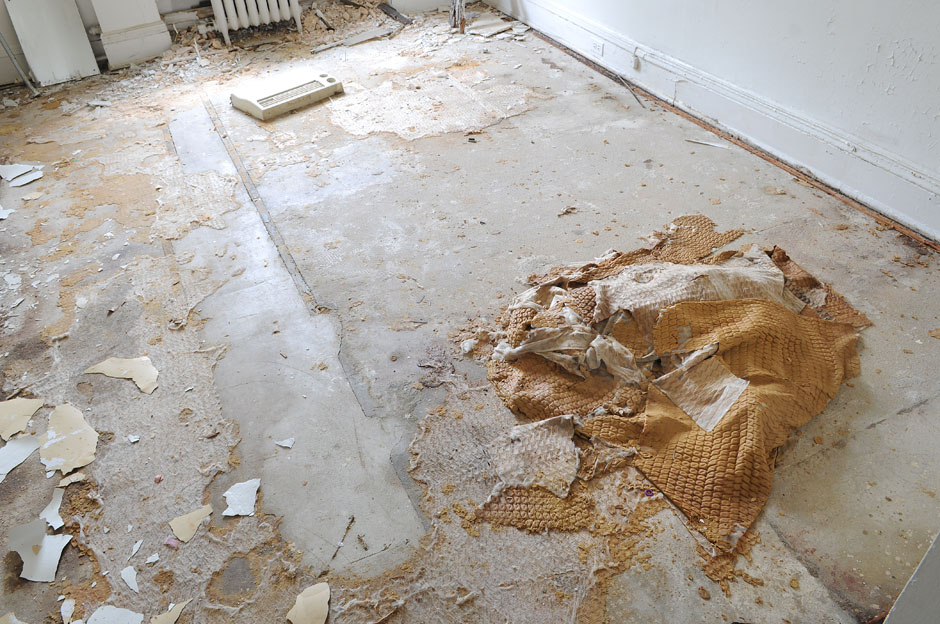 Months before accidentally overdosing in 1993, shit-hurling New York City punk rocker GG Allin rented room 216 for an extended stay. According to Blondie, he was dating one of the Clermont Lounge's workers when he recorded one of his final songs, "Hotel Clermont." "He was a sweetheart," she says. "He stayed in the hotel and used to sleep all day." Years later, his room became worthy of pilgrimage for younger hipsters. "Can we stay in the room where GG Allin killed himself?" Atlanta remembers overhearing when she lived at the hotel. "I don't think he died there. But they wanted that room!" 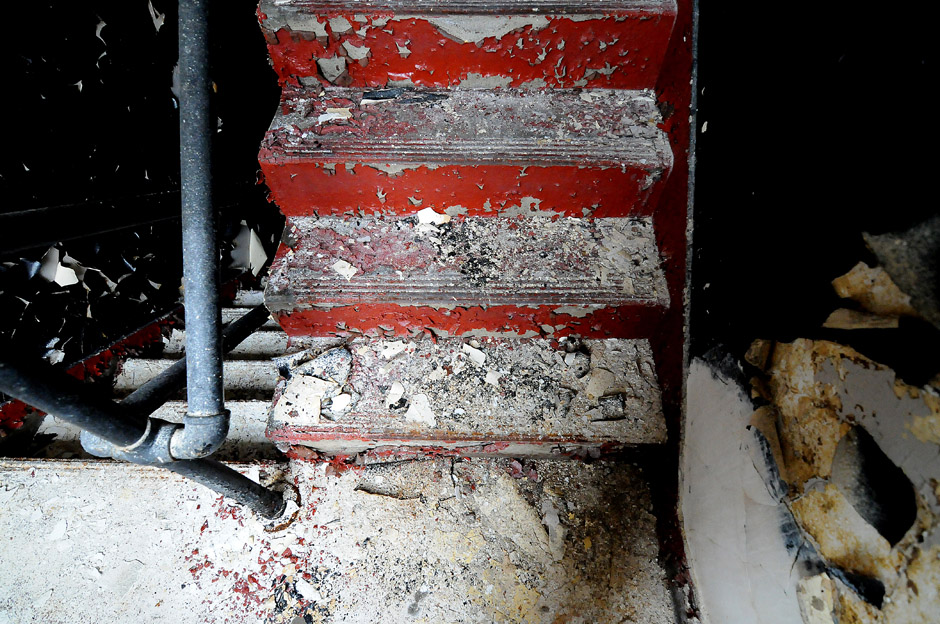 Former hotel guests recall the building's back staircase, which led to the building's back exit, being particularly noisy. The manually operated elevators occasionally broke down, forcing people to use one of the two staircases. Or visitors turned to the stairs while trying to be discreet with their activities. "I would meet people in the Lounge, hook up with them in the hotel, and then sneak out the side door 'cause you would not want anybody to see you," Blondie says. 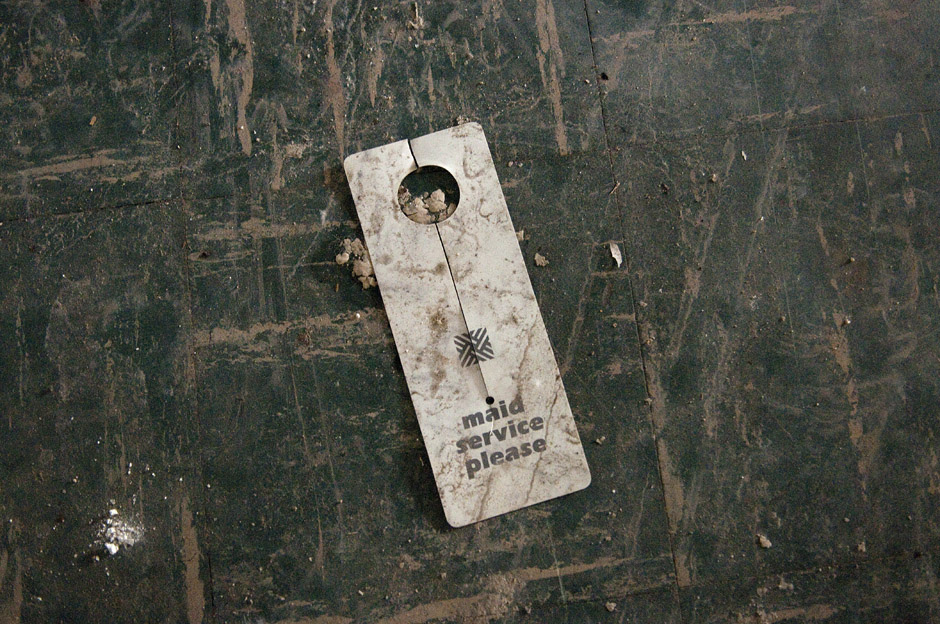 Atlanta entertainer and drag queen Diamond Lil, who stayed at the hotel nearly three decades ago, remembers a "shopworn room" with clean sheets and towels. "The hotel was a little bit dreary," she says. "They had pretty nice accommodations, but not first class exactly." On the second floor's hallway, a discarded maid service sign offers a reminder that the hotel was cleaned once in a while. 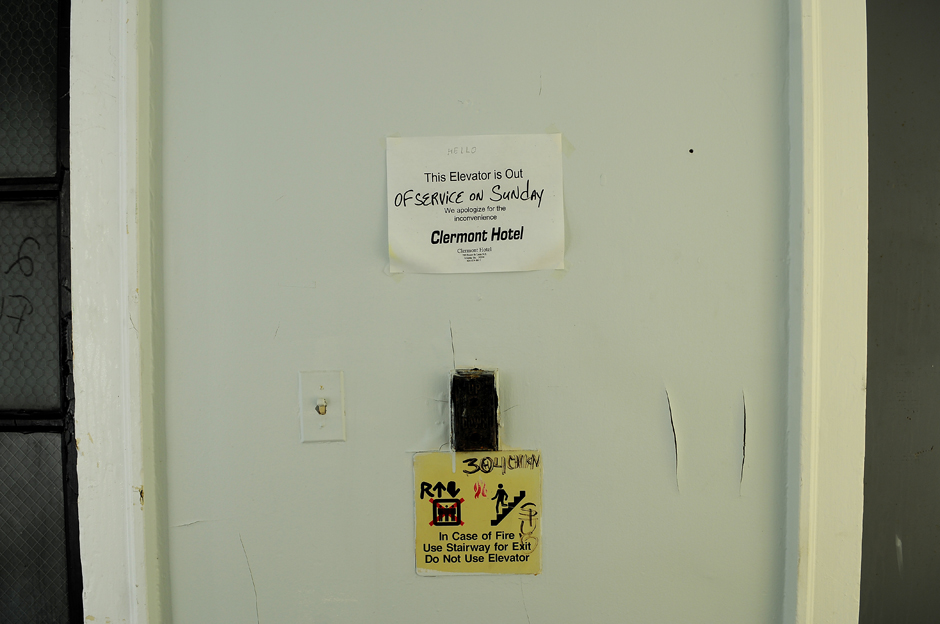 Next to the hotel's original manually operated elevators, a sign reads: "The elevator is out of service on Sunday. We apologize for the inconvenience." 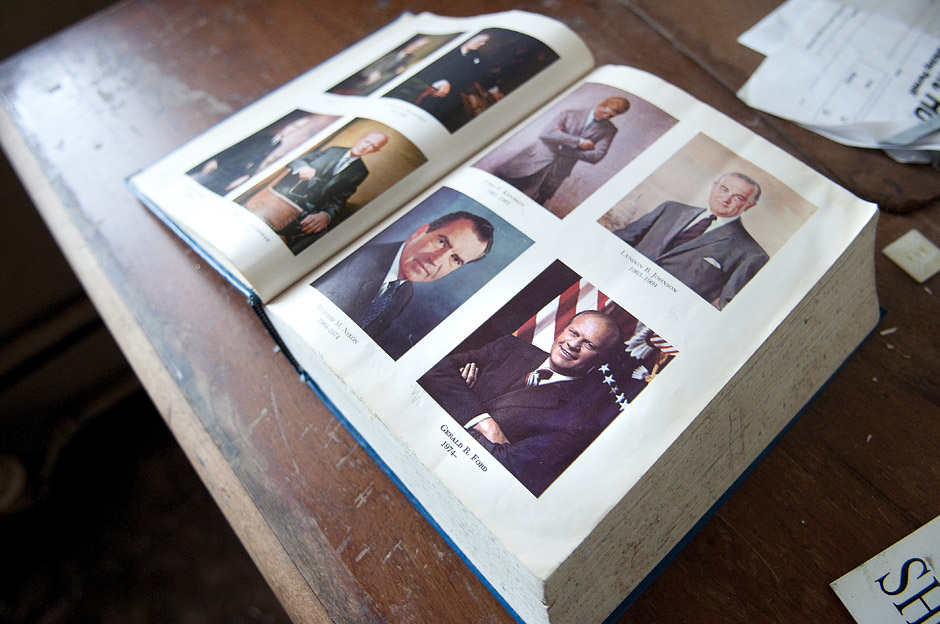 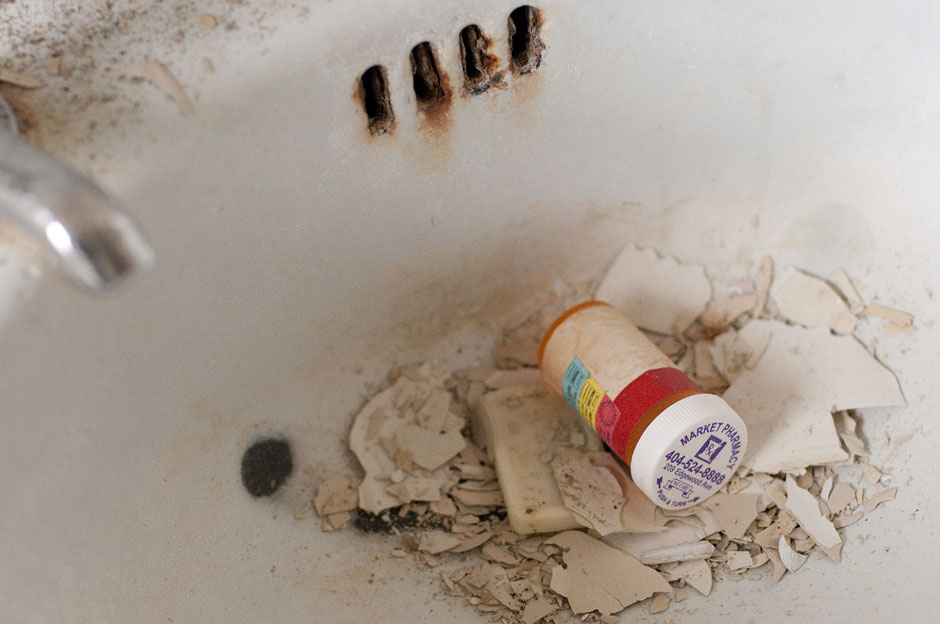 An orange prescription vial and a bar of soap remain inside a sink in one of the room's porcelain-tiled bathrooms. 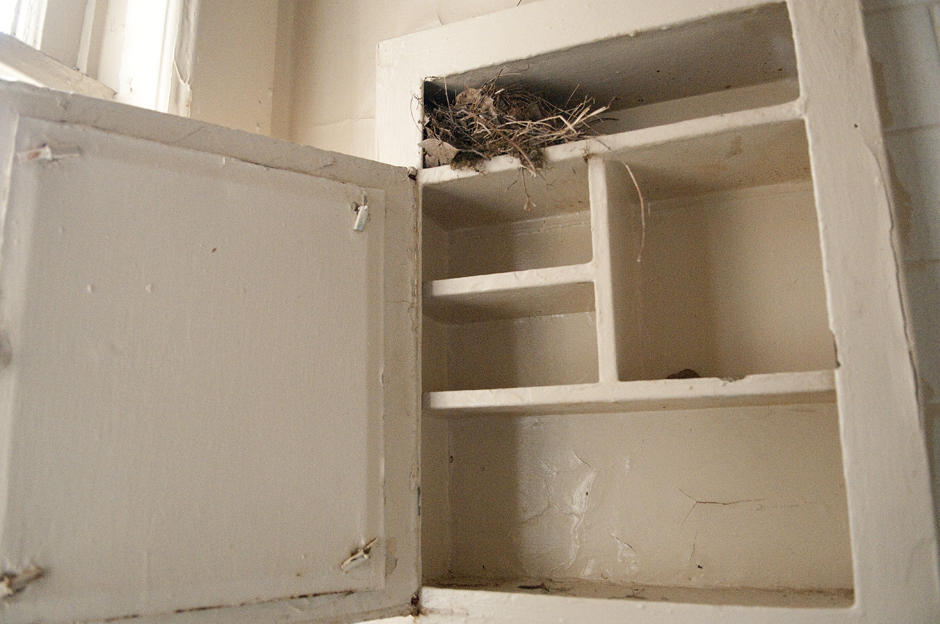 A bird built a nest inside the top cabinet in room 22's bathroom. 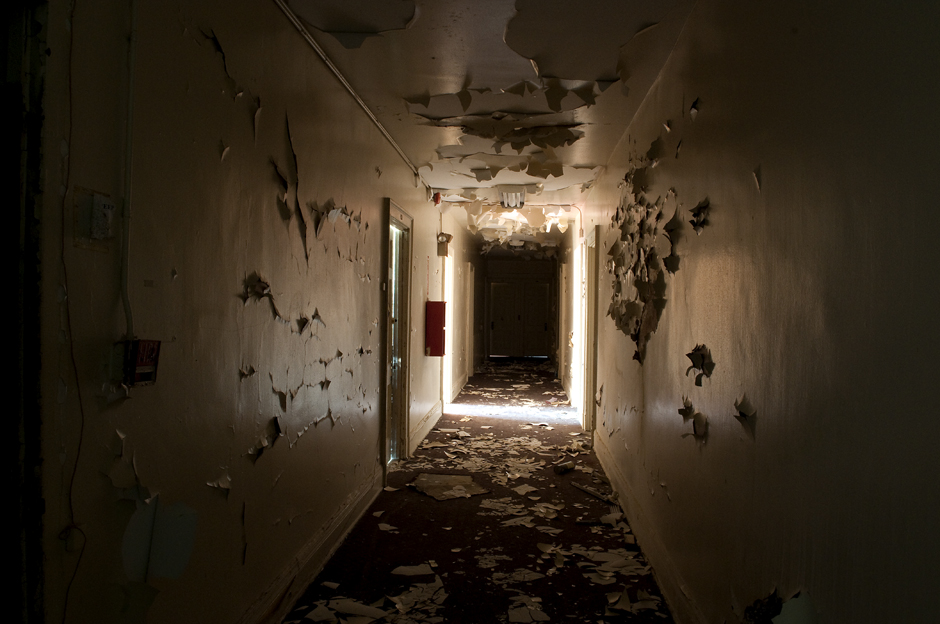 On sunny days, the Clermont Hotel's hallways feel simultaneously creepy and eerie. The peeling paint on the walls gives way to the light that shines out of rooms and under doors. 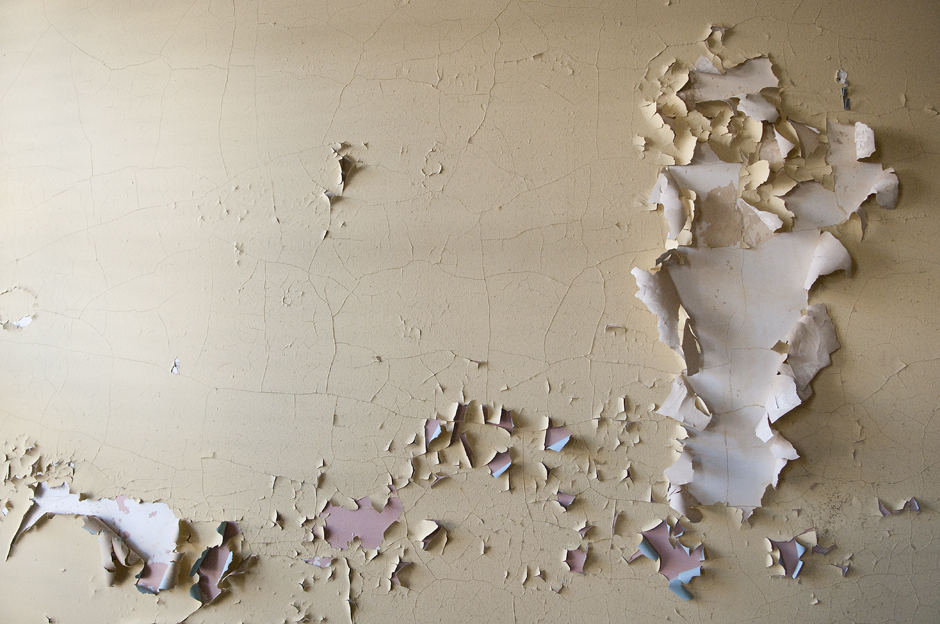 Large strips of paint peel from most of the hotel's interior in different shapes and patterns. 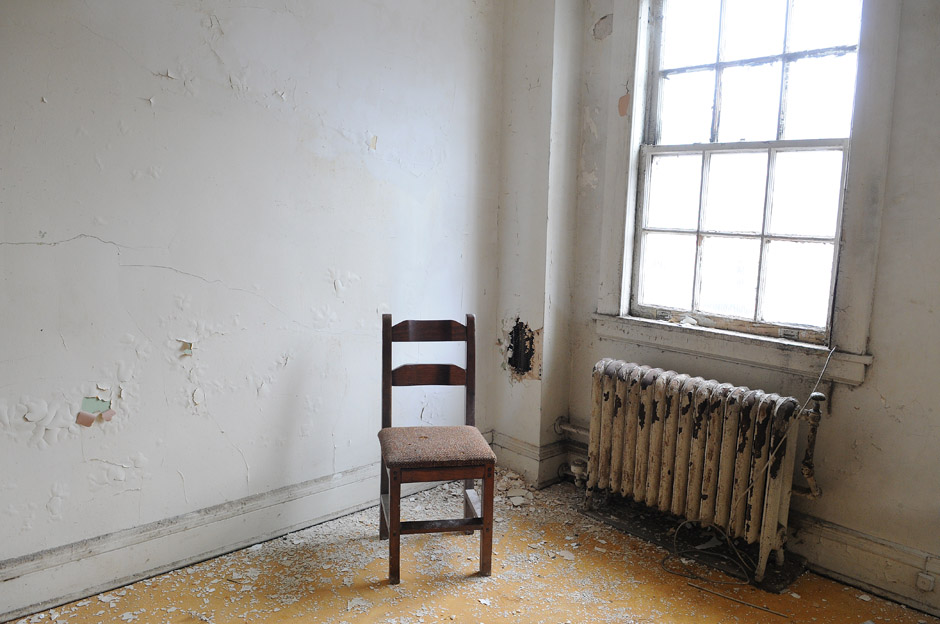 A lone chair sits in the corner of a vacant room inside the Clermont Hotel. 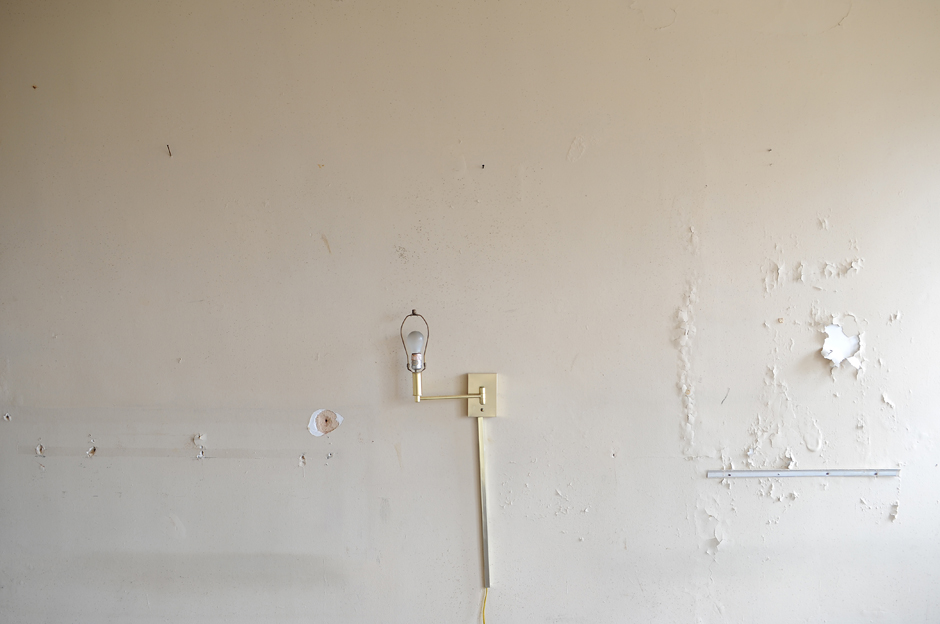 Rumors swirl about death and murder within the hotel. One former resident claims that a woman was shot and killed inside room 416, where this light bulb later burned out. 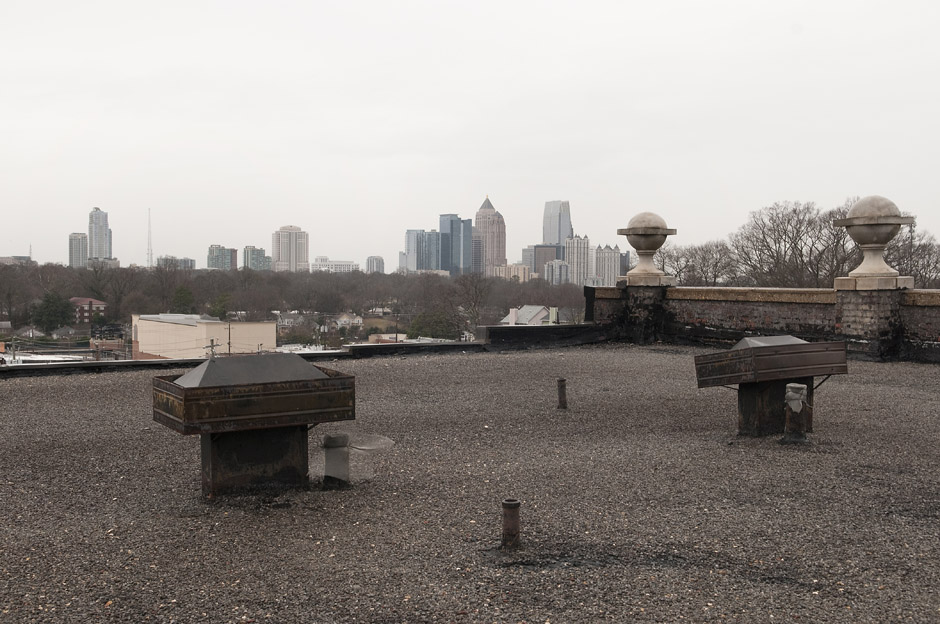 The hotel's new owners plan to build a rooftop bar atop the building and could provide patrons with a stunning view of the Atlanta skyline. 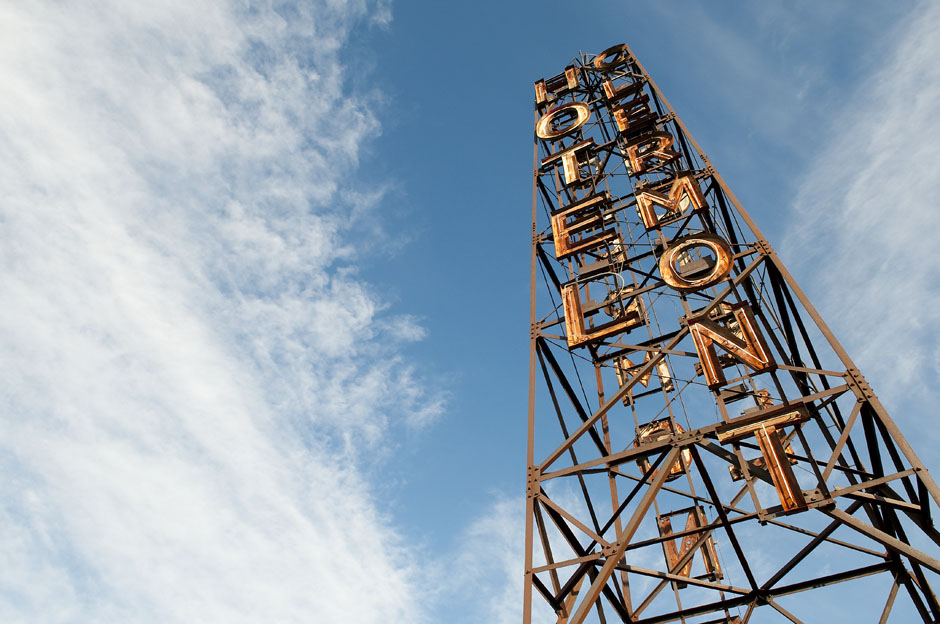 The Clermont Hotel's rusting tower will soon be restored and outfitted with neon lights that will beam down upon Ponce de Leon Avenue. 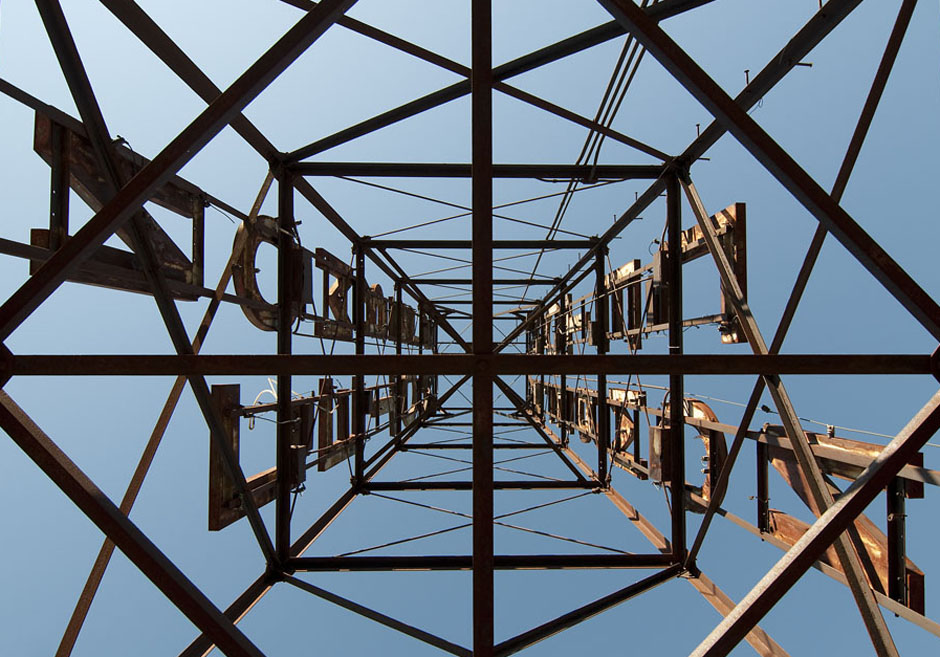 The iconic metal tower, which was added in the 1940s to promote the hotel's opening, rests atop the elevator shafts.