While dining with my friend Michael Dellaporta at Staplehouse one night, he told me how happy he was that the restaurant had finally opened. Michaels' wife, Kristen Mohn Dellaporta, had many plans to help the Giving Kitchen, the charitable foundation that benefits from 100 percent of Staplehouse's profits. As CFO of Abbadabba's, Kristen wanted to give restaurant professionals discounts on quality, no-slip work shoes. But cancer interrupted all of her plans. Kristen passed away in December 2015.

The Giving Kitchen was born out of a tragedy related to cancer when Staplehouse's original chef, Ryan Hidinger, was diagnosed and passed away in January 2014 at 36. Hidinger's supporters, close friends, and family founded the nonprofit in the late chef's honor to help those still struggling with hardship. In September 2015, Hidinger's wife, Jen, his sister, Kara, and brother-in-law Ryan Smith — with the help of countless community donations — opened Staplehouse in Old Fourth Ward.

But this story isn't about the Giving Kitchen's origins or the organization's life-changing work. By now most of us are familiar with that tale. This review is about the restaurant and its head chef, Ryan Smith, who is cooking the best food of his career.

Smith, who has worked under great chefs such as Restaurant Eugene's Linton Hopkins and Hugh Acheson of Empire State South, was recognized early on for his skill. He left his post at Empire State South in fall 2013 to focus on launching Staplehouse with copartners, Jen, Business Manager and TGK Spokesperson, and Kara, the restaurant's general manager. Prior to this venture, Smith's career had always consisted of executing, albeit collaboratively, someone else's vision. This is the first time we're getting to experience Smith's blend of regional, New American-modernist cuisine unfiltered. 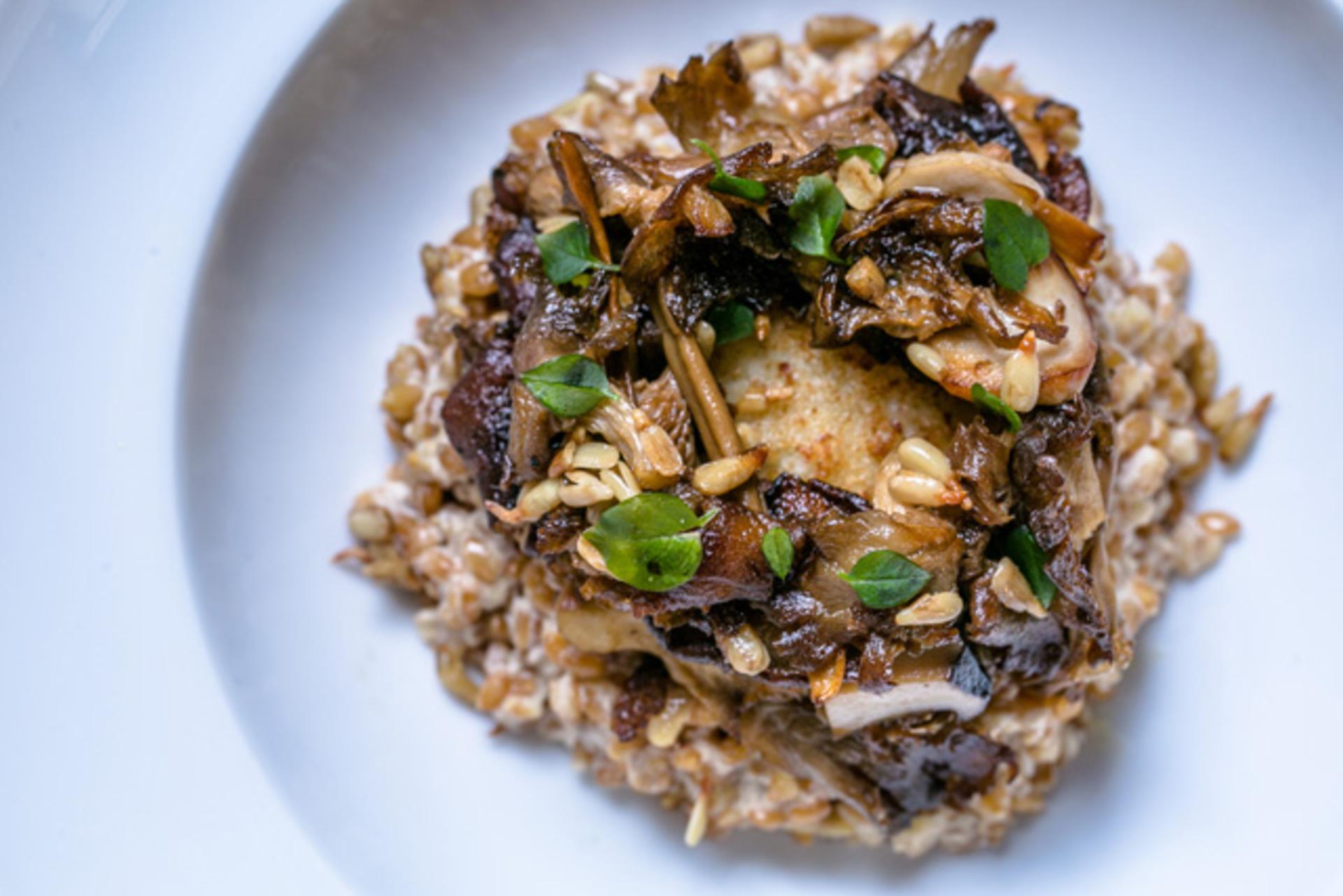 Located in a charming, two-story building on Edgewood Avenue, Staplehouse manages to feel both casual and refined. Exposed brick walls give the space a contemporary urban loft vibe. Laid out in a plane-like configuration, banquette seating and wood tables line the length of the dining room. One end is home to a modest bar and large windows that overlook Edgewood. The back of the restaurant — where the main entrance, host's stand, and patio are all located — is where Smith and his crew can be found cooking in the bright open kitchen.

Staplehouse uses the Tock online ticketing system, where, if you choose the chef's five-course tasting menu for $85, you pay for the meal plus tax and gratuity in advance. The tasting menu is a lengthy and filling experience. In fact, on one occasion I was so full from a freshly baked intermezzo of potato bread and whipped olive oil I barely touched the duck breast course that followed.

Although the tasting menu has variations and dishes that aren't available otherwise, ordering a la carte is a more cost-effective way for a group to taste most of the menu. Theoretically, if a table of three chose to order every a la carte dish that night (items ranged from $7 for the puffs to $49 for a ribeye during one of my visits) the total would come to $210. That is noticeably less than the $255 three tasting menus would cost. And that's before drinks.

Whether you splurge for the tasting or choose to order a la carte, Staplehouse is not the best fit for picky eaters or diners who habitually ask for substitutions. I imagine Staplehouse's intensely friendly — although sometimes scattered — staff would accommodate any diner request. But when you choose to come here, it's to experience Smith's unique perspective. Significantly altering dishes he's mindfully composed defeats the purpose of eating at a restaurant like Staplehouse in the first place.

Components such as a black-as-night pool of pleasantly bitter charred cabbage sauce or whipped beef fat that brought to mind a funky aged blue cheese showcase Smith's affinity for intense and exaggerated flavors. Another time, a tamer, sweeter version of the beef fat was dolloped onto a silky King crab leg terrine. The chef finished the dish with a bright green celery oil vinaigrette splattered dramatically across the plate.


During each of my visits, I was served wedge of "charred" cabbage. One night, the earthy vegetable was served in a smoky n'duja sausage broth. My favorite version found the sweet and tender vegetable blanketed in an ethereal layer of sake bushi (shaved cured salmon). The sublime dish exemplifies Smith's ability to keep things simple and let worthy ingredients shine without excessive manipulation.

Smith also reduces his reliance on traditional fats like butter. In the farro piccolo with crispy roasted mushrooms, for example, it is buttery sunflower seeds and a runny egg yolk that give the dish its rich and creamy heft. One of my favorite dishes, a towering pile of sweet baby turnips — some the size of peanut M&Ms — and big chunks of pepperoni showed how incredible the chef's sauce-making skills are. The vibrant green sauce made from the turnip tops was sweetened by the addition of slow-cooked black garlic. The sweet notes of caramelized garlic are a perfect bright complement to the spicy and salty pepperoni and juicy turnips.

While the precise presentation is in line with Smith's visual and artistic plating style, the desserts lacked the thoughtfulness found on the rest of the menu. One night, for example, not only was a pistachio financier too dry, the tiny dill meringues it came with clashed with the citrusy cara cara sorbet. I would have preferred a wedge of cheese and, perhaps, this would be a good place for the warm potato bread that came before the meat course.

If you choose a tasting menu, wine pairings ($40) selected by beverage director and manager Stephen James bring out the best in Smith's cooking. If you prefer to order off the menu, James' wine list includes affordable and approachable wines such as Priorat by the glass or my favorite crisp springtime wine, the Bandol Rosé. The cocktail menu, which James also oversees, is exceptional. In fact, I have found myself pairing cocktails with my meal more than wine because of their vibrant, experimental nature. Anything the bar makes with tequila is both dangerously fun and refined. The El Diablo is a fruity concoction of tequila, creme de cassis, ginger beer, and lemon. The Penicillin, a powerful combination of scotch, honey, ginger, and lemon, was like a remedy to the bitter cold outside.

As I drank hot strong sips of that old-timey boozey cure-all, I felt at home and comforted in this family's restaurant. I watched as Kara, with her baby girl expertly positioned on her hip, seat guests before handing her daughter off to a relative, who was presumably taking her home for bed. The baby's exit was not complete without kisses from Dad in the kitchen and snuggles from Aunt Jen at the hostess stand. Between this family’s hospitality and Smith’s refreshing food, Staplehouse humbly redefines what a contemporary mom-and-pop eatery can be. (4 out of 5 stars)