Lose yourself in the land of biscuits

There's a mysterious stretch of land outside the Perimeter, where biscuit shops rule the breakfast hours. I like to call it the Marietta-Kennesaw Biscuit Triangle. It may not be as famous as the Bermuda Triangle, but just as the Bermuda Triangle pulls in wayward travelers, the Marietta-Kennesaw Biscuit Triangle pulls in biscuit-seekers from miles away. (If you're coming from Atlanta, that's around 25-30 miles depending on where you start.)

The borders of the Triangle are marked by three country-cookin' biscuit shops that could all pass for cute rural houses. The Red Eyed Mule on busy Church Street in Marietta marks the southeastern tip. At the western boundary, Stilesboro Biscuits presides over a suburban stretch of road that runs past Kennesaw Mountain National Battlefield Park. And the northern edge of the Triangle is marked by the Ugly Biscuit on Main Street near the heart of old Kennesaw. There is a fourth and final (known) destination, also an adorable little house, called Mountain Biscuits, which sits directly on the path between Red Eyed Mule and Stilesboro Biscuits. It's a welcome pit stop for those travelers who might encounter biscuit withdrawal on the 10-minute drive between the other two.

For the intrepid biscuit connoisseur, the morning trek up I-75 is worth the drive. Each of these establishments offers the type of traditional experience that's just not available in town.


1. Stilesboro Biscuits: Perched at the most remote corner of the Biscuit Triangle, Stilesboro Biscuits is the most destination-worthy thanks to its staff's overwhelming friendliness in addition to the biscuits' fluffy, warm embrace. Owner Lynn Herndon, who sets the welcoming mood, told me that when she first came upon the little Stilesboro Road shack, she knew she had found the biscuit shop of her dreams. The building dates back to 1897, when it opened as a remote general store. First, order at the counter and then take a seat among communal tables. The walls are covered in photos of customers from decades past. The biscuits achieve a lovely loftiness, not quite flaky, but certainly not dense. Tender torn biscuit chunks swimming in sausage gravy, which is thick, creamy, and flecked with just enough black pepper, is especially noteworthy. As for other options, Herndon's cardinal rule is "you should know what's in your biscuit by the first glance — everything should be hanging off the edges." Bonus: Folks swear by Herndon's cinnamon rolls, too. Hours: Wed.-Sat., 7-11:30 a.m. 3590 Stilesboro Road N.W., Kennesaw.


2. The Ugly Biscuit: What sets the Ugly Biscuit apart from its counterparts is the use of some exceptional, often local, ingredients. The intensely smoky bacon and country ham come from famed Benton's in southeast Tennessee. The stone-ground grits arrive from a farmer friend in Cumming. The sorghum syrup is squeezed at Hughes Sorghum Mill in North Georgia (a major plus since most biscuit places have given up on sorghum). Managing partner David Gillespie says the name comes from the manner in which they make the namesake biscuits — a modified drop method, without rolling or cutting — that results in a somewhat misshapen mess. "No two biscuits look the same," Gillespie says. Opened in 2014, the Ugly Biscuit is the newest and most restaurant-y of the Triangle biscuit shops. It offers full, sit-down service along with several savory biscuits like with house-smoked brisket or pulled pork at lunchtime. Hours: Tues.-Fri., 6 a.m.-2 p.m.; Sat., 7 a.m.-2 p.m.; Sun., 9 a.m.-2 p.m. 2756 S. Main St., Kennesaw. 678-202-4836. www.theuglybiscuit.com. 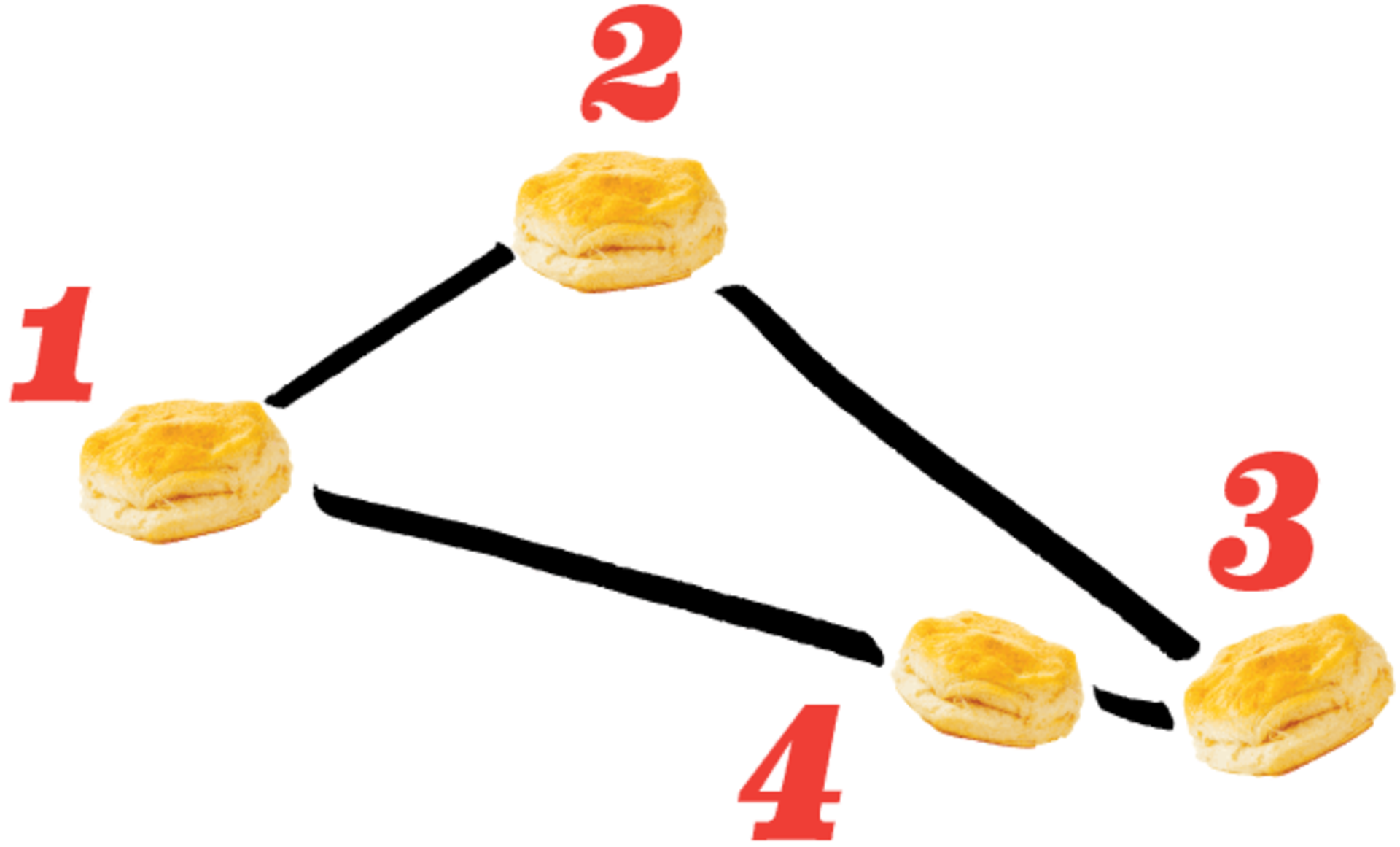 3. The Red Eyed Mule: Alton Brown made the Red Eyed Mule famous when he extolled the restaurant's Sloppy Slaw Burger on the Food Network, but biscuits remain the primary draw here each morning. It's counter service, but the place has a bit more of a diner feel than its biscuit brethren due to an open kitchen that is clearly set up to churn out the burgers come lunchtime. The biscuits here are squarer and sturdier than most, so they hold up well when stuffed with things like a substantial piece of fried chicken. The Red Eyed Mule also cooks eggs to order with a variety of egg sandwiches on toast. But why get toast when you can have a biscuit? Don't skip the three cheese grits, which avoid the gloopiness so many others fall prey to. Hours: Mon.-Sat., 6 a.m.-2 p.m. 1405 Church Street Extension, Marietta. 678-809-4546. www.theredeyedmule.com.


4. Mountain Biscuits: According to Mountain Biscuits' owner Deborah Ingram, "biscuits are the universal food." Mountain Biscuits offers what she calls a cathead-style biscuit, featuring lard in the dough, all cut by hand. "It's a labor of love," Ingram says. These biscuits are relatively flat, begging for something to be stuffed in the middle — country ham maybe, or sliced pork tenderloin. At Mountain Biscuits, as with Stilesboro and the Red Eyed Mule, you order at the counter. While there are several tables, most of the customers lining up in the mornings take their biscuits to go. Look for an expanded kitchen and menu coming soon, with pancakes and omelets on the way, though biscuits will always be the focus. You can satisfy your sweet tooth with a cinnamon roll for dessert and Mountain Biscuits even offers a fried version for full sensory overload. Hours: Mon.-Fri., 6 a.m.-2 p.m.; Sat., 7 a.m.-2 p.m. 1718 Old 41 Highway N.W., Marietta. 770-419-3311.