Opinion - Why we blocked the Downtown Connector

To stand against police brutality and mass incarceration, traffic needed to stop 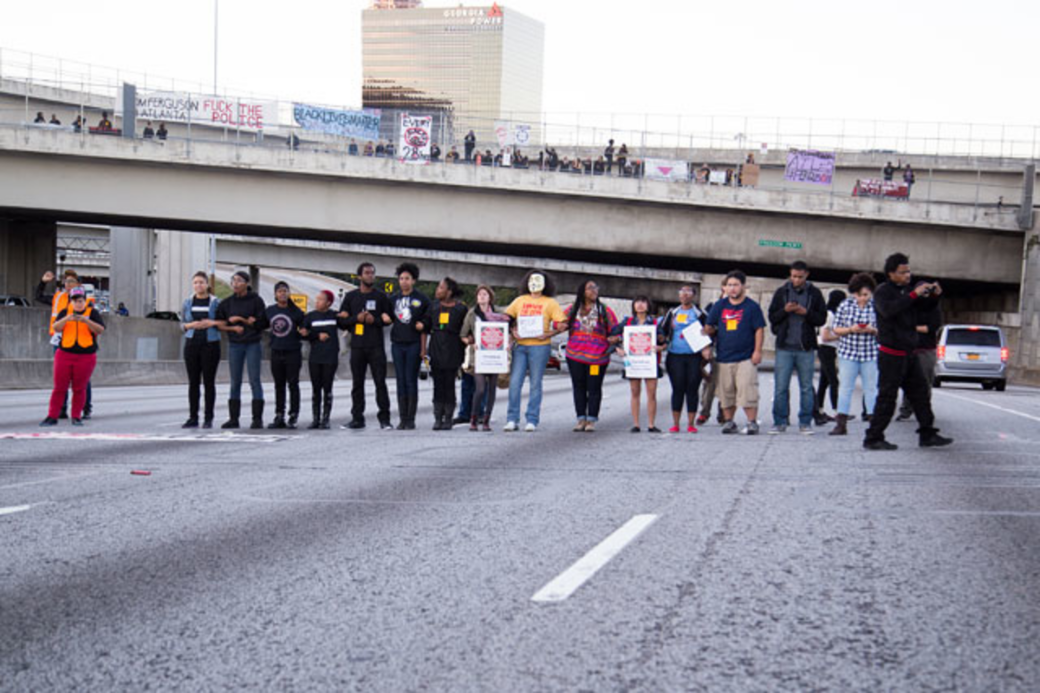 The worst part of going to jail, to me, is seeing the group of people that I like to call "the regulars." These are men and women who think of the justice system as a crazy merry-go-round. These people know that there are new laws created to entrap them. They are young black men who know that they were treated differently for their crime. Young men who feel targeted by police. They can tell you which judge you are going to see based upon your charge. They feel that the system is all a scheme to make money. They are stuck on this merry-go-round, and they don't know how to get off.

Two weeks ago I was one of 14 people who were lucky not to get thrust into that system. Earlier that evening, I gathered with more than 200 other people in Woodruff Park to protest police brutality and mass incarceration. We chanted, beat drums, and called for action. Then we started walking toward Freedom Parkway, holding banners and two makeshift coffins to represent victims of police violence. A group of us walked onto the Downtown Connector, locking arms, facing down evening rush hour traffic, and taking a stand against the system. Cars backed up as far as we could see.

There was lots of commentary about our decision to block traffic. Some people applauded. Others were angry that we might have inconvenienced people. But we marched to make a stand against a system that "the regulars" know and to send a message around the world that mass incarceration and police violence is taking — and killing — more young black men than ever before. According to a Pro Publica analysis, young black males were 21 times more likely to be shot and killed by police than their white peers. And a 2013 Pew Research report found that black men were more than six times likelier than white men in 2010, the most recent year data was available, to have served time in prisons and jails. That's higher than it was in 1960.

As we marched toward the highway, I came up with a number: 15. I call it my "black body count" number. That's the number of brothers, college friends, and nephews that I represent when I protest against police violence. That's 15 young men — artists, lawyers, doctors and carpenters — who, in the course of their lives, could be unfairly targeted and killed simply because their skin is the wrong color. We marched that day because we find this unacceptable.

All of us who gathered and prepared to march that day have their own black body count. We all know black and brown people who have been stopped by the police without cause or who have been victims of, or affected by, police brutality and police violence. We represented all of them with bold action and by a bold decision to make a stand and send a message. We were standing up for the millions more who have no platform to be heard upon.

Ever since Michael Brown was killed by Ferguson, Mo. police officer Darren Wilson, and police tried to tear gas Ferguson into submission, I've imagined a timer above the head every young African American I meet. Sometimes I imagine it says 100 years, or 50. Other times it might say 3 weeks or 3 days. This timer, in my imagination, tells me how long this person has before he is unjustly attacked, harassed, or mistreated by a police officer.

It's not fair that we even have to wonder.

Many black men and women are born into an environment that, in many ways, denies their right to exist. Everywhere they go, they're told that they're not good enough. They make less money than their white peers, they get approved for fewer loans, and they are accepted into fewer prestigious academic programs. They are less likely to be forgiven for their mistakes. They must work harder than anyone else to just get a foothold. And, at any moment, that foothold could be removed. At any moment, their brother, uncle, or son could be killed by gun owner toting his weapon in the name of self-protection. Then they have to deal with the fact that this gunman may not be held accountable for murder, for transgressing state law.

These are the reasons we shut down the highway. We represent an entire segment of humanity that doesn't seem to get the same rights as other humans. I intend to put pressure on Georgia officials until they provide better answers for what happened to Kendrick Johnson, a 17-year-old high school student who was found dead and rolled up in a wrestling mat in a Valdosta County school. And why 24-year-old Charles Smith was shot and killed by a police officer in Savannah. We intend to get justice for Michael Brown. We will continue marching on the highways of America until the country acknowledges and repairs the sickness of institutionalized racism.

So what's next for us? We intend to organize people around our young men and women. We intend to teach the world that black lives matter. We encourage anyone who was inspired by our protest to join a local chapter of an organization that is motivated to make change, become an active participant in the issue, and make a difference. Stopping traffic is only a beginning.

Yoehzer Yeeftahk is a spoken word artist and activist. He lives in Atlanta.