And it's the party's own fault 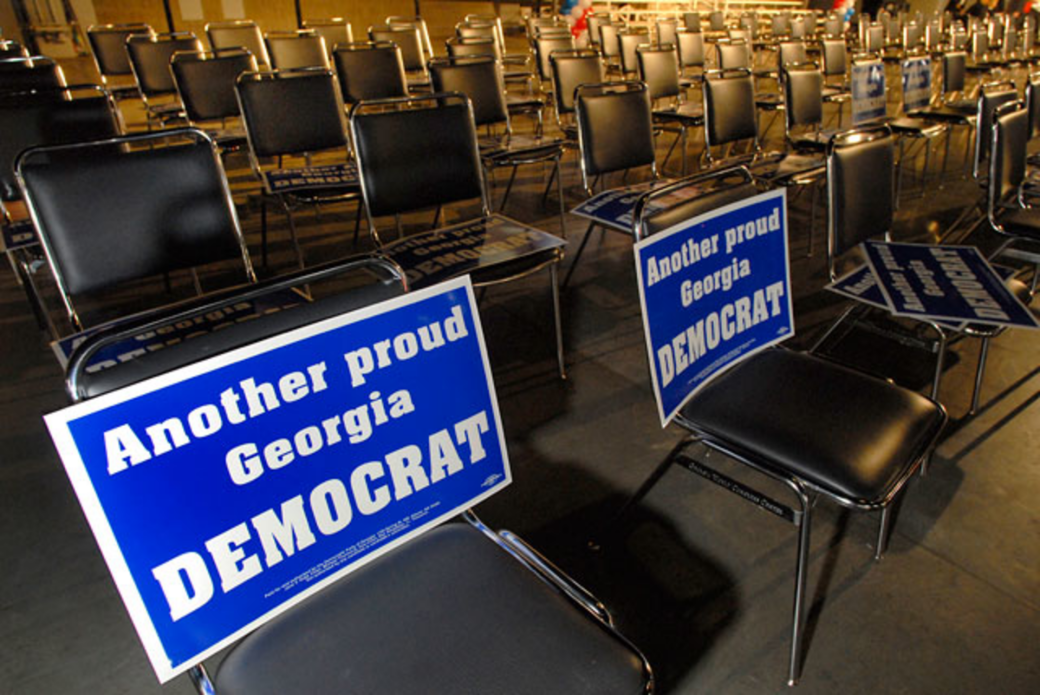 Democrats both at home and across the nation got pummeled on Election Night. It's baffling that Georgia residents re-elected Gov. Nathan Deal. Why did voters, in a state where roughly one in five live below the poverty line, re-elect an incumbent plagued by allegations of ethical misconduct? We're still wondering how David Perdue, a man who's made a living outsourcing jobs and who wants to repeal the Affordable Care Act, was voted into office. How does that happen in a state with the nation's highest unemployment rate and more than 400,000 uninsured residents? In states across the nation, why did voters approve progressive ballot issues such as minimum-wage tax hikes, saner gun laws, reproductive rights, and marijuana legalization, but reject candidates that advocate for such measures?

The Election Night rout came as a shock to the Democratic Party, especially in Georgia, where it seemed like it finally had a shot again, in part because of changes in the state's demographics. Georgia's Democratic Party has struggled the last decade, frequently watering down its stance on progressive issues with conservatism. Republicans, on the other hand, have made their stances clear. While 2014 Democratic senatorial candidate Michelle Nunn had difficulty articulating a strong stance on gay marriage, for instance, there's no question how the newly elected and regressively conservative Congressman Jody Hice, R-Athens, would vote on that issue. "It's Georgia, Democrats have to do that in order to win," people say. Obviously, Democrats are not winning. And it's the party's own fault. Changes in demographics alone won't help Democrats. Georgia Democratic candidates need to quit pulling their punches and advocate more strongly for progressive policies.

Democratic candidates in Georgia have an identity crisis. Republican domination has largely occurred because Democrats have failed to rally voters around a meaningful alternative to the status quo. Look no further than Democratic gubernatorial candidate Sen. Jason Carter's perplexing support for the "guns everywhere" bill or Nunn's hesitance to stand behind the Affordable Care Act. They tout moderate beliefs because they're fearful of alienating voters, and, in the process, many voters end up uninspired. Historically, Democrats don't come out nearly as strong during midterm elections as Republicans. But this year's turnout by black voters and young people 18-29, two groups that tend to favor Democrats, was lower than in 2010, according to exit polls. Even Atlanta Mayor Kasim Reed, one of the state's most prominent Democrats, held a fundraiser for Carter but did not officially endorse him. A united Democratic party could have challenged the ambitious mayor's indecision and convinced him to put aside personal politics to help Carter win.

Democrats are in the habit of being reactive, not proactive. In general, Republicans have a keen ability to convince people why an issue is worth supporting — even if it's crazy — and succeed. That takes endurance, confidence, and faith that what you're espousing is not just good policy but right. Republicans are also good at deciding the debate. Democrats often end up backpedaling in defense instead of getting in front of Republican attacks. Democratic candidates should be working harder to debunk the mythical benefits of trickle-down economic policies that don't help low- and middle-class people. They should be wholeheartedly backing progressive proposals such as the ACA. They should discuss the importance of common-sense gun control measures with the same zeal that the GOP brings in defense of Second Amendment rights, and proudly push a civil rights-focused platform that includes immigration reform, marriage equality, and reproductive rights.

That's the kind of progressive Democrats we and many other Georgians want to vote for: Advocacy groups such as Occupy Our Homes Atlanta and Moral Monday Georgia are helping to raise awareness about some of these important issues that relate to all Georgians, not just Democrats. Judging from the strong support for progressive ballot measures in other states, including red ones, we're not alone.

Republicans made such huge gains across the country in part because they've successfully drummed up strong anti-Obama sentiment over the last two years. They elected to campaign against the president's agenda instead of govern the country. In Georgia, GOP lawmakers have particularly benefited from gerrymandered political districts that have made many Gold Dome seats unwinnable for Democrats. In this past election, nearly 80 percent of candidates running for Georgia House and Senate seats ran unopposed.

Georgia remains a red state. A red state with stunning inequality, corporate giveaways, and a suffering population. The Republicans largely won because beating up on Obama, a man who wasn't even on the ballot in Georgia, proved to be a wildly successful strategy. But guess who won't be on the ballot come 2016? Yep, you guessed it: Obama. If Republicans can create a bogeyman out of thin air and succeed, Democrats should be able to create a groundswell of support with reality.