Buckhead is no longer the epicenter of Atlanta's once buck-wild nightclub scene - and that's the way most residents like it. Although we're still waiting on the ritzy Streets of Buckhead development, the area has long been among the top shopping destinations in the Southeast, with its two high-end malls and countless swanky boutiques and salons. And Buckhead has more luxury hotels and restaurants than anywhere else in Georgia - if that's your thing.

Things to do in Buckhead

The glassed-in bar area is a proper setting for the glorious cocktail creations at H&F, because some nights it seems the drinks should be put in a case and studied by future generations. (We're partial to the rye-'n'-bitters-fueled Awry One, but try 'em all.) The drinks pair wonderfully with its selection of fat-flecked meats.

The $15 million, 35,000-square-foot interactive attraction plays by the same rules as Chuck E. Cheese's and doesn't permit adults without a child. (It does plan to hold occasional "adult nights" in the future.)

Open 10 a.m.-10 p.m. Monday through Saturday (and 11 a.m.-7 p.m. on Sunday), Oxford Comics is a great place to rediscover the joy of comic books. Stop by May 5 for Free Comic Book Day and (until 7 p.m.) you can get a quick sketch for your kid from comic book artists on-site.

Go to the Museum of Contemporary Art of Georgia

MOCA GA turns 12 this year (although it's been in this space just since 2007), and you can celebrate by supporting this nonprofit that houses more than 600 works by 200-plus Georgia artists in its permanent collection. (It's $5 admission for nonmembers, but artist's talks are free.)

This city tradition starts at Lenox Square mall and it was until recently the largest 10K in the world (damn you, Toronto!). Still, 70,000 people registering for 60,000 spots is nothing to sneeze at. Celebrate America's birthday by getting sweaty and cramping up, like everyone else does.

This is self-explanatory, but, seriously, take you and your Dodge Neon to the mall, bring a bottle of water and folding chair, and take Instagram shots of the most outrageously sweet line of autos this side of a car show.

Read at the Buckhead Branch Library

If for no other reason, because it qualifies as a gem of modern architecture. Designed by locals Mack Scogin and Merrill Elam and seemingly covered with slate fish scales, it's been a pilgrimage spot for aspiring architects since opening in 1989.

Act fancy and have afternoon tea at the swanky St. Regis

According to the hotel, you can "celebrate the arrival of spring during a St. Regis Atlanta Afternoon Tea experience." With that many capital letters and the word "experience" tacked on, how could it not be divine? 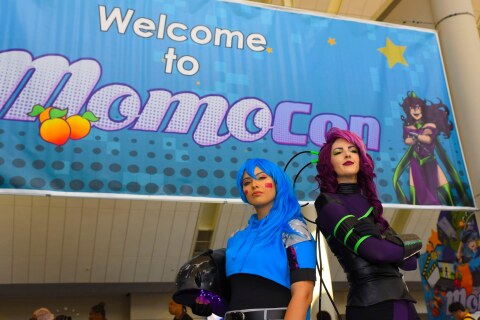 This year's film festival was been held April 22-May 2nd in a virtual format. Browse the Atlanta Film Festival schedule as well as recommendations.  | more...
Search for more by Staff
[Admin link: Neighborhoods - Buckhead]