Brian Regan refuses to hang up his hat

Brian Regan has been in the comedy game for around three decades and shows no signs of stopping any time soon. Ahead of his show at Chastain Park on Sept. 23, Regan squeezed in some time to chat with us about career longevity, going back to school and not wanting to be known as the Blank Guy.

You're originally from the Miami area. Do you have any family who stayed in the city to ride out Hurricane Irma? Have you heard from them?

Yes, my mom and some of my brothers and sisters still live in Florida around the Tampa area. Everyone is safe. It was just a little scary. It was weird seeing the TV all week have a giant arrow pointing to Miami with a big #5. I hope all is well with you, your friends and family and the Creative Loafing office in Atlanta.

All right, let's take it way back and start from the beginning. What's one of your earliest comedic memories?

My mom and dad were funny. My brothers and sisters were funny. I grew up with funny. I was one of my parents' eight kids. I remember being in the station wagon as a little kid and passing a funeral procession. I asked my dad if he had ever seen a real live dead man. He must have laughed for 10 minutes. And I just remember thinking, "What was that?" Looking back, that was my first real laugh. It was absurd, and I hadn't meant it to be, but it felt good.

Did you ever feel like you needed to compete for laughs growing up in such a large family?

I never thought of comedy as a competition, and I still don't. I love laughing as much as I love making people laugh. I still feel that way to this day. I never understand when people come up to me after shows and whisper that they thought I was funnier than the other guy. I just want you to tell me that you thought I was funny. I don't need that to take away from anybody else.

I've always loved playing Atlanta. I remember going into the Punchline is that still a venue? for an audition. I was sitting in the back of that club waiting for my audition, and they let me do an opening act. A few years later, they gave me a little act. A few years later, they gave me a headlining act until I was ready to start selling seats at bigger venues. Since then I've done shows at the Tabernacle, Coca-Cola Roxy Theatre, Cobb Energy Performing Arts Centre, the Fox Theatre. I like switching things up in terms of venues, playing outside amphitheaters and stuff. That's why I'm exciting to be playing Chastain Park, so Atlanta can experience my show in a new way.

What do we have to look forward to in your upcoming Netflix specials?

The topics themselves sound dull, but in comedy it's not really about the topics; it's about what you do with them. In my specials I talk about sports, board games, foreign policy, and my dad, who passed away shortly after we filmed the first special. And all of that is told through the skewed prism of Brian Regan's brain.

You are known for keeping your routines clean. How do you determine what material to cover and what to let be? Do you feel this limits you in any way?

I've always had the reputation of being clean, but it really started to matter more when I started playing theaters. They're the type of venues where people can bring younger people. It really wasn't until then that I realized I had a younger audience. I try to be respectful of the fact that I might have a 13-year-old in the audience. At the same time, I'm not trying to make it a kiddie show. I'm not up on stage twisting balloon animals. I do think of things that are dirty or foul, but I have a certain reputation to uphold. Part of the fun is trying to see if I can get a room laughing without using certain buzzwords. There is plenty to talk about, so it's not really limiting.

You've been a professional comedian for about 30 years now. Do you ever run out of material? Does it ever get old?

That's what's so interesting about comedy: There is always something to talk about. Sometimes you're banging on all cylinders and your brain is going berserk, and other times there are dry spells. But even the dry spells are an opportunity to get back to the material I've already got in the works. I am careful not to paint myself into a corner. I've noticed that some comedians, when they get a reputation for something, really run with it. They say, "Hey, here's something I can hang my hat on." I try to write away from that. I'm trying to make your job harder, Ariana. I don't want to be known as Brian Regan the Blank Guy. I don't want to be known for anything specific.

Have you spent a lot of time in Atlanta? What are the must-visit places on your list each time you come to town?

Now that I do more one-nighters, it's hard to really experience cities like I used to, but I have a lot of family and friends in Atlanta I like to visit. And I always really liked going to the Varsity to get a big sloppy cheeseburger.

You eventually went back to school after dropping out to pursue your comedy career. Why was it important to go back?

Well, I dropped out when I was 10 credits shy of graduating. There were complications with class scheduling and certain classes only being offered in one semester or another, so basically it was going to take me longer than a semester to finish the last ten credits. It was a nightmare scenario.

In terms of my comedy career, I was already champing at the bit champing at the bit not chomping, as Uncle John corrects us in one of his books. Anyway, so I thought I might as well give this a try and just go back to school later. It was always in the back of my mind. I always knew I would go back, but then my comedy career got in the way. I was at my 15-year college reunion when one of my old professors suggested that I come back to finish. After all, it was only 10 more credits. I didn't think there was any way. I couldn't go back there. I was already in real life, but we worked it out so that I could send in the papers and get the necessary credits to graduate, so I did. I majored in Communications and Theatre Arts.

I still had this empty feeling that I needed to fill with the graduation ceremony. So I flew up my mom and dad, and I did the whole robe thing, and I walked. Here I was, this grown man walking with a bunch of kids. Then a few years later they gave me an honorary doctorate! I just thought, "What did you make me come back for? I wasted all that time learning stuff."

What advice do you have for comedic hopefuls?

If you have a passion, I think you should pursue it. Even if it's a little risky. Life is a little risky. You should do it anyway. I think most people who are really drawn to comedy have that passion. I always talk about the butterflies in the stomach, you know? I think the most profound moments in life are usually the ones right after those butterflies, so do anything you can to get them.

The stars aim to extend their super powers beyond the screen | more... 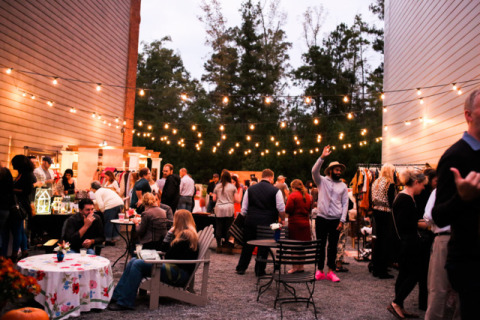 The fall fair returns to Serenbe on Oct. 14 | more...
Search for more by Ariana Newhouse