Krog Street Market gets even hotter with hot chicken 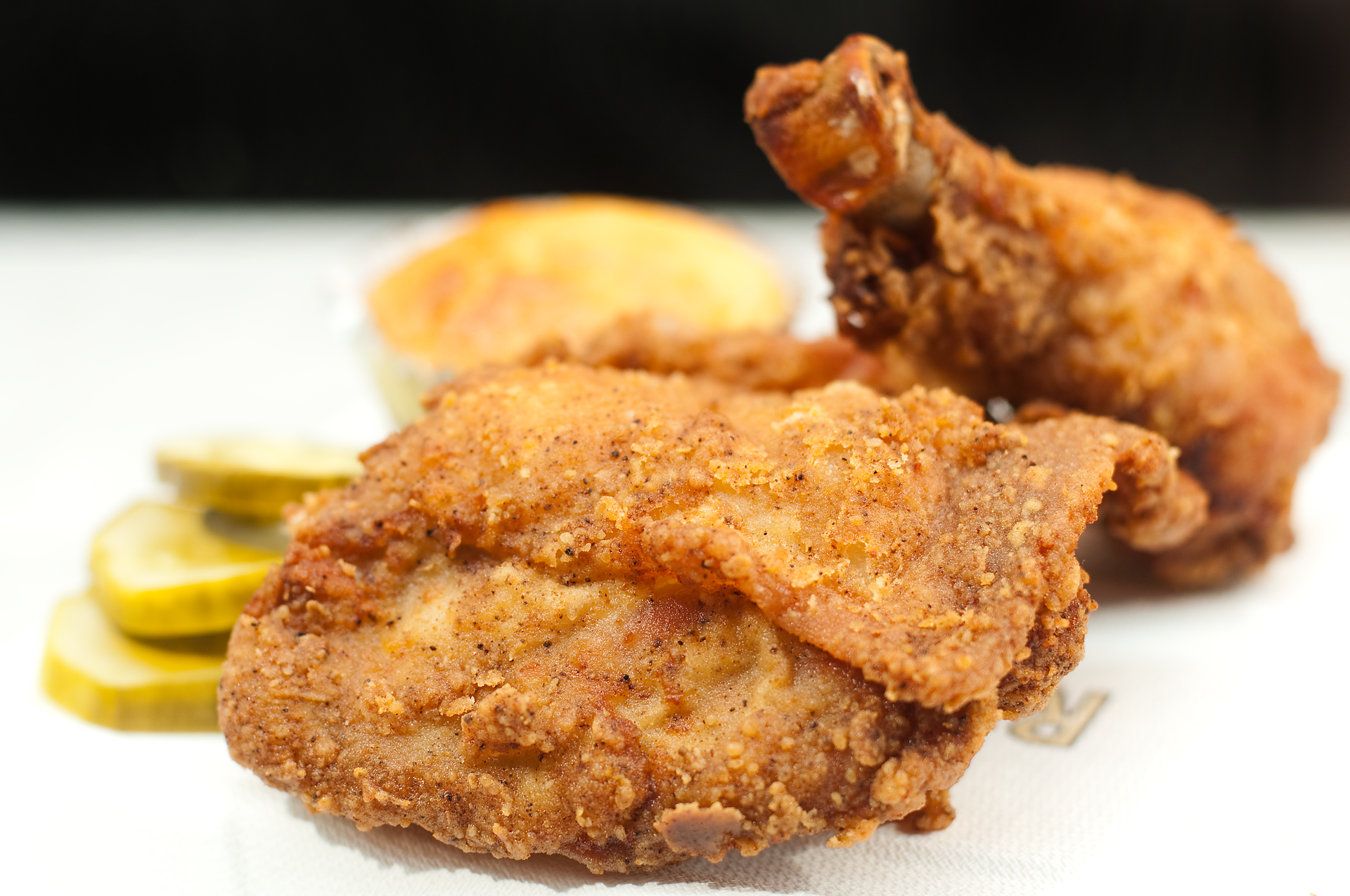 I'm surprised it took this long, but Krog Street Market finally has a fried chicken stand to join the barbecue, hot dogs, burgers, and ice cream (and other things). Richards' Southern Fried opened in early July. It's a project from well-respected chef Todd Richards, who previously ran the kitchen at the Pig & the Pearl, the Shed at Glenwood, and the Ritz-Carlton Buckhead, and who still pulls double duty as executive chef of White Oak Kitchen & Cocktails. With Richards' Southern Fried, the chef offers a short menu that manages to honor traditional preparations with just enough cheffy touches to keep it interesting.

There is, of course, fried chicken. When you order at the counter, you get to choose the combination you want and then one of three spice levels: classic, hot, or Richards' hot ($10.95 for a thigh, leg, side, and corn muffin; $13.95 if you go breast and wing). The meat is brined and air-dried before being pressure fried, producing an admirably crisp crust and a perfectly juicy interior that's as flavorful as any in town.

If you're heat averse, the classic option lacks any discernible spice at all. Richards' consciously avoids mentioning the word "Nashville" anywhere near its chicken, but the hot and Richards' hot varieties are both brushed all over with rust-red cayenne-stained oil, a technique similar to most Nashville-style hot chickens. Richards told me that he appreciated the Nashville comparison, but made sure to point out, "our chicken prioritizes flavor, then heat, as opposed to the other way around."

Sure enough, even the Richards' hot option avoids anything close to the high end of the Scoville heat scale. As you eat the chicken, the cayenne-driven spice builds to a slow burn, tingling the tongue but never producing the sweats or watering eyes that some Nashville hot chickens are known for. In other words, if you like spice, go for the Richards' hot, but don't expect an extreme eating experience. Richards' is kind enough to provide a moist towelette with every order, which comes in handy to clear your fingers and chin of the somewhat drippy oil that coats the chicken.

The boneless fried chicken breast in Richards' signature hot chicken sandwich ($8.95) comes sandwiched between a pile of squeaky-crisp chow chow and a smear of relatively dry (not much mayo) pimento cheese. It's messy as all get out, and the bun may start to give as you work your way through the substantial sandwich, but the flavors and textures come together wonderfully. Another towelette please.

Richards' also offers a few fresh seasonal sides and a daily special. On Mondays and Tuesdays, it's a cup of red beans and rice studded with shredded chicken made according to Richards' father's recipe. At first glance, you might mistake it for Brunswick stew, but keep digging and you'll get down to the beans and rice. Later in the week, you can get hot chicken mac and cheese, or a fried catfish variation on the hot chicken sandwich. The weekends bring the option of chicken and waffles. On one visit, the waffle batter was accented by roasted sweet potato purée and cinnamon; on another, it was collard greens that found their way into the mix. I haven't tried those waffles yet, but I'm sure the sweet house-made bourbon hot sauce would make a stellar syrup regardless of the chef's weekly flights of fancy.

Back to the sides. There's currently a choice of potato wedges, pickled slaw, an unfortunate cold and mushy tomato-cucumber salad, or a much more satisfying creamed corn full of corn that is plump and fresh and locally sourced when possible. Corn muffins come with each order of fried chicken and are lightly sweet — Richards calls it Mason-Dixon cornbread, a recipe he started making over a decade ago as a chef in Louisville, Kentucky. It might piss off the Southerners who insist on no sugar, or disappoint the Northerners who want it even sweeter, but when drizzled with that bourbon hot sauce, it just might bring the cornbread camps together in sweet peaceful harmony.