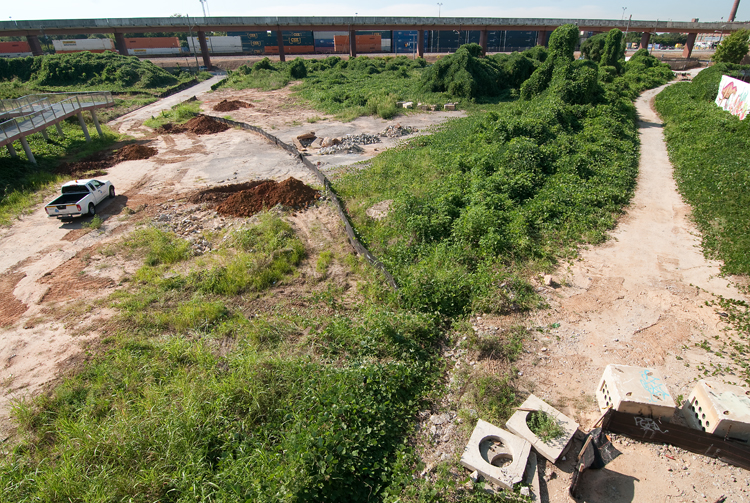 Of all the twists and turns the Atlanta Beltline must make to become the 22-mile loop of parks, trails, and transit envisioned years ago by Ryan Gravel and later the community, one of the most challenging and confusing is how the project should make the leap from Inman Park to Cabbagetown and Reynoldstown.

Should crews tunnel under DeKalb Avenue, the freight rail line, elevated MARTA tracks, and Hulsey Yard? Build a flyover ramp? Maybe avoid the headache altogether and take surface streets and the Krog Street Tunnel? Or use another route entirely?

Now a mixed-use development along the Beltline and DeKalb Avenue that originally called for separating the trail from the transit corridor has sparked debate over the project’s future in the area — and how vigilant residents should be in making sure the vision that they want to see gets built.

On Aug. 17, North American Properties, the developer that overhauled Atlantic Station and is now remaking Colony Square, presented plans to the Inman Park Neighborhood Association for its retail and residential development along DeKalb on vacant land near the Krog tunnel. NAP proposed the Eastside Trail running between two buildings on the property and then snaking toward the Krog Tunnel. The tracks could one day possibly be built in a long tunnel rather than a shorter tunnel, as the Beltline plan once proposed.

This isn’t a debate about how the development will look. Inman Park and Old Fourth Ward residents are focused on a bird’s-eye view of how Beltline trail and transit would deal with DeKalb now and in the future — and whether NAP’s proposal would rule out Beltline rail in that area in the long term.

According to IPNA President Neil Kinkopf, some residents voiced concerns that the proposed tunnel would be too narrow to accommodate the path and future rail line. Some residents at the meeting, including Gravel, the Beltline visionary, and observers who spoke with CL, questioned whether the proposed plan would allow transit to happen at all. And if streetcars found a way around the logjam, what would that mean for the commutes of people jumping on Beltline transit in other neighborhoods and trying to access northeast Atlanta?

The Beltline is currently finishing a study of potential rail routes that it will submit to the federal government. The process is vital for the project to compete for federal funding.

Both at the meeting and in the weeks after, others have jumped into the mix. According to an article about the meeting by Thread ATL, an advocacy group aimed at better urbanism, Gravel told residents the debate “sounds like a technical issue, but it’s really a philosophical one." He said the site as originally proposed did not support the vision of the project that residents worked for years to craft. A few weeks after the uproar, Cathy Woolard, a 2017 mayoral candidate who played a key role in pitching the Beltline idea more than 10 years ago as Atlanta City Council president, penned a Saporta Report column calling for more City Hall leadership in building the Beltline. Some residents and activists were scheduled to meet at the site on Thursday at 6:30 p.m. to discuss the area and Beltline plans for that segment.

Some stakeholders argue it’s important to leave space for the future trail and transit line to potentially one day tunnel under DeKalb, as the original Beltline vision called for, so the project could connect to Hulsey Yard. Though a CSX spokeswoman tells CL there are no plans to sell the rail yard, it’s quickly becoming a sore industrial thumb surrounded by valuable intown real estate. In several years, trucks serving the yard will have to jockey for space with hundreds of new residents and shoppers at mixed-use developments planned along Memorial Drive.

What the debate has underscored, observers say, is the importance of residents to make sure that ABI, which is working with limited funding and on a tight timeline pushed by Mayor Kasim Reed to make progress on the project, and before an upcoming sales tax referendum to fund rail and buses, stays true to the Beltline vision.

“It is not enough for the community to be engaged; the community needs to lead the decision-making process,” says Kinkopf, speaking about ABI not sticking to preserving space for trail and transit to one day cross the MARTA and CSX rail lines.

NAP executives say they’re willing to work within whatever constraints the Beltline puts on their development. On Aug. 24, Inman Park residents, Beltline officials, NAP executives, and Atlanta City Councilman Kwanza Hall met to discuss alternatives. Beltline spokeswoman Ericka Davis says ABI has worked with nearby residents and NAP for 18 months about the site and are “refining the site plan as we proceed through the development process.”

The new site plan is in flux, she says, but will preserve space for a “double- track transit tunnel under DeKalb.”

Here's a look at the revised site plan, which Beltline officials stress is still a work in progress and subject to change.

And here's a rendering from the early stages of the Eastside Trail design process. The blank white space in the middle is Hulsey Yard. The shorter tunnel is the gray line running north to south. It's important to note that, as far as we know, no geological or engineering work has been performed for either concept.