But let's not forget about the locals ... 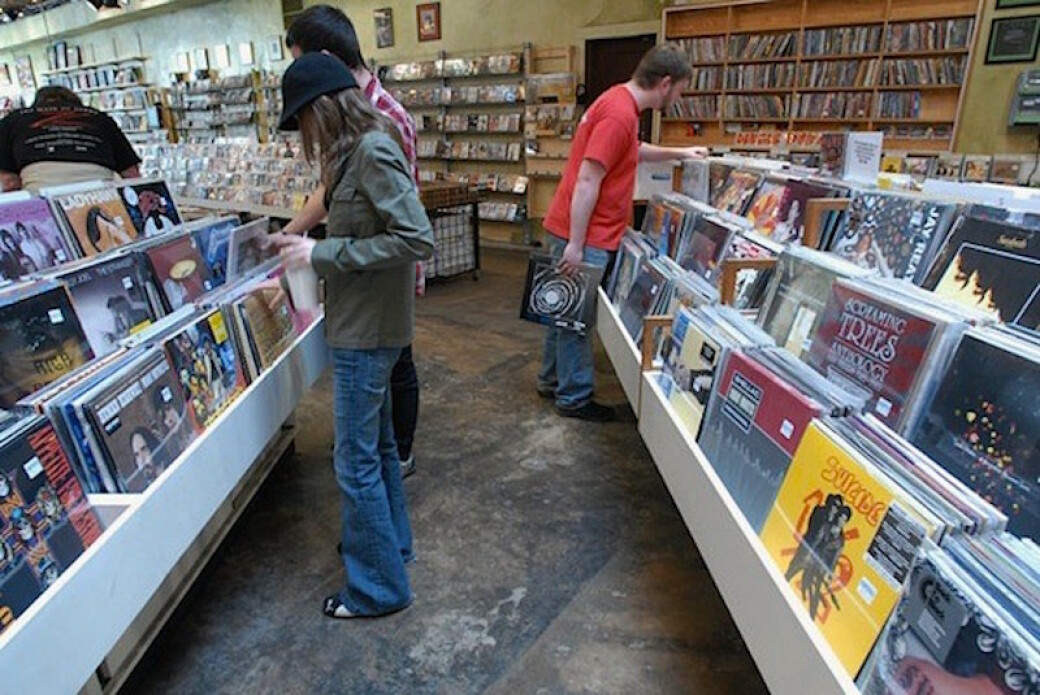 Photo credit: CL File/Joeff Davis
RECORD STORE DAY
By CL Staff Saturday April 21, 2018 11:19 AM EDT
Happy Record Store Day! If you’ve been waiting in line all morning, ready to blow your tax return check, and drain your bank account on some new vinyl, happy hunting to you. While you’re scooping up those deluxe reissues, why not put some of your hard-earned dollars back into the local music scene. After all, you’re there in a record store, ready to spend! A handful of CL music scribes have compiled this quick list of some of the more recently released local offerings worth your time and attention. We’re not really sticklers for format over here — CDs, tapes, 7-inches are all cool with us. Physical products are the gold that backs the economy. So without further adieu, here's a run through some of what we found. Of course, there's a whole lot more out there. Dig through some crates, that's what this whole day is about.

Protest is woven deeply into the fabric of Atlanta’s identity. Cut from that cloth are Algiers, who push a steadfast, relentless drive for social change and progress from a foundation of experimental post-punk. Gospel, soul, and hip-hop all make their way into the band’s sophomore 2017 record, The Underside of Power, giving that message a singularly relevant, irrepressible voice. The refrain, “We won’t be led to slaughter/This is self-genocide!" on album’s opening track “Walk Like a Panther,” is the rallying cry of a generation. This is only the beginning. — Sean Zearfoss

Written for the film Baby Driver, Danger Mouse’s “Chase Me” single takes listeners on its own high-speed ride through the streets of Atlanta. Danger Mouse, along with the titans of Atlanta music that unite on this track, pay homage to their home city as well as any movie could. Guided by a frantic and driving bassline, the flow of the lyrics drift effortlessly from artist to artist creating a stylized melting pot that encapsulates the film and city Danger Mouse is representing. — Will Cardwell

Atlanta thrash-metal masters Death of Kings released their magnum opus (so far) with Kneel Before None. The CDs dropped in 2017, vinyl arrived in January. Singer Matt Matson’s banshee howling and growling slays dragons, beasts, wizards, and warlocks with unrestrained power in nine barrelling and blasphemous songs with titles such as “Shadow of the Reaper,” “Hell Comes to Life,” and “Too Fast For Blood.” The drums, the guitars, the bass, and the shredding energy of it all packs a legacy of ’70s, ’80s, ’90s, and aughts shredding into a collection of seriously wailing deep cuts. BONUS: Boris records released a super limited, kick-ass clear-splattered vinyl version of the LP. — Chad Radford

Delorean Gray’s Star Tropics drips with equal parts tropicalia and space odyssey. As the former frontman for Fake Flowers, CL music writer Jacob Chisenhall is no stranger to the songwriting scene. Though he released Hokkaido Overwash more than a year ago, Star Tropics is a true debut for the solo project. The EP, released January 25, delves deeper into Chisenhall’s sci-fi alter-ego. Picking up right where Hokkaido Overwash’s vacation planet endeavor left off, we follow our protagonist’s latest island adventure and push the boundaries that determine what is reality and what is a figment of imagination. — Lauren Leathers

Ben Trickey’s Horizon Line Fires delivers a batch of industrial grade songwriter fair that’s too twisted, and complex to be labeled as simply folk or American music. The bleak spiritual and existential connotations swelling inside Trickey’s quivering voice belie any sense of primitivism in their deliver. And the buzzing textures filling the dark spaces around every note of songs such as “Howlin,’” “Soldier,” and “Burning Hell.” — CR

The rising hip-hop duo Danger Incorporated has been putting out their own creative and slightly comedic spin on the genre since 2015, and people are taking notice. Their latest offering Birds Fly by Night shows new innovations and evolution in the Danger Boys’ songwriting without sacrificing what sets the group apart from the masses. Their latest single, titled “Ashley Olsen,” blends originality, comedy, and catchiness to instantly become a Danger Incorporated classic. — WC

Artifactual String Unit plays a melange of chamber, jazz, alt-folk, experimental, and improvisational acoustic music. The instrumental lineup accounts for some of ASU's quirky allure. The real magic on the trio's eponymous debut, however, stems from the alchemical reaction between the technical acumen of Chip Epsten (violin), Benjamin Shirley (cello), and Gabe Monticello (bass), and the group’s clever compositions, which conjure up, among other things, medieval raves (“Dance”), swinging bacchanals (“Ruins of Mylar”), and tranquil reveries (“Partiality”). — Doug DeLoach

There’s something captivating about the sky. Perhaps it's the seemingly endless cascade of stars or the notion that extraterrestrial life may be out there somewhere. Whatever the case may be, it’s the uncertainty that drives the curiosity. Trash Panda's Starclimber is driven with this same inquisity, as evident in the group’s exploratory sound and songwriting. The intro and outro experiment with sound sculptures, kaleidoscopic guitars, and vocoders. A manic combination of euphoria and desolation dig deep into a variety of themes throughout the album, from Jungian psychology to satire pointed at the patriarchy and objectifying sex culture. CDs are out now. Vinyl is expected to arrive June 1. — LL

Somewhere between the gravel-throated howling of black metal and the sharp melodicism of hard rock sits Cloak, an Atlanta quartet that has been honing its craft for about five years. That work pays off on the band’s outstanding debut full-length, To Venemous Depths (Season of Mist), a nine-track collision of vibrant guitar riffs, thunderous drums, and Scott Taysom’s netherwordly growl. The best band in the world working within this framework is probably Tribulation from Sweden, but on To Venemous Depths, Cloak gives them a run for their money. There is no higher compliment. — Ben Salmon

With Carnelian, Chris Hunt's rich soundscapes transport listeners to imagined locations, vividly described without uttering a single word. Hunt’s aptitude for filmmaking is apparent as elicit imagery bleeds through on tracks such as “Teal,” “Smolder Hymn,” and the title track seamlessly moves from one vivid landscape to another. The album is consistent and cohesive, and each song commands its own space. Carnelian leaves much to the imagination, forcing the listener to fill in the gaps with their own creativity and meaning. — WC

Hearts are easily melted by Jordan Reynolds’ gentle guitar melodies and softly alluring voice throughout Rose Hotel's latest EP, Always A Good Reason. The 24 year-old singer/songwriter released the EP in August, marking the end of a romantic relationship, and the end of a band she had played with for half a decade. The result is an ethereal exploration through stages of grief ladened with introspective reflection. — LL

Soul singer Curtis Harding's sophomore LP, Face Your Fear (Anti-) sports a throwback vibe, sounding like an LP produced in the late ’60s or early ’70s, recently rescued from some dusty attic. And it is glorious. Face Your Fear is packed wall-to-wall with old-soul music, resplendent with psychedelic guitars, a Spandex-tight rhythm section, and Harding’s rich voice (and raspy falsetto) fluttering around sweet melodies. If you have an itch for both vintage and modern sounds, Harding will scratch 'em both. — BS

Though the peak of angst-ridden ’90s rock has passed, its influence lives on in Atlanta-based quintet Zale. The group creates haunting and gritty rock bleeding with the sense of rebellion we all know and love. The group’s debut 2015 album Fortress presented a blues-inspired alternative rock sound. Eye See You (Madison Records), released this year, provides riff-heavy rock ’n’ roll cut from a delicate combination of defiant youth and instrumental prowess. Still, expect the same soulful sounds that Zale has always possessed seeping through the cracks of classic rock ‘n’ roll. — LL

The idea of an album — a static, unchanging piece of art — from a band whose M.O. rests on fluid, off-the-cuff improvisation feels oxymoronic. Frank Schultz and Scott Burland’s longstanding Duet for Theremin and Lap Steel face this dilemma head on with their latest album 10, a self-released recorded with at least a little more of a concept than usual. Initially released on CD in October 10, 2016, the vinyl release marks the the duo’s 10th day, of the 10th month, of the 10th year of the band’s existence. This might have all been a happy accident — much like DfTaLS’ existence — since the album also contains 10 tracks of the moody, ambient, otherworldly music the duo has made its calling card. With the album’s recent vinyl release, your trip to the ether has even more permanence.— SZ

Faun and a Pan Flute's 2014-2016 is a taste of sound experimentation. The large ensemble pushes the boundaries of instrumental music and hits full stride with its second proper offering, 2014-2016. At times the instrumentation seems frivolous and intense, but every note and every nuance matters in the grand scheme, and it’s always appealing to the ear. Each rhythm possess a certain energy that is not only exciting, but challenges listeners to think outside the box. The CD is out there, but group plans to re-release the album on vinyl later this year, so keep your eyes peeled. — LL

Neighbor Lady’s debut LP, Maybe Later, effortlessly blends psychedelic indie-rock and country-western sounds to carve out a singular niche within the local music scene. Featuring elements of folk and plenty of energy, songs such as “Let it Bleed” and “Fine” prove that Neighbor Lady has created something special.— WC

Manchester Orchestra released Cope in 2014. In July 2016, more than three years later, the group dropped A Black Mile To The Surface, showing of a much calmer side of the band. While the album isn’t afraid to rock, it relies more on the overall production process rather than the gritty guitar and straightforward lyrics of M.O.’s previous albums. A Black Mile To The Surface is a step beyond the traditional indie-rock riffs of the group’s past, into a more mature, polished sound. — LL

Atlanta's long, complex history with garage rock was thought to have hit the ceiling long ago. That ceiling no longer exists after Mattiel smashed through it with her self-titled debut LP for Burger Records. Backed by Jonah Swilley, Randy Michael, and other session players, Mattiel is a diverse record with shifts in feel, rhythm, and instrumentation. Where lesser albums in the genre simply capture a band raw, “as is” in a studio, Mattiel is rife with organ, Rhodes piano, and, most notably, big, soulful Memphis-style horns. The album meets all the hallmarks of a perfectly gritty, garage rock record but transcends both the city and genre to which it is connected. — SZ

The funky, slide guitar-driven, organic Southern rocking of Michelle Malone on Slings & Arrows (SBS Records) is perfect for the analog, vinyl experience. The combination of Malone’s gutsy vocals with the warm, rootsy sound and earthy production was made for the medium, making an already gritty album even tougher. One spin of the pulsating Malone/Shawn Mullins duet on Otis Redding’s “I’ve Been Loving You Too Long” and you’ll be sold. Bonus! It’s on blue wax. — Hal Horowitz

January 12 marked the date that Georgia-bred, Nashville-based singer, songwriter, and guitarist, Sonia Leigh released her latest album Mad Hatter. Southern-tinged rock ’n’ roll is evident throughout each of the 11 tracks, shrouding the listener with a sinister veil of blues, country, and more often than not, whisky. The record is an aggressive collection of troubled confessions, often pushing Leigh to feel as though she is in the clutches of the Devil. The record relies on snarling guitar and heavily distorted vocals. Leigh settles in as a rebellious rock icon all while maintaining a cool, ghoulish demeanor — a feat that is only obtained by a seasoned, homegrown Tennessee rocker. — LL