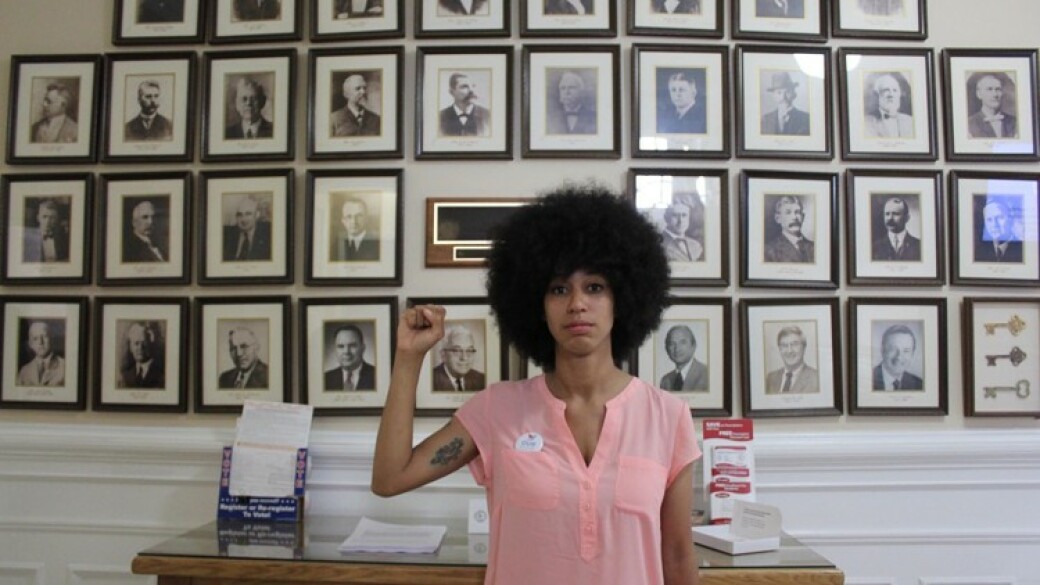 Over the last decade, hip-hop has lifted itself into the mainstream to become a tool of civic innovation and social transformation. As Mariah Parker, aka Athens rapper Linqua Franqa, takes office as county commissioner in Athens-Clarke County, Soul Food Cypher continues their work with the Greater Atlanta community, and A3C preps for another year of performances and panels at their annual festival, Georgia MCs and leaders carry the legacy of activism from the birth of hip-hop. Through their work, it’s clear that hip-hop is not just a thing you do — it’s a practice that can motivate people to engage with their community and inspire real comradery.

“You call it adorable, call it bein’ a know-it-all / You can call it uncouth, I call it speakin’ the truth,” Mariah Parker shouts on a particularly sweltering night at the Bakery for Southern Fried Queer Pride’s 2018 installment of their annual festival. She darts, gallops, even jump-kicks across the stage while delivering rhymes about life, social issues, and her own struggles at breakneck speed. She’s got the crowd under her thumb — the entire audience is at the edge of their seat as Parker puts on a show that’s not only seamless and impressive, but fun as hell.

It’s the same kind of energy on the stage — articulate, socially conscious, and full of infectious passion — that Parker brings to her new role as county commissioner in Athens.

“Once I started getting involved with politics, I came to see that a lot of the problems I’m trying to fight as an organizer within the Athens music scene were a lot bigger besides just bringing people together across perceived cultural boundaries,” says Parker about the beginnings of her campaign.

Last May’s elections in Athens-Clarke County’s brought a progressive wave for the historic college town, as well as national coverage of Parker’s controversial swearing in on The Autobiography of Malcolm X. A picture of her throwing up a fist while taking the oath of office became a viral sensation that incited both jubilation and criticism of the newly elected commissioner. Though she did not intend to provoke the mass coverage, the newfound attention refocused her efforts and the promises she made to her constituents.

In addition to being an active organizer in the Athens community, Parker is an ardent supporter of the city’s burgeoning hip-hop scene as a prominent MC and founder of Hot Corner Hip Hop. Founded in 2011, Hot Corner Hip Hop functions to “push back against racism and classism in downtown Athens through events which build creative, multicultural community.” Though hip-hop has been active in Athens since the early 2000’s, the growing traction of the organization surprised many in the community.

“People were so aghast, they were like ‘Oh? There’s hip-hop in the town?’” laughs Parker. “There’s always been hip-hop here.”

It wasn’t just everyday folks who were taken aback — the venues took a jolt too. While some initially worried that some sort of ‘gang fight’ might break out at a performance, the city music scene’s gatekeepers have loosened up and begun booking hip-hop acts alongside punk, jazz, and electronic acts. In fact, the city has openly embraced the new phenomena; candidates of May’s election brought on MCs at campaign events and even attended the Athens Hip-Hop Awards.

“[Hip-hop|Hip-hop] went from being like the bastard stepchild of the Athens music scene to ‘Oh, if I’m gonna seem woke I have to go the hip-hop show,’ which, bless their hearts for doing that,” says Parker.

Parker’s continued work in building Athens’ hip-hop scene through tireless organizing, establishing open and inclusive cyphers, and encouraging collaboration amongst venues and artists has contributed to her polished grassroots skills on the campaign trail.

“Through working with Tommy’s campaign, I came to see that in order to really fix the issues I’m working within music,” says Parker, “I would have to take it to a policy level.”

Yet, even as Valentine’s campaign director, she never imagined herself as a serious candidate. As a hip-hop artist who’s loaded lyrics reflect much of her own personal struggles, there was no way a campaign for public office could happen.

“I don’t even have any skeletons in the closet; they’re out there dancing in the streets,” jokes Parker.

Parker brought the same candor to her campaign — that unapologetic, passionate, and socially conscious dynamic of embracing the expertise of a lived experience as a means to resonate with everyday people.

About an hour and a half away from Athens’ political rumblings lies a packed room of MCs, aspiring producers, and hip-hop fans for Soul Food Cypher’s monthly freestyle event. Located in a small, black room in the Little Five Points Community Center, the room is overflowing with lyricists and curious onlookers to catch a slice of the action.

Asked what activism through hip-hop organizing can accomplish, Alex Acosta, executive director of Soul Food Cypher, without missing a beat responds, “change the world.” He laughs, then gets serious. 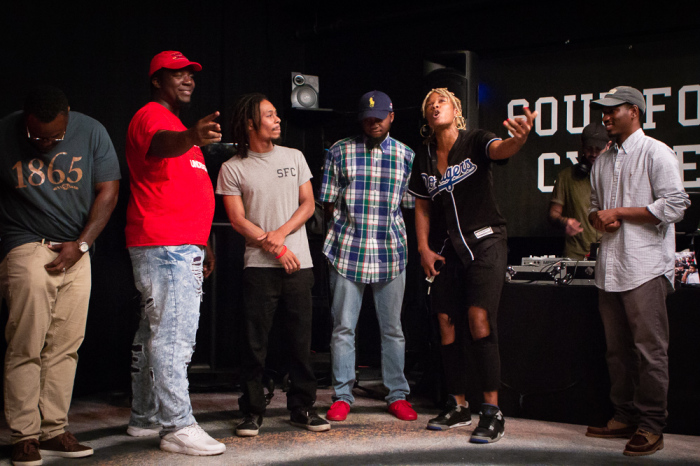 
Founded the same year as Hot Corner Hip Hop, Soul Food Cypher is a community arts nonprofit that utilizes freestyle rap to transform individuals and communities. After over half a decade of organizing, the nonprofit has held performances and workshops across a multitude of venues and institutions. They’ve hosted events everywhere from the High Museum and various elementary schools throughout the city, to panel discussions at the A3C Festival & Conference.

Acosta's work with a mentorship program at Whitefoord’s Center for Computers Clubhouse inspired him to start the organization. Initially assigned to teach his mentees photography, what really resonated with the kids was freestyle rap.

“When [the kids|the kids] got together on the Cypher, that’s when they really started to shine,” says Acosta. “They also had hard tales though, about experiences they had in the past.”

Acosta recalls one of his mentees in the cypher revealing he’d sustained two gunshots to the leg and experienced the death of his cousin. When he showed Acosta the scars, that’s when it hit him.

“I realized rap was like therapy for them,” says Acosta, “it was a sense of letting out, being able to be felt and heard as well as process their own experiences.”

Since the founding of the organization, Acosta and company have created a community that not only challenges each other creatively through cyphers and mentorships, but provides opportunities to work, thrive, and survive through the trying times in their life. As head of the nonprofit, Acosta intends to rebrand the MC as a leader in their community. As Acosta sees it, an MC is someone who is vocal about the issues they face, they’re people who serve as representatives of their community at large.

“When we talk about the power of hip-hop activism, we’re talking about all people and all their voices coming together to make a better world for all,” says Acosta.

Joining Acosta in establishing hip-hop’s place in our communities as a tool of social impact is the annual A3C Festival & Conference, an event that’s been called the “YMCA of music festivals” by Wu-Tang Clan’s Raekwon himself. Mike Walbert, executive director of A3C, laughs at the comparison.

“We would never say that we are the YMCA of hip-hop, but in essence, that’s what we’re trying to do with our open door policy, democratizing a lot of the things we do, and in providing a free space for people to participate,” says Walbert.

A3C’s Festival & Conference, a nationally respected hip-hop festival who’s 2018 lineup boasts Wu-Tang Clan and local heavy hitter J.I.D, began as a series of performances at Center Stage. It was after an intern suggested the idea of adding a panel to the festival in 2010, the dynamic changed.

“It was packed,” says Walbert of the first panel. “There was an understanding there that we were bringing a lot of people from the community and there’s an appetite and hunger for people to learn and to connect.”

Once the conference dynamic was incorporated into the festival, A3C’s mission extended from entertainment into exploring how to connect and educate people on how to become better artists and advocates for positive change in their respective communities. In recent years, they’ve launched an Action Summit with the Center of Civic Innovation’s Executive Director Rohit Malhotra.

The Action Summit was conceived out of a shared understanding between the two organizations that whenever hip-hop enters the conversation, so do issues of social impact and change. It’s a conversation about what can move people to act within the circumstances they and their communities face.

“If you want to talk about the narrative that’s transforming our communities, hip-hop is an incredible tool to do that,” says Rohit Malhotra. “If you want to get to the roots of social issues, there’s no data point that’s going to tell you about what’s going on in certain neighborhoods of Atlanta. Hip-hop brings life to data in a way we are just at the tip of the iceberg for.”

A3C’s Action Summit brings together nonprofits of varying expertise and tactics from across the country to have a conversation about how art, hip-hop, and music can advance social justice in underserved neighborhoods. It’s an event where a group of chosen nonprofits who have submitted their pitch is able to develop the scope and messaging of their work for the opportunity to network, earn grants, and learn from professionals in the field.

“What’s behind movements? Activists, academics, and artists,” says Mike Walbert. “An academic provides historical context and significance of a movement, an artist provides the look and feel and sound of every movement. If you can’t feel a movement, if you can’t see a movement, or hear a movement, it doesn’t take off. And then you have the activist who basically brings those two together. If we can get those three people through a summit, really cool stuff is going to happen.”

And seeing the jubilant faces of the MCs at the cypher, the energy behind festivals like A3C’s, and hip-hop’s own role in giving voice to real issues that affect real people, Malhotra is right — we’re just at the tip of the iceberg in seeing how far hip-hop can go in addressing social impact on an entrepreneurial and policy level. The genre’s been around for decades at forty-five years since its inception, yet new voices and ideas still continue to diversify and expand the platform.

Mariah Parker, who will continue her career as Linqua Franqa in office, now represents the people of Athens and makes decisions that can transform communities for years to come. And there’s already been progress — last month, Parker spearheaded an initiative to record and televise the meetings between the county’s Mayor and commissioners in order to provide more transparency of the political process.

While she waits for her progressive colleagues to join her, as a minority in the commission — in age, ideology, and skin color — she anticipates the road ahead won’t be easy but nevertheless necessary.

“Even in the face of opposition, we need to voice a need for a more radical conversation and voice the frustration of the community,” Parker says. “Some people call it symbolic, but it’s never symbolic if you’re standing up for what the community really wants.”