‘Breaking Barriers: Sports for Change’ seeks equity for all 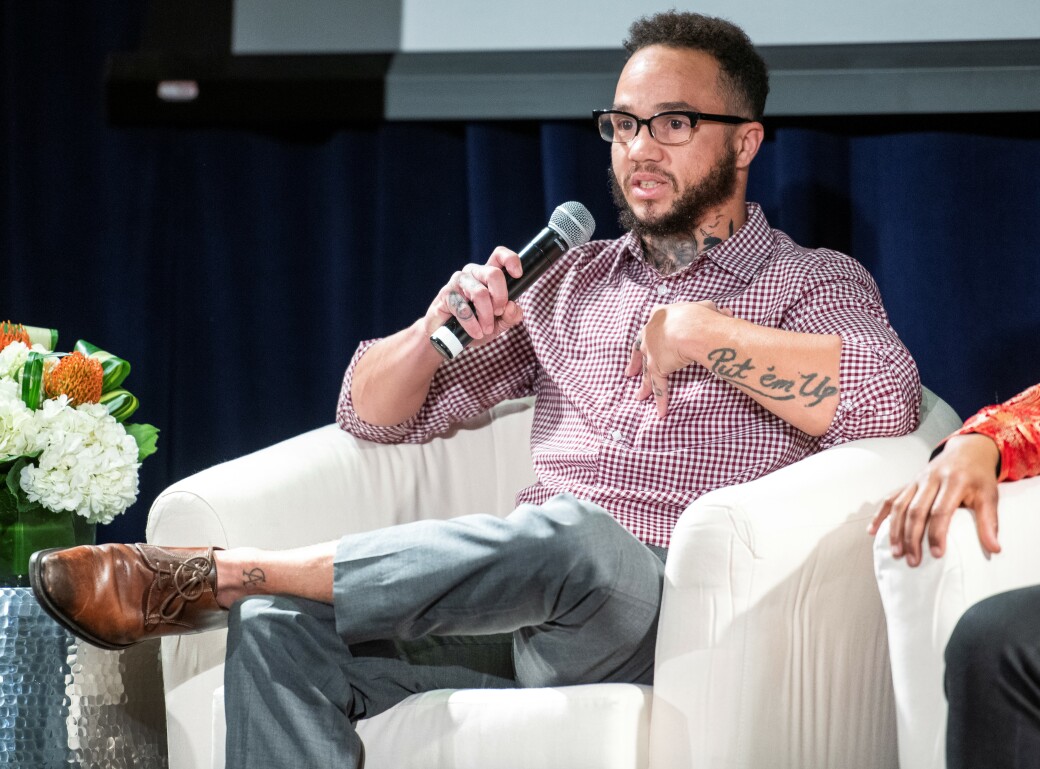 Photo credit: Courtesy of National Center for Civil and Human Rights
PUT ‘EM UP: Transgender boxer Patricio Manuel is one of many athletes who continues to redefine what athletes should be.
By Will Cardwell Thursday February 14, 2019 05:16 pm EST

Televised sporting events are among the most viewed broadcasts in the nation, complete with crowds of impassioned fans. With so many eyes on the players, it’s common for successful athletes to become household names, many being idolized by the general public. A select few athletes have recognized their level of influence and visibility, using their stature as a platform to create real societal change both on and off the field. The National Center for Civil and Human Rights traveling exhibit Breaking Barriers: Sports for Change, currently in Atlanta, seeks to pay tribute to such individuals and their contributions to social justice.

The National Center for Civil and Human Rights has partnered with ESPN in the creation of the exhibit, with the goal of examining the multiple intersections of human rights and sports throughout time. Breaking Barriers: Sports for Change debuted in Atlanta, but has made its way across the country, finding temporary homes in places like Tampa, Los Angeles, and the ESPN Headquarters in Bristol, Connecticut. The installation was expanded and tweaked at each stop along its journey, purposely finding its way back to Atlanta before the Super Bowl, certainly the biggest sporting event of the year.

“Our goal is to inspire folks who visit to find their voice and to see how sports can play a unique role in creating equity and acceptance,” says Ryan Roemerman, director of the National Center for Civil and Human Rights’ LGBTQ Institute and senior strategist. “People will be able to visit the center and learn more about the civil and human rights movements in general, but also see how sports can play a role in creating change.”

Breaking Barriers: Sports for Change’s return to Atlanta is more than just an attempt to increase its visibility with the those in town for the Super Bowl. The exhibit is as much a celebration of the city and its history of civil rights and social progress as it is of the athletes featured in the exhibit. The fight for justice mirrors Atlanta’s own significance and contribution to the Civil Rights Movement.

“The city of Atlanta is a place where the modern civil rights movement was born and that is something that we pride ourselves on,” Roemerman says. “The city understands that the fight for civil rights started here but it’s not over. It’s far from over. A lot of folks think of the Civil and Human rights movements through marches and things like that, and that is true, but I think the exhibit helps people understand that YOU can fight for civil and human rights and equity for all through a variety of platforms. We see that now more than ever.”

Legendary athletes Muhammad Ali, Jackie Robinson, and Billie Jean King, are some of those honored in the exhibit for their roles in advancing desegregation and minimizing gender disparity, but some contemporary sports personalities are given a spotlight as well. Bronze medalist fencer Ibtihaj Muhammad, the first Muslim American woman to compete wearing a hijab as well as the first Muslim American to be awarded an olympic medal, is one of the currently active athletes to receive recognition for her contributions to religious equality. African American women’s tennis player and gold medalist Venus Williams is featured as well for her representing black women as top athletic contenders.

While Breaking Barriers: Sports for Change celebrates the progress we’ve made as a society and the individuals that have done their part in fighting for justice, there’s still a long way to go. The recent harassment of Native American veteran Nathan Phillips during the 2019 Indigenous People’s March is off the court evidence of this. The National Center for Civil and Human Rights hopes that people find inspiration from the exhibit, and that they can continue the legacy started by these competitors.

“There’s always room for growth in terms of equity, even among current players,” Roemerman says. “At our launch the other night, we had Patricio Manuel, who is an American professional boxer and also the first transgender boxer in history to participate in a professional fight. Today you can see people challenging the concept of what someone who wants to play sports should be and has to be. People are really going to respond to that. As more folks use their platform as a way to educate, I can only hope sports becomes a more equitable place for all.”

The exhibit runs through March 29. Admission to the National Center for Civil and Human Rights is free through the end of February in celebration of Black History Month, courtesy of the Coca-Cola Foundation.

Thanksgiving events throughout the city, Small Business Saturday, Plasma Fest at the Bakery, and more | more...
Search for more by Will Cardwell
Culture Home