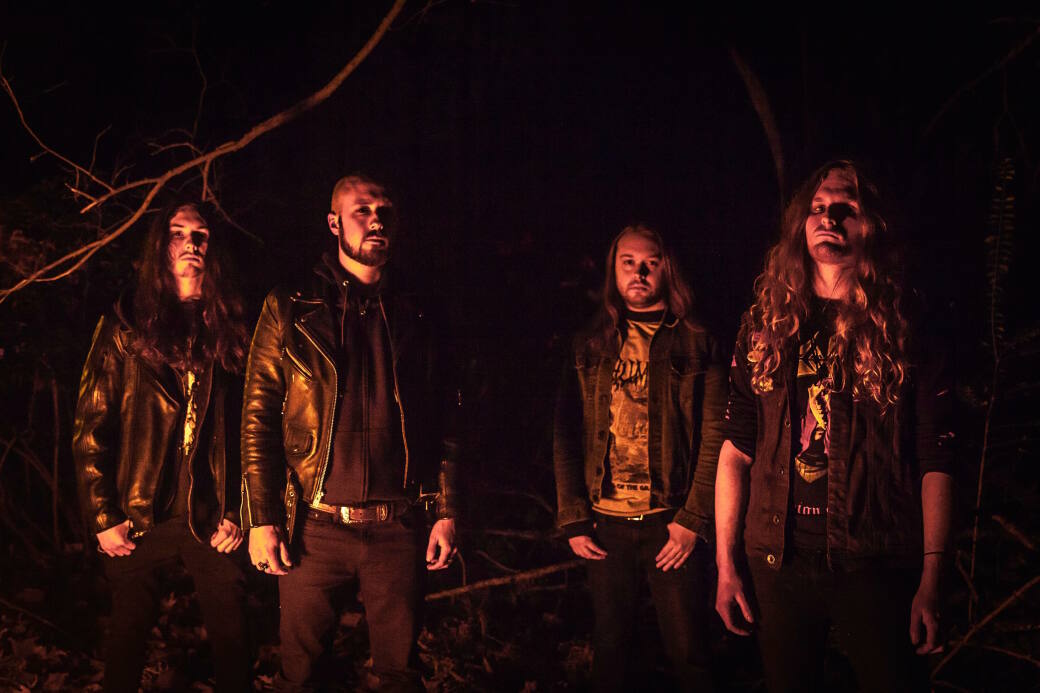 In the summer of 2012, Atlanta was a breeding ground for a raging heavy metal scene. For years, malevolent black metal masters Hellgoat, and death metal slashers Lectures on the Apocalypse, Withered, Death of Kings, and Spewtilator had kept the fires of Atlanta metal burning brightly in the underground. But that year, according to the Mayan calendar, the end of the world was at hand. A new breed of young metal bands and promoters rose to supremacy like thieves in the night and raised the bar high for whiplash fury, blast beats, and searing riffs. The apocalypse never happened, but the psychic tension it created was a boon for headbangers.

“It was a time when there were a lot of touring bands coming through town, and we had this one-two-three punch of Mangled, Sadistic Ritual, and Disfigurement opening pretty much every show, and everyone else got blown off of the stage,” says Charlie Southern, Sadistic Ritual’s guitar player, singer, and founding member. “I’m sorry, but it’s true. Basically, anybody who came through town back then didn’t stand a chance. And they definitely couldn’t hang as hard.”

Seven years later, the world is still here, reckoning with the very real threats of climate change, human overconsumption, poor governance, and species decimation paving the way for the sixth wave of mass extinction in the planet’s history. From that unholy trinity of Atlanta metal peers who, for a time, challenged any and all wayward metal bands, Sadistic Ritual is the only group still standing. Southern is the sole original member who’s stuck with the group since Sadistic Ritual’s first demo recording was released in 2010. “I've gone through a hellacious amount of band members since that time,” he says. “It’s purely by my will alone that this group still exists.”

Now, with a stable lineup settling into place, filled out by drummer Joe Sweat, and guitar player Alex Parra, Sadistic Ritual has entered a dark and more refined chapter, planting the group firmly in the modern era.

The June 14 arrival of Sadistic Ritual’s first proper full-length album, Visionaire of Death, is a vicious declaration of just how far Southern has pushed the band while grappling with forces beyond his control.

Visionaire of Death, a split release between Atlanta-based Boris Records and Athens’ Unspeakable Axe label, is an ode to death itself. From the title track to the mound of animal skulls on the album’s cover, the group tackles mortality on a grand scale with intimacy and urgency. “This is the first time the band has actually felt like a band,” says Southern, who also plays guitar with Birmingham, Alabama death metal trio Ectovoid. “We are all communicating well, writing songs together, and making decisions together.”

The level of musical skill and comprehension on display throughout songs such as “... In Cold Blood,” “Double Crossed,” and the epic, eight-minute album closer, “Cerebral Sacrifice” reaches a deeper plane of perception than any of Sadistic Ritual’s previous offerings. The ferocity and emotion channeled into each full-throttle melody, along with Southern’s scathing vocal assaults, culminate in a focused and antagonistic musical statement. The songs on Visionaire of Death feature former bass player Shawn Staszko, and have evolved far beyond the thrash metal tropes heard throughout releases such as 2013’s “Neurotoxin” b/w “Hellish Mercenary” 7-inch and 2015’s Edge of the Knife EP. The album pounces with aggressive fury, demanding the full attention of anyone within earshot.

“I don’t think Charlie even listens to thrash anymore,” says Chris Hood, who co-owns Boris Records. “I think he instead listens to recordings of artillery barrages, trauma operating rooms, and death rattles for inspiration.”

In the song titled “... In Cold Blood,” Southern screams, “Death / You get what you deserve / Despite the lessons you think you have learned / The wars you will start will finally meet their peace.”

Whether taken as a cautionary tale or as pure damnation, Southern’s songwriting has matured to an extreme degree. “With a lot of the previous material, I wasn’t writing about anything that I felt all that passionately about,” Southern says. “With this particular album, all of that has changed.”

Drummer Sweat adds: “[These songs] took a piece of Charlie’s soul. They’ll take a piece of your soul, too.”

It’s a heavy batch of songs to take in. Boris Records co-owner Scott DePlonty describes them as “genuine and honest. The band wasn’t trying to ape the landmark records of the genre, but incorporated that history and wrote these songs from a place of passion and personal expression.”

Eric Musall, who owns Unspeakable Axe, says, “I love that [the album] exists. Motherfuckers took their sweet time. But it was worth the wait.”

When asked about the album’s title track, which premiered May 1 via DecibelMagazine.com, he adds, “It sanded my face off from the first listen, and I was glad the band wanted to do it as the lead-off single.”
As a result, Sadistic Ritual has crafted an untouchable first album for the metal world, driven by punk awareness, and a worldview that’s burdened by the depravity of mankind. Constrictive guitar solos and searing leads in songs such as "Mutually Assured Destruction" and the tangled maze of “Cerebral Sacrifice” loom on the horizon like a mushroom cloud, laying waste to everything in sight.

“Death as the focus of this album is kind of a reminder that we’re only given one chance,” says Sweat, who joined Sadistic Ritual in 2017, after spending years playing in indie rock band Big Jesus and fellow Atlanta metal bands Mangled and Order of the Owl. “Why live a mundane life? We made our best effort to take this somewhere.”

It’s a sentiment that Southern pushes further, adding: “A lot of people — normal people — hear the name Sadistic Ritual, and immediately think ‘Satanic Ritual.’ But we're not a Satanic band. Sadistic Ritual is a ritual of death,” he says. “Like the mound of skulls that were photographed for the album’s cover, this album is a monument to death.”

The blazing pyramid of animal skulls, bones, and antlers was culled together on the outskirts of rural Memphis, Tennessee, by longtime cohort Seth Decay, who fronts the black metal group Ritual Decay. “We had an idea of what we wanted, so we called Seth, ’cause he's one of the most evil people I've ever met in my life,” Southern says, with a laugh. “We knew he could help.” 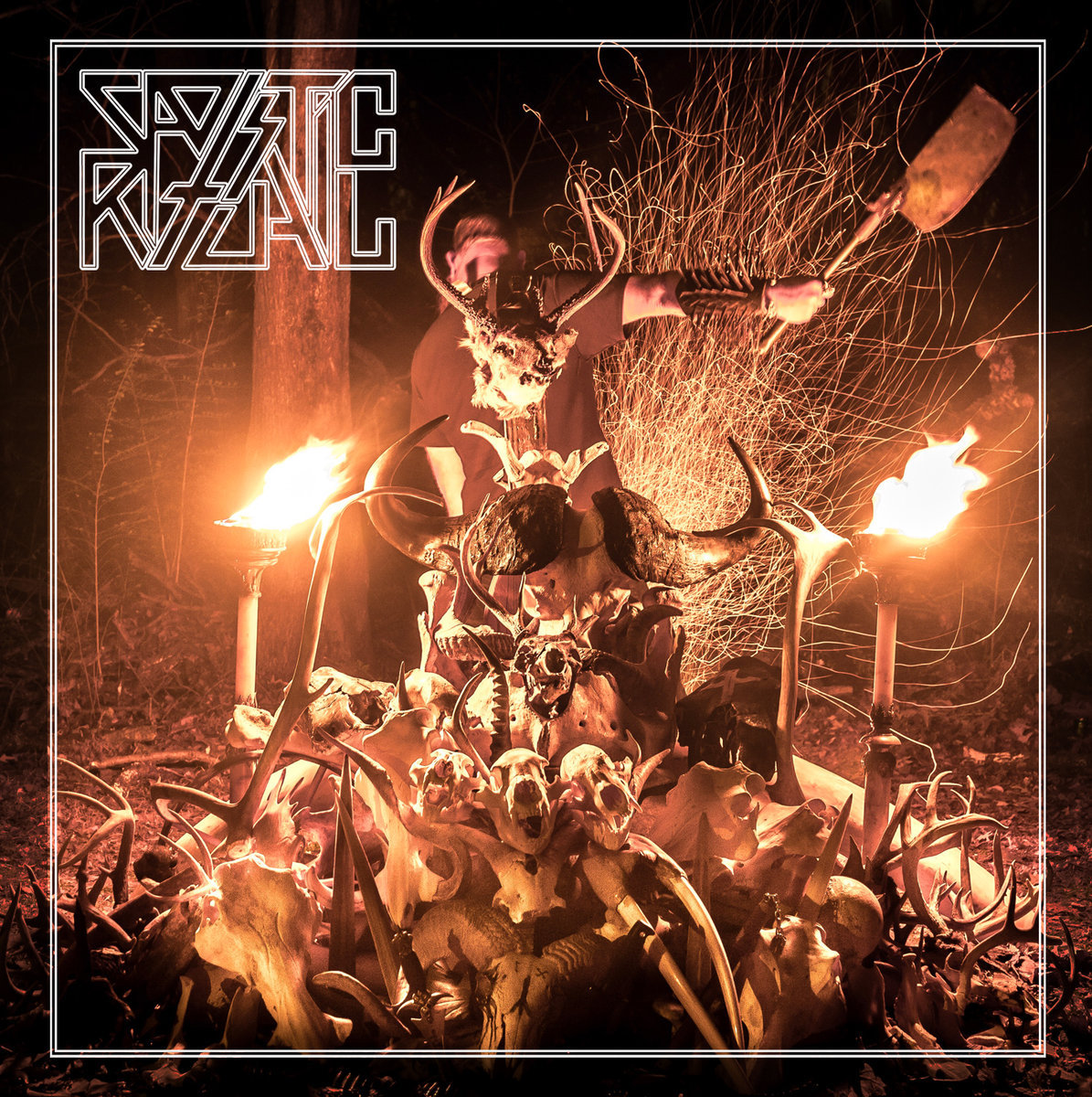 
The image, backlit by the glow of two fiery torches, was captured by Atlanta photographer David Parham. It’s a striking and hallucinatory counterpart to Sadistic Ritual’s musical vision, with implications that reach far beyond the covers of early Sadistic Ritual singles and demos adorned with juvenile drawings of blood-splattered violence.

“I wanted to take everything that I learned from being in Big Jesus, which was a huge milestone for me, and channel it into this group,” Sweat says. “I knew we couldn’t have just any piece of artwork. I wanted something real, something that says, ‘This is not a joke. Do you want to talk about something real? We’re not out-to-lunch people. We take ourselves seriously, and we take our music seriously.’”

As such, the group has emerged as one of the most electrifying, challenging, and ultimately rewarding metal bands in Atlanta. But even using words such as “metal” and “thrash,” which have marked Sadistic Ritual from the beginning, feel misguided in light of just how far the group has come with its debut album. When talking about their influences, both Sweat and Southern drop the names Slayer, Megadeth, Iron Maiden, and Motörhead. They also offer no apologies for the group’s brutal vitality, nor for the intense and menacing bombast that defines Visionaire of Death.

“I don't want to hear a love song,” Sweat says. “I want to hear something about how insane the world has gone, how insane it is that anyone even exists. I can't relate to RPG metal, or over-the-top occultism — don’t get me wrong, I love the occult. But we’re Americans. We want to play something that’s actually fucking good, something that has some bite, something with fire, and the attitude to back it up.”