MY BODY, MY VOICE: Georgia’s returning to the dark ages is not a bright move

The move means women, LGBTQT folks, and people of color end up on the chopping block

Picture this: The day was May 7, 2019, minutes before Gov. Brian Kemp signed House Bill 481, Georgia’s six-week abortion ban, into law. The media ran images of Rep. Ed Setzler, who sponsored the bill, celebrating his accomplishment by fist bumping with Sen. Bruce Thomson. That’s how the last legislative session ended — with two men celebrating their victory after stripping Georgia women of their constitutional rights.

But that’s not how the last legislative session started. No, the last legislative session began with a bipartisan effort to ratify the Equal Rights Amendment (ERA) to the U.S. Constitution, which would provide equal legal rights to all Americans regardless of their sex. It states simply, “Equality of rights under the law shall not be denied or abridged by the United States or by any State on account of sex.” Pretty straightforward. But it still isn’t the law of the land. You see, the U.S. Congress first passed the ERA in the 1970s, but it didn’t get enough support from states at the time. Thirty-eight states need to approve the amendment in order for it to be added to the U.S. Constitution. Fast forward nearly 50 years, and Illinois became the 37th state to ratify the ERA in 2018. Just one state away! And that’s where Georgia came in. With bipartisan support and two separate resolutions urging the state to sign on, things looked promising.

And reverse course they did. A complete 180. Instead of ratifying women’s rights, they decided to attack them instead. Sen. Renee Unterman, who initially introduced one of the resolutions to ratify the ERA, later carried the six-week abortion ban in the Senate. And ultimately, we ended session with the above-described smug fist bump, and onlookers who began the 2019 legislative session with an optimistic outlook were left with a bad case of legislative whiplash.

Which brings us to today. The 2020 legislative session kicked off on Monday, January 13, and it began just as our most menacing legislation often does: under the cover of darkness. Just as lawmakers, their families, lobbyists, and citizens gathered ’round to hear Gov. Brian Kemp speak, the power went out (an appropriate introduction, if you ask me). But eventually, power was restored, and the Gold Dome was again abuzz with people speculating what this year’s session has in store.

This is an election year, so many folks — including Brian Kemp — are predicting a relatively uneventful three months so that lawmakers can end the session quickly and quietly and get back to campaigning. However, those same lawmakers will also be vying for voters’ attention and looking for creative ways to get their names in the papers. In Georgia, that often means that women, LGBTQ+ folks, and people of color end up on the chopping block.

There are a few pieces of legislation that are already in the works or working their way through the rumor mill. The legislative committee studying Georgia’s maternal mortality rates (which are the highest in the country) has recommended that legislators extend Medicaid coverage for low-income mothers to one year following birth. This would be a big improvement (and is something Rep. Renitta Shannon introduced last year)  but Georgia has repeatedly refused to expand Medicaid — regardless of how many lives it would save — so I’m not holding my breath.

There is also speculation that the Religious Freedom Restoration Act (RFRA) will rear its ugly head again, buried within a foster care reform bill. For those who aren’t familiar with RFRA, it was expanded in 2014 to give businesses and government agencies license to discriminate against LGBTQ+ people on the basis of religion. A similar bill was introduced in Georgia back in 2016, received overwhelming opposition from Georgia citizens and the business community, and was ultimately vetoed by Gov. Nathan Deal. With Brian Kemp in the Governor’s mansion, we can’t count on that veto anymore.

Perhaps most notable are the sweeping budget cuts requested by Gov. Kemp following recent tax cuts. Kemp has asked lawmakers to reduce spending by 4 percent this year and 6 percent next year to make up for the fact that tax collections have lagged since lawmakers cut the top income tax rate from 6 percent to 5.75 percent, thereby reducing state revenues by $450 million per year. Meanwhile, the law outlining the initial tax cuts also allows the state to pass yet another tax cut this session, something the Georgia Budget and Policy Institute (GBPI) warns would be “a real fiscal crisis for the state.” But such cuts could amount to more than a fiscal crisis — they could also be a PR crisis for lawmakers. According to a new poll from GBPI, 78.3 percent of Georgians oppose or strongly oppose budget cuts if they touch on public safety, health care, and education, and 68.1 percent oppose cuts that involve layoffs. Each of which is a very real probability. Public services are almost always the first thing to go to accommodate tax cuts for the wealthiest among us. It’s not all bad, though — there is at least one line item in the state budget that could be cut to save money and improve people’s lives. Georgia could stop funding fake women’s health clinics, which exist for the sole purpose of misleading women about their reproductive healthcare options to block them from accessing abortions. According to data from the Georgia Department of Public Health, 16 of these clinics have received or will receive at least $6.7 million in state funds before June 2020. Just think of what we could do with an extra $6.7 million if we weren’t using it to pay con artists parading around in scrubs to lie to Georgia women.

Last but not least, the so-called “trigger bill” so fiercely debated during the last legislative session is still in play this session. The explicit goal of this bill is to immediately ban all abortions in the state if and when Roe v. Wade is overturned … and overturning Roe is the explicit goal of Georgia’s six-week abortion ban and every other abortion ban passed last year. Make no mistake: These anti-abortion groups and lawmakers will not be satisfied until abortion is outlawed outright, and they see this as their opportunity.

So when people say, “Oh don’t worry — it’ll be a quiet session!” I think about the last session and every session before that. I also think about the recent reassurances we heard when Kemp appointed Kelly Loeffler to the U.S. Senate. Folks said, “She’s a woman! This is Kemp’s attempt to moderate! She’s a business woman, not an extremist!” In her first week in office, Loeffler cosponsored three anti-abortion bills. Not only is she an anti-abortion extremist, she is one of the most industrious we’ve ever seen, and she fits right in with our state lawmakers and their rabid urge to target women, LGBTQ+ folks, and people of color. So I am bracing myself for an ugly legislative session, just like I do every year. I suggest you do the same. — CL—

Want to get involved this legislative session? Join us at the Gold Dome! Sign up here. 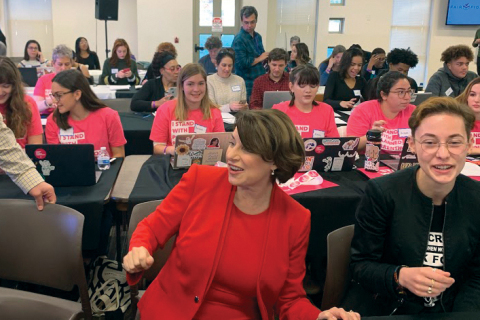 MY BODY, MY VOICE: We don’t need a big tent to accommodate this ‘pro-life’ circus Article

MY BODY, MY VOICE: You need more than a uterus to be an advocate for women Article

And you don’t need a weatherman to know which way the wind blows | more... 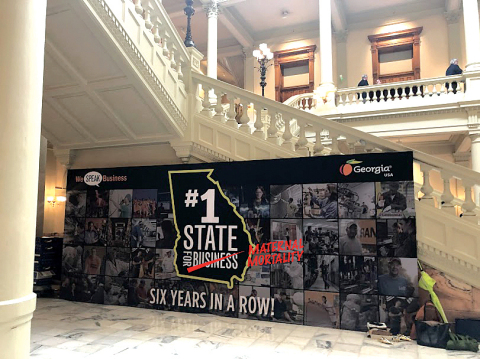 MY BODY, MY VOICE: Pregnancy is often a death sentence in Georgia Article

MY BODY, MY VOICE: This Was Never About Abortion Article

Women will not go unheard | more...
Search for more by BARBARA ANN LUTTRELL