The once avid cyclist gets by with help from his friends 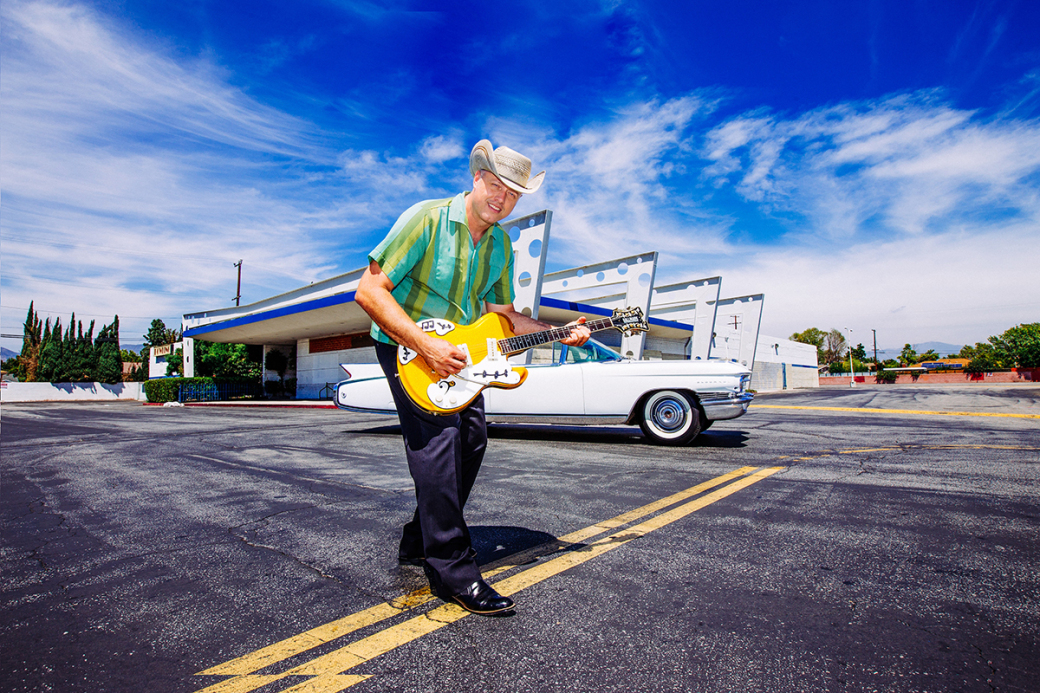 Photo credit: SUSIE DELANEY
FRIENDS HELP FRIENDS: Deke Dickerson cruises into town for a special show at the Star Community Bar Feb. 25, aided and abetted by the local rag tag team the Beard-O-Fonics, with The Mystery Men?, and the Wheel Knockers also on the bill.
By James Kelly Thursday February 3, 2022 11:54 AM EST

It has been almost eight years since Decatur resident and avid cyclist Greg Germani was viciously run down in a bizarre and horrific road rage incident. Suffering a permanent traumatic brain injury, Germani continues to need 24-7 care and supervision, but has shown some progress in regaining his historically sharp cognitive skills and memory. What hasn’t changed are his physical limitations, and the ongoing need for financial support to provide for his in-home staff, therapy, and medications, as he is also a Type 1 diabetic.

The Atlanta music and cycling communities have been a great source of support for Germani, however the pandemic has curtailed a lot of the activities that previously occurred to raise funds for him. Thankfully, as more people seem to be getting out, despite the threat of the Omicron variant, some of the events are once again being scheduled to offer aid to Germani. The Star Bar in Little Five Points is hosting musical benefit for him Saturday, Feb. 25, featuring local acts the Wheel Knockers, the Mystery Men, and a special appearance by Germani’s California friend, Deke Dickerson.

Dickerson is a well-known musician who both champions the classic country/rockabilly/roots artists of the past, and updates those genres in his own unique and reverent manner. Germani used to frequent many of the popular roots music festivals across America, including “Viva Las Vegas” and the “Rockin’ 50s Fest” in Green Bay, where Dickerson regularly performed. Crossing paths in so many different places around the country, the two struck up a friendship.

In a recent interview, Dickerson discusses how he met Germani, and how their musical tastes are so intertwined. “Oh, I’ve known Greg forever! We originally met each other at various music events across the country. Back then, when you saw the same person at three to four different festivals in different parts of the country, you’d walk up to them and say, ‘Okay, who are YOU, because I think we need to be friends!’ Then I started coming to Atlanta and playing, and my band would always stay at his house.”

Anyone who has ever visited Germani’s home knows exactly where his interests lie. From framed pictures of classic country artists and little person wrestlers, to a massive collection of obscure albums and 45s, and his vintage 50’s furniture, his tastes are obvious. His affinities parallel Dickerson’s love of all things retro, particularly the music. Dickerson notes, “When you stumble across this incredible music, I know that myself and people like Greg simply can’t believe that more people don’t know about it. And when you find something that gives you that much joy, you just want to invite other people to the party, know what I’m saying? There are a lot of us weirdos who get our kicks from vintage music that could be called ‘criminally obscure,’ so getting that music out there and getting other people to tune into your wavelength is a bit of a crusade for people like us.” Germani’s past DJ gigs, his show bookings, and fantastic mix CDs (the best in town!) reflect a similar sense of commitment in spreading the word about the special things he loves. While his ability to organize such events has diminished, his memory and ability to recall and reference information from the past is still impressive.

Rather than grieve his fate, Germani maintains a very positive attitude about life, and maintains good friendships with many people. Although frequent visits have decreased due to the pandemic and Germani’s health concerns, he is always appreciative of those who drop by and hang out on the patio, when weather permits. But the struggle for financial support continues. Even with some government funding, Germani’s required level of care is immense. The original GoFundMe site is still active, and donations can be made at www.gofundme.com/f/greg-germani-give-for-greg .

In a country where there is so much wealth, it is shameful that people like Germani are in such a financial bind. Dickerson has not hesitated to join in on past and the upcoming fundraisers. “Greg is the sort of guy who would do anything for you. I’ve brought this up before when asked, (he’s) just a completely selfless guy. So when something this awful happens to a person like Greg, I don’t even hesitate. I’ve done a few of these for Greg and I’m happy to do as many more as I can. I think everybody feels that way about Greg.”

Discussing the bigger picture, Dickerson questions, “As for the state of healthcare in the USA, boy, where do I start? I’ve been all over the world, and ours is the only country that doesn’t take care of its own people. It’s unimaginable, especially for a nation as rich as the United States is. All over the world, they think we are absolutely crazy, to have people arguing ‘against’ health care. All it takes is one traumatic event, like what Greg went through, to discover how vulnerable we all are — at risk of losing everything with no fault of our own.” Many of us wait for the day when we don’t have to do benefits, fundraisers, or make donations in order to help people with medical needs. But until then, we will.

Joining Dickerson on stage at the Star Bar will be a local pick-up band, consisting of several roots oriented musicians who regularly play at the venue. Asked how he whips them into shape for the show, he says, “Basically I take them to a local sauna and we sit around wearing the towels and drink a Finnish drink called Fisu, which is a highly mentholated drink made from Vodka and dissolved Fisherman’s Friend cough drops. Then, I give them a heart to heart talk about the sacred privilege it is to entertain people, and how we have a responsibility to leave people feeling like they have seen a proper SHOW. They listen to me, and they understand the responsibility. The only thing I can’t get these boys to do is shave, which is why I’ve nicknamed this lineup of the band “The Beard-O-Fonics.”

Music has been a continuous source of comfort for Germani, along with the support and love of his friends and family. Dickerson sums things up in a somewhat nihilistic but optimistic way. “In these post-pandemic times we honestly don’t know how many good times we have left! Come out and celebrate and have a good time. I know that when everything abruptly ‘stopped’ for live music in March 2020, it’s been so traumatic, that I told myself when I get the opportunity again to have fun and play live music again, I wouldn’t take it for granted. Come on out and party with us!” And party we will, safely of course, for Greg Germani.