Better Than The Truth - A Solo Exhibit by R.C. Hagans II

What- "Better Than The Truth" a radical multi-disciplinary art show in Atlanta, GA

Artist RC Hagans II and Blue Mark Studios would like to invite you to the opening of "Better Than The Truth" on 7-7-17 at 7 pm. This will be Hagans' first event in Atlanta.

RC Hagans is an anomaly, a contradiction. Inspired by religion, punk rock, guilted fine art, and vandalism, Hagans creates work that blurs the line between reverence and blasphemy.

RC has been drawing since he was born and fighting since not long after. It might be difficult for the outside observer to understand how the same hands that have painted over 1,000 portraits could have competed in the same number of wrestling matches, cage fights, and Juijitsu tournaments; but Hagans will explain how they are one in the same and each informs the other (before inviting you to take an introductory grappling class with his coach).

Growing up Hagans spent his time traveling with his missionary father and making friends in the slums of central and South America. Seeing the toys, hand made out of garbage left a lasting impact on Hagans and his collection of action figures. He still uses Mexican bottle caps and old coat hangers in many of his sculptures and frames.

Over the past few years RC has created work all over the country including a 5,600sqft colaboration with legendary rock and roll photographer Danny Clinch for the entrance to the Bonnaroo music festival, installations at fashion designer Billy Reid's compound, large scale mural on the Asbury Park NJ board walk, an ongoing series of works and adventures (including a functioning folk art pirate ship and the world's first drive through art gallery) with the infamous Butch Anthony, restaurant design, retail pop up shop, etc. etc. etc...(The guy gets around).

Better Than The truth is Hagans newest and best work. Portraits from the present, future, past, and parallel times leave the viewer with seeds of knowledge that hopefully grow and blossom into new ideas and perspectives giving a more esoteric view of the world. His series of bejeweled baseball bats called "Reset Baton: instruments of change" make the audience think of mad max, the Vatican, and the ancient ceremonies of Machu Picchu all at the same time.

The opening at Blue Mark is open to all and will be an experience unlike any you've had in this dimension. Doors open at 7, but with free art for the first 50 in line, you might want to arrive. Over 100 pieces will be on display with prices ranging from $5 - $15,000 so everyone can take a part of the movement home. The event lasts until 10, with a live painting at 9 (afterparty location TBA) Libations provided by PBR ATL. For those of you who can't make it on the 7th, the work will be on display until august 12.

More info can be found on rchagans.com on instagram @dickcecil or on the RC Hagans Facebook fan page. 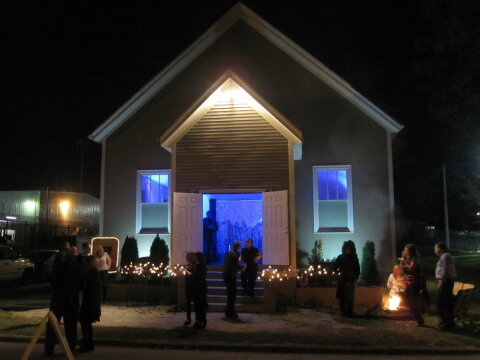