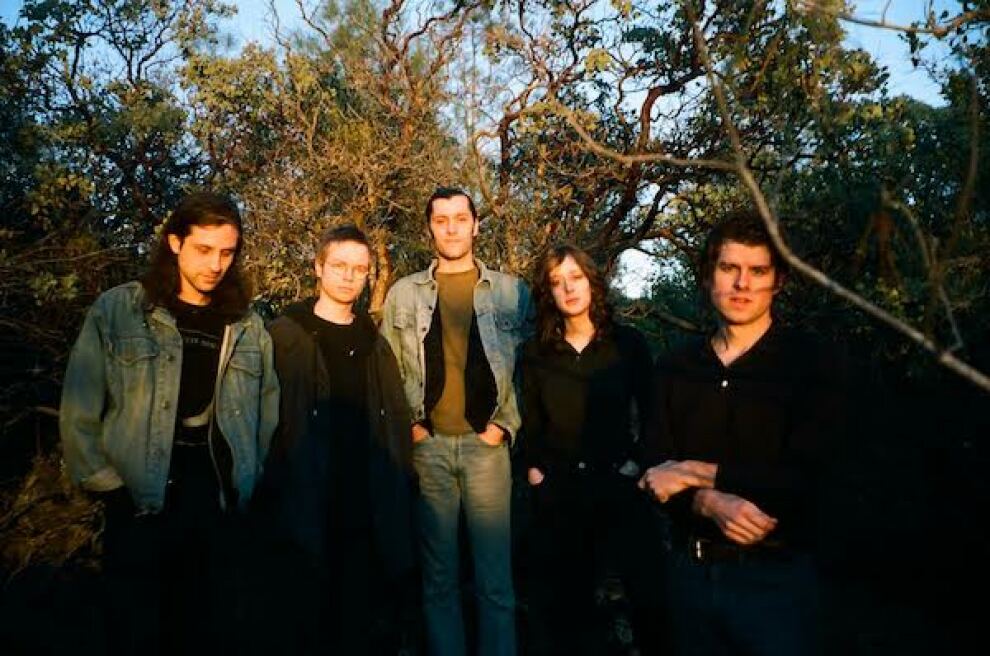 Wand formed in late 2013 in Los Angeles, CA and got right to work playing, writing, and conceptualizing a contrarian path forward -"the only viable trail to follow for a rock band that formed in the twenty-teens (and audaciously named itself Wand). The original configuration of the band was Cory Hanson (guitar, vocals), Lee Landey (bass), Evan Burrows (drums) and Daniel Martens (guitar). This was the group that recorded the neuroplastic, dusk-colored Ganglion Reef. Upon hearing it, the suits at GOD? Records demanded the opportunity to release it, and the rest became irrevocable historical fact in 2014. That debut release launched a year of furious activity and near-constant touring, and included the recording and release of both their second and third albums: the strobing sledgehammer Golem (on In the Red), and the psilocybe flicker show 1000 Days (on Drag City). During this time, Daniel left to focus on raising his son, and the remaining three members of Wand regrouped as a trio, with an auxiliary fourth piece for tours.Following a dizzying 100+ dates played in North America and Europe in support of 1000 Days, Wand took a six-month deep breath at the beginning of 2016. Cory put together a string laden solo album, The Unknown Capitalist From Limbo (released later that year), and Evan focused on writing and touring with his band Behavior. Meanwhile, Wand's barely-perceptible pause had a deeper agenda -"Evan, Lee and Cory had sensed the need for a new alignment, a fabulous new mutation of the body Wand. Sofia Arreguin and Robbie Cody were recruited to play keyboards and guitar respectively, with the intention of reimagining the band's approach to writing and performance. A period of intense woodshedding ensued, both in the practice space and on stages around the world, out of which the records Plum and "Perfume" emerged.The writing process that evolved during the tumultuous seasons of Plum and "Perfume" incorporated a new emphasis on econo-jamming and democratic decision-making; another new method of invention, another new mode of digestion. Plum dropped in the fall of 2017, "Perfume" in the spring of 2018. With the success of this music, the band forged on with confidence, stockpiling dozens of pieces and working them together as a unit. They made the most of their 2018, taking in deep bubbles of time to tinker and experiment with their sound, using several different spaces as well as their own home studio, and patiently uncovering the exciting alchemical balance that would bring all this work together as a whole. By the turn of autumn, Wand had arrived at the width and breadth, the breathless wit of their new album -"Laughing Matter.Cory and Evan opted to write all of the lyrics on Laughing Matter collaboratively. The lyrical and musical shades vary between Wand's darkest nights, and most pastoral days. There's a matured, diverse emotional scope on Laughing Matter that has not been so naked on any Wand record before it. This is a record that takes every turn, feels every thought, eagerly attempts to break every convention, and joyously recombines the familiar territory. This is a record with love as a center. With friendship -"especially its most difficult, dysfunctional forms -"as foundation. And with music -"the dedicated jamming of five autodidact musicians -"as its guiding principle.Laughing Matter was recorded by Enrique Tena Padilla, assisted by Zac Hernandez at Sonic Ranch, West Texas. It was mixed by Wand and Enrique Tena Padilla. Three members of the band sing on the record. It lasts one hour, seven minutes and thirty-seven seconds across two vinyl discs, one compact disc, one cassette, or continuous digital stream.This is a headphone record. A hi-fi record, against all common sense. A double record, but the songs are sweet. Each one tries to hold a small idea. We all put our hands on the wheel, then took turns letting go. And where you believe, you see. Or are you losing the shape? The user escapes from the toolkit for ease. We knew how to do it through practice. And we had plenty of help. We drank a lot of alcohol and caffeine. We worked all night, talked a lot of shit, and tried to impel the old dream. And could we be called away? What could we really hold in common? We all put our hands on the wheel, and we steered the machine.
More information