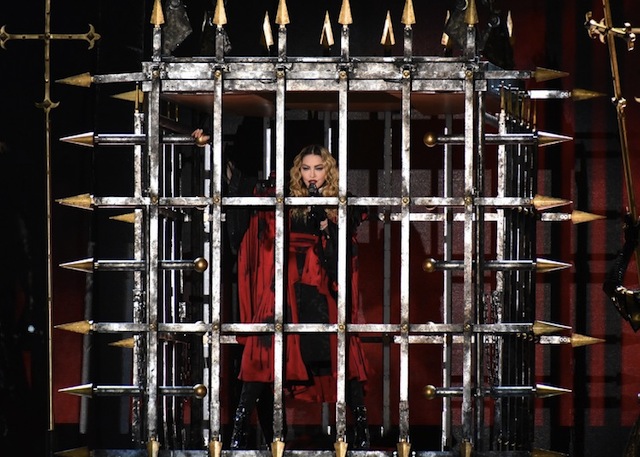 For more than 30 years, Madonna has been known to change up her style of music, dress, video, and overall creative direction whenever she damn well pleases. But on Jan. 20, during the Philips Arena stop on her Rebel Heart Tour, there was another familiar theme that she's implemented for some time now: A late start. Like everything else, the 57-year old entertainer shows up whenever she damn well pleases.

A Madonna concert starting on “CP Time” (“creative peoples time”) has become so commonplace that half the sold-out crowd didn’t bother showing up till 10:30 p.m., even though the doors opened at 7 p.m. No matter, everyone was greeted with the same Jumbotron message: “Due to circumstances beyond our control the performance will not start until 10:45.” The sign also presented another reality check for some concert goers: "The last MARTA train leaving Dome/GWCC/Phillips Arena/CNN station would be pulling off at 1:15 a.m."

EDM performer/DJ Lunice opened the show, and kept the crowd entertained (i.e. distracted from the “circumstances” sign). But he only played till 10 p.m. leaving the stage shouting: “ARE YOU READY FOR MADONNA!?!?” But what followed was an awkward silence filling the arena leaving the crowd to (*gasp*) actually talk among themselves until the lady of the hour showed up. People who were teenagers when Like A Virgin dropped (1984) were heard saying it was past their bedtime, while people who probably lost their virginity when Bedtime Stories came out (1994) were calling home to check on their kids.

10:45 p.m. showed up on time, but Madonna did not. By this time there were small sections of people trying to crank up “please start the show” chants. Sensing that the crowd was getting antsy, the soundman picked the perfect song: Michael Jackson’s "Wanna Be Startin' Somethin'."

She opened the show in grand fashion with songs from Rebel Heart. Her dancers marched out as futuristic samurais to “Iconic” featuring Chance the Rapper and Mike Tyson, as video of the two absent guests played on the stage screen. She put the screen to use again for her Nicki Minaj-assisted single “Bitch, I’m Madonna” which almost came across as an answer for her tardiness. Always known for her mixing of visuals and cultures, Madonna blended two of Atlanta’s biggest exports, church and exotic dancers, for an arousingly blasphemous performance of “Holy Water” where she had dancers working stripper poles crowned with crucifixes. By the time she converted the stage into a gas station for “Body Shop,” she had the crowd eating out of the palm of her hand. Tardiness forgiven.

Throughout the show Madonna had fun toying with gender fluidity and picking and choosing from her extensive catalog. She had both male and female dancers go shirtless with each other on stage, and in bed for “S.E.X.” They salsa danced to “La Isla Bonita,” and played acoustic guitar for “Secret.” “I wrote this song in Atlanta with Dallas Austin,” she reminded the crowd. Around this time some of the audience also seemed to be reminded that they were indeed still in Atlanta, and that MARTA was about to stop running, so small lines began to file out to catch the last train.

With 13 albums released since 1983, there are bound to be a few forgotten moments brushed past. Even though she was in the Bible belt there was no “Papa Don’t Preach” or “Like A Prayer.” People wanting to live out the “Vogue” music video only got a few seconds worth during the part of “Holy Water” where she revisits the song. When it came time to perform “Material Girl,” Madonna covered her ears as if she was tired of hearing it. The outspoken star also took some moments to shoot the shit with the crowd, hint at getting married again (“I’ve sucked at marriage twice now”), and complain about how the lights on the tip of the penis-shaped stage blew out. Ironically, or perhaps by design, Madonna wound up closing the show with “Unapologetic Bitch” and walking off the stage, never acknowledging that she kept the crowd waiting for hours before she started the show. An unspoken apology came in the form of an encore performance of “Holiday” in which she ended by being hoisted up by strings and flying away into the darkness that is 1:15 a.m, leaving inspired concert-goers debating if they were themselves talented enough to show up to work the next morning late as hell and be greeted with admiration like Madonna. Good luck with that.

See a gallery of photos from the show.

Tonight, Jame$ spearheads a benefit for the families of the 147 victims of the Garissa University shootings | more...
Search for more by Maurice Garland
[Admin link: Madonna at Philips Arena: Better late than never]