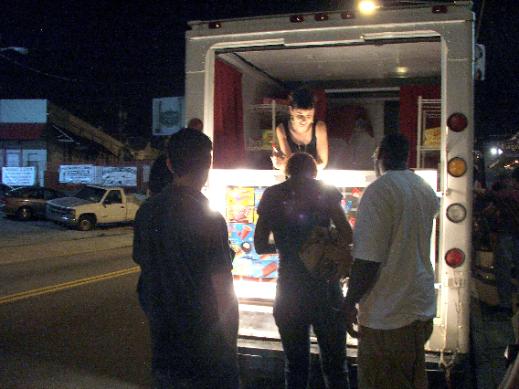 Photo credit:
They hoist themselves up on the back bumper of the 1988 Chevy T30, peering over the high backside, eyes glazed-over, gleaming at the goodies like little kids in a candy shop.

Then they dig into their pockets and surface with a couple of crumpled dollar bills - most likely leftovers from a paid-out tab - and ask in a sort of sad, begging way: "How much can I get for a dollar?"

It's 2 a.m. and these mid-twenty-something scenesters are in a candy shop of sorts, fully equipped with an assortment of concession stand snacks, imported goodies and frozen delights.

Bodega Nights, the newest addition to promoter Preston Craig's entourage, is Atlanta's only mobile convenience store and ice cream truck, catering exclusively to the after-hours club scene and the socialites that come with it.

The truck premiered at Graveyard Tavern June 16, and even though it's barely a month old, Craig's club goers have come to expect it at his gatherings.

So it was no surprise that Bodega Nights came back to Graveyard for the opening of his newest Friday night party, Eastern Bloc - a $5, three-club, multiple DJ block party spanning East Atlanta's Glenwood Ave.

But yeah, it's really an ice cream truck.