Killer Mike: Vincent Fort for mayor — Next up, me.

“Atlanta is in a very dire time right now,” says the Run The Jewels rapper 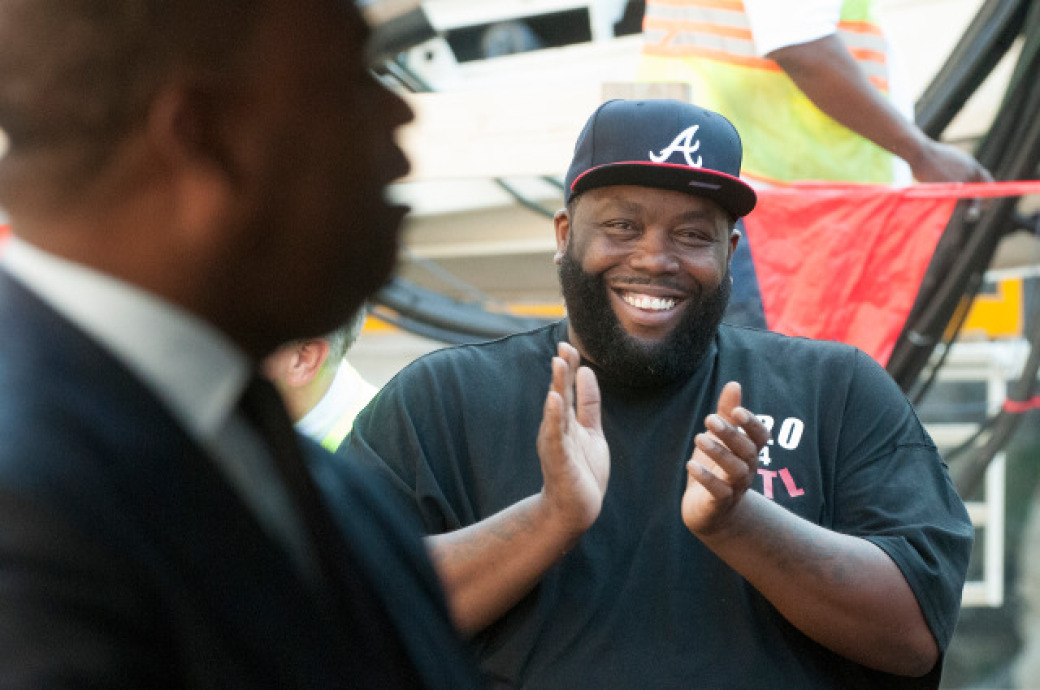 Photo credit: Joeff Davis/CL File
UP NEXT: Killer Mike has his eyes on a political career.
By Sean Keenan Friday October 13, 2017 01:55 pm EDT

Atlanta is in “a very dire time,” desperately in need of a new mayor to pull it up by its bootstraps, says Michael “Killer Mike” Render.

The Atlanta rapper isn’t spying a spot on the ballot just yet, but he says he’ll run once he bows out of the rap game some years from now. “Once I get a few more grey hairs,” he says. For now, he’s stumping for state Sen. Vincent Fort, Atlanta’s Bernie Sanders-esque mayoral candidate who claims “City Hall has lost its way.” Render — once again — pledged his support for Fort’s campaign at a Saturday afternoon rally on Sept. 30 where U.S. Sen. Bernie Sanders, too, came to sing the state lawmaker’s praises.

“I’m with the people,” Render tells Creative Loafing. “More than a candidate I want the set of principles. So ‘Fort or die’ means the set of principles that he has that I am dedicated to ... The principles that he shares are the ones shared by Sen. Sanders, and the ones that are shared by the people on my shirt (Martin Luther King Jr. and Hosea Williams, among other Civil Rights era icons).”

So if the hyper-progressive Fort drops from the crowded race — that’s not going to happen — “I would find those principles and support that [candidate],” he continues. Render, like Fort and Sanders, wants to see broad-sweeping criminal justice reform, income inequality dampened, and weed laws relaxed, among other things. Fort says he has the tools to do just that.

“A child born in Grady Hospital this afternoon has the least chance of any place in this country of moving from poverty to the middle class.” A 4 percent chance that is, Fort says. “They are, in effect, imprisoned by their zip code.”

Finding an antidote for Atlanta’s income inequality and immobility crisis has for years been a fervent pursuit for the Georgia senator. He’s also been a staunch opponent of predatory lending since long before the Great Recession spotlighted the practice. He and then-Gov. Roy Barnes teamed up in the late '90s and early 2000s to pass legislation to combat such methods, although Republican lawmakers have since repealed most their bill’s substance.

Now, Fort says, his campaign competitors have begun parroting his policy aspirations. “Now, [other candidates] are talking like Sen. Fort; they talk about income inequality and about income immobility,” he says. “That even talk about the tale of two cities, but the reality is, they were at City Hall when those two cities were created.”

The "two cities" he mentions are a metaphor for the economic and cultural disparity between the affluent likes of Buckhead dwellers and the misfortune of southwest Atlantans threatened by the implications of mammoth developments, such as stadiums and posh mixed-use builds.

“Atlanta is in a very dire time right now,” Render says. The driving force for change, he adds, must address the plight of young, marginalized Atlantans who’ve been afflicted by poverty, a school system scandal, and discrimination of all kinds. “I think that a working class kid of any color or denomination or sex should be able to ascending up the ladder in their community, becoming part of the middle class in that community and a part of affecting politics.”

Additionally, Render says, the city’s next leader needs to be equipped to challenge the bigwigs of the White House. “No matter if we have black politicians here, if they’re following a national idea of what being successful is, you just end up getting a microcosm of what it is you have nationally,” he says.

Sanders showed faith Saturday in Fort’s capacity to act as a thorn in the side of Washington's political elite. “This campaign is enormously important, not only for the people of this great city, but for the entire nation,” the former presidential candidate says. “We have a president who is trying to divide us up based on the color of our skin, our religion, our sexual orientation, or the country that we came from. Vincent Fort is about bringing us together,” Sanders says.