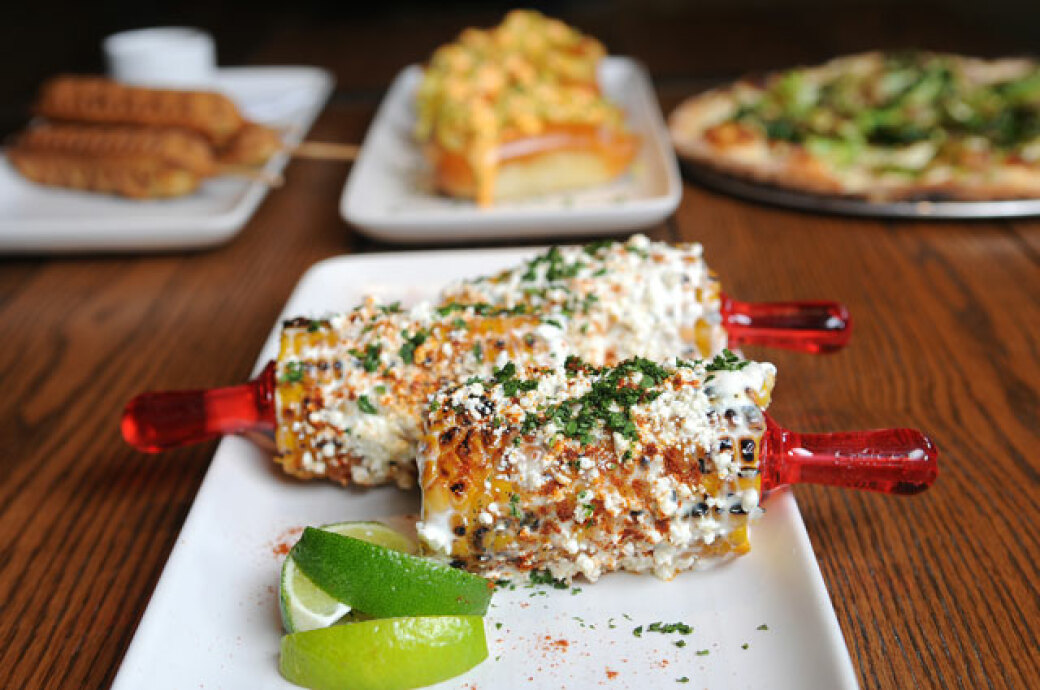 "It's a surprise. You'll see. You're going to love it," I told my friend Rose as we took Piedmont Road toward Buckhead for dinner. I'd decided not to tell her anything about our destination, because I doubted she — or anyone else I know — would be interested in dining amid the clatter of bowling balls careening down 20 glossy lanes in a gigantic room aglow with video screens.

The Painted Pin, self-described as "an upscale boutique bar, bowling and entertainment venue," is not as bad as I expected in most respects. In fact, its "modern English" design is flat-out luxurious. Perhaps you, like me, didn't know that bowling is no longer the déclassé province of Big Lewbowski-style blue-collar males. It now attracts white-collar women in numbers equal to men of similar background. Leagues, once the sport's bread and butter, have withered in popularity. These nouveau bowlers just want to knock back cocktails and knock down pins before they knock someone up. They also expect good food.

Owners Justin Amick and William Stallworth have not had an easy time opening the Painted Pin. Miami Circle is mainly populated by interior-design merchants who tried their best to block its opening, claiming that it would create parking havoc. It does nothing of the kind. The Pin is, speakeasy-like, located in a former warehouse with virtually no signage out front. You drive down an alley, hand your keys to a valet, and head for the door. It looks like literally nothing is going on. You see no cars. You hear no noise.

But swing open the big zinc door, which is flanked by gaslights, and the noise will hit you hard — even on a Monday night. Rose froze for a moment before regaining composure. Neither of us had been near a bowling alley in decades, much less one fit for "The Real Housewives of Buckhead." We stopped at the front desk to confirm it was OK to dine without bowling or playing any of the other games including bocce ball, Ping-Pong, table shuffleboard, and Skee-Ball. (There are no video games!)

We were told to sit anywhere we wanted. We wandered. All we saw were plush, upholstered chairs and sofas arranged around low tables. We weren't in the mood to eat sofa-style and finally found a small number of booths in the back.

I expected a larger, more interesting menu from Amick, who worked for seven years for Concentrics Restaurants, the business owned by his father, Bob Amick. Chef Thomas Collins worked in three Concentrics venues. The bar is overseen by mixologist Trip Sandifer, who is famous for his work at the Spence and Restaurant Eugene.

Our meal, despite everyone’s background at Concentrics, was amateurish. The menu is typically shareable small plates, sandwiches, salads, tacos, and wood-fired pizzas. We tried five dishes, avoiding the more predictable items like boiled peanuts, hummus, and fries. First was a trio of grocery-store-tasting “petite beef franks” in a fluffy, cross-hatched coating of malted waffle batter. Maybe the right topping could rescue the dogs from insipidity, but a smear of incoherent "sweet soy aioli" did not do it. We ordered a pizza scattered with a few crispy leaves of Brussels sprouts, some diced pancetta, a ricotta béchamel, pecorino, and garlic puree. The texture was almost comically leathery, the ingredients too sparse and too finely chopped to create more than a ripple of flavor before the jaw exhausted itself. I love me some warm, crunchy pork rinds. The Painted Pin’s menu describes theirs as “ranch and cheddar.” Don't expect melted cheese and ranch dressing on the side. Instead, the skins are dusted with something like ranch-flavored salt. We got no taste of cheddar whatsoever. Still, I could enjoy the skins thoroughly straight up with some real salt on the side.

The best dish was classic elote — Mexican corn that is grilled on the cob until charred. Then it's topped with crema, crumbled cotija cheese, and some chopped cilantro. Add a shot of lime and turn your teeth into a buzz saw reverberating with sweet, acidic, creamy, and crispy sensations. Second-best was a trio of fried oyster sliders that looked more like miniature po’boys. There were problems. The bread was too thick for the one or two tiny oysters in each slider. But a housemade chow-chow and some Sriracha mayo added a crispy, slightly sweet-sour piquancy that made the sliders tower over the table's bland-lands.

All of that said, I do think the two-month-old Pin's design — “modern English” — is fantastic. It was done by the elder Amick and Hospitality Woodworks. The architect was Jay George of WJG Design, Inc. Their obvious intention was to create an adult playground (no kids allowed kids are allowed Saturdays and Sundays until 5 p.m.). But why not add some less predictable and more playful options to the menu? The talented owners and chef are certainly more than capable of that. I'm betting on considerable improvement in the next few months.

??NOTE: This story has been updated since its original publication.

And a cheap fix you can buy right off the shelf | more...
Search for more by Cliff Bostock