After decades of wandering in the wilderness, our food scene is finding its way 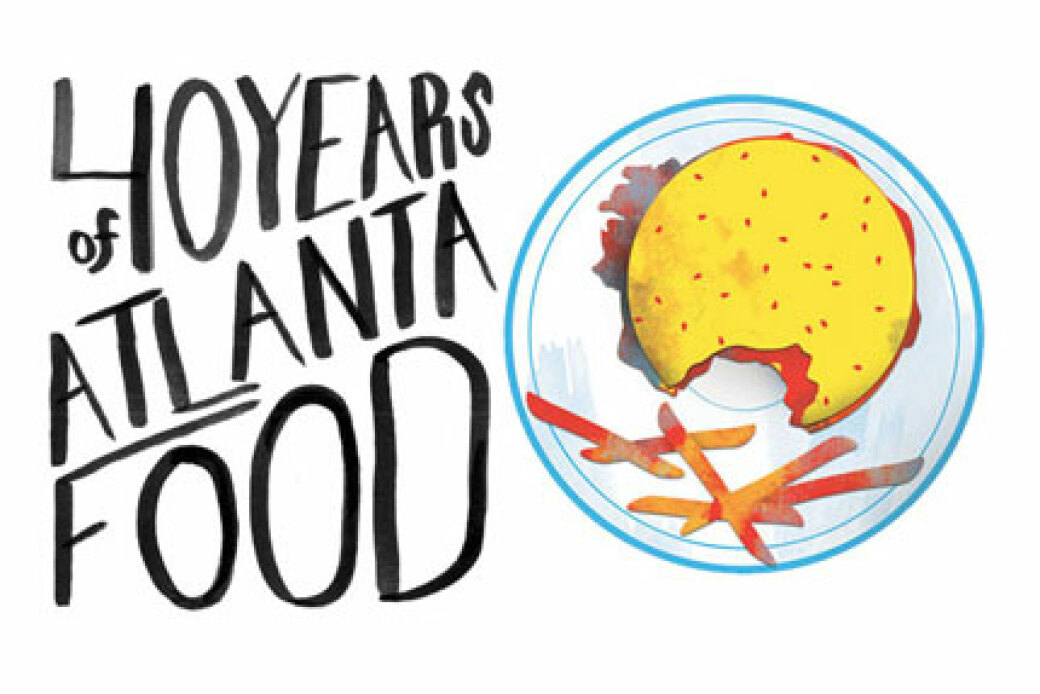 Forty years ago you could get a tender, flaky homemade biscuit to go with a fried chicken dinner at any number of meat and threes. Today, most casual dining restaurants use a boxed mix or frozen biscuits. Conversely, homemade biscuits are now made by culinary school–educated pastry chefs in Atlanta's finest restaurants and are served alongside heirloom, organic, stone-ground grits and pedigreed pastured poultry. Forty years ago Buford Highway was little more than a cow path, certainly not a dining destination for adventurous foodies and ethnic groups in search of exotic dishes like guinea pig tacos, tripe pho, or authentic Bangladeshi lamb korma. Forty years ago the finest restaurants in Atlanta included Nikolai's Roof, Chateau Fleur de Lis, and the Midnight Sun. Pleasant Peasant was the go-to place for ladies who lunch, and establishments like Pittypat's Porch and Dante's Down the Hatch were the "special occasion" places for visiting tourists, nervous prom-goers, and suburbanites celebrating anniversaries in the big city. Now, with a cadre of nationally recognized chefs and an explosion of choices, life is radically different. After 40 years of wandering in the culinary wilderness, Atlanta's food scene is finding its way.

For Atlanta, fine dining no longer means fancy or French, Californian or continental, and down-market dining doesn't have to involve a drive-through. From white linen formal to farm table to worn Formica, we've got world-class food in our city. And, it has as much to do with our long growing season and the farms located in nearby countryside as it does Buford Highway and the fact that Atlanta chefs are exposed to the entire world right at home. Hello, Hartsfield-Jackson. We're embracing Southern food — and understanding that what defines Southern food has changed and evolved. The food of Atlanta is equally catfish and churrasco, barbecue and bulgogi, cheese grits and curried goat.

There's a piece of Atlanta that is still the new kid on the proverbial chopping block. New York, San Francisco, and Chicago are the mature adults to our budding adolescent. Granted, pricey steakhouses still reign supreme in some circles and the country club set has the Cherokee Town and Country Club, rated one of the finest private clubs in the country. These more sedate culinary allegiances didn't allow for much wiggle room with a shaky economy and an indifferent affluent Atlanta that knocked out Seeger's and the Dining Room at the Ritz-Carlton, Buckhead in a one-two punch.

Instead, at the higher end of the market we now have the fine yet accessible restaurants Bacchanalia and Restaurant Eugene, smoothly moving in a perpetual dance to see who's the top dog in town. Yes, it's true at the other end we have an astonishing number of fast-food and chain restaurants per square mile, and the few meat and threes that still exist only offer a menu based on the canned good inventory list of the national food companies. There's a lot of good news in the very wide middle. We also have a wide array of fast casual restos where classically trained chefs have responded to the economic challenges by opening restaurants that offer lower price points and have a lower overhead. Food trucks are revving up their presence, too, with a thriving Midtown and food truck park off Howell Mill Road.

Things are better for the home cook, too. There is an abundance of avocational cooking classes offered in Atlanta and the surrounding suburbs. Need an odd kitchen gadget or cooking tool? The Cook's Warehouse, Williams-Sonoma, Sur la Table, and other retail stores have what you need. Star Provisions, Sawicki's, and the Spotted Trotter offer gourmet goods and artisan meats; H&F Bread Co. has some of the finest bread in the country. The Atlanta larder is far from bare, indeed, it's robust with ingredients.

One main reason is no different than what it was 40 years ago. It's agriculture. Georgia's agricultural industry plays a major role in the state's economy, annually contributing billions of dollars. Georgia ranks first in the United States in the production of chicken broilers, peanuts, and pecans. In 2000 the state ranked second in the country for the acreage of cotton and rye, third in production of peaches and tomatoes, and fifth in tobacco. Nearly 30 percent of the state — more than 10 millions acres — is farmland.

The South has an incredible growing season, and that has a lot to do with growing into our britches. There's something coming out of the earth 12 months out of the year. Much of it is commodity farming, but there are increasing numbers of people with urban gardens as well as small family farms offering their goods at local farmers markets. Farmers markets have improved. There's a farmers market somewhere in the city four out of seven days a week. There's something very full circle about more and more Atlantans returning to buying from small local farms and eschewing the supermarkets with their gases for ripening and fake rain for keeping the vegetables fresh. Thankfully, there's an awareness of food and cooking, eating and drinking that never existed in the past. Forty years later, the best of Atlanta is here and now.

Virginia Willis is a Southern chef, food writer, and author of Bon Appétit, Y'all (2008) and Basic to Brilliant, Y'all: 150 Refined Southern Recipes and Ways to Dress Them Up for Company (2011).