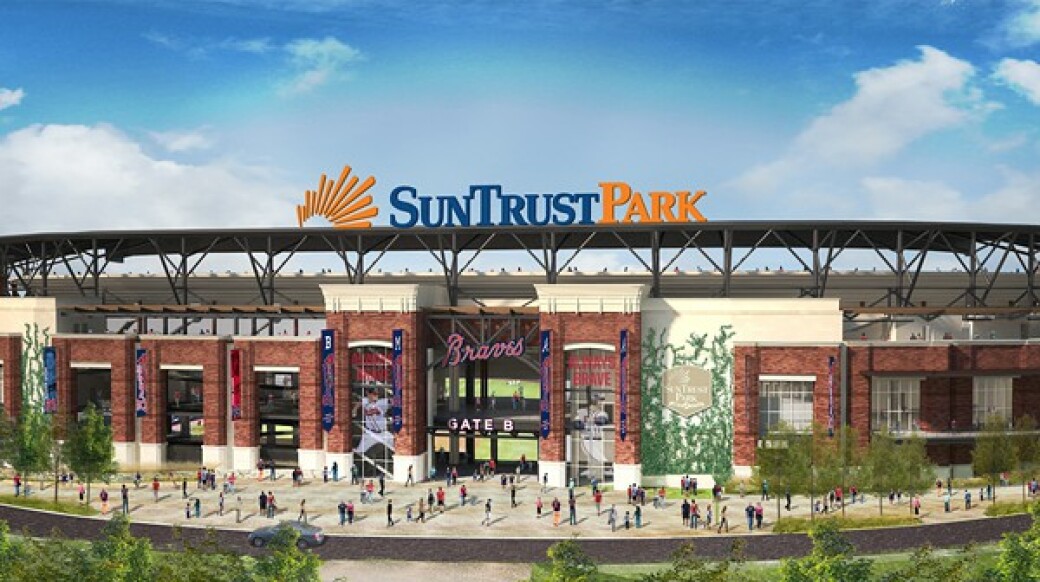 When the Atlanta Braves leave Turner Field in 2017, the team will head north to a shiny new stadium largely paid for by Cobb County residents. The Braves will leave the reference to former owner Ted Turner behind and name its new facility SunTrust Park.

At the groundbreaking ceremony this morning, Braves execs announced that SunTrust had purchased the naming rights for the new stadium for the next 25 years. As part of the longterm deal, the Atlanta-based bank has also purchased "additional signage and promotional opportunities" throughout the facility and adjacent mixed-used development. The financial terms of the agreement will not be made public, according to a team spokesperson.

Here's a few photos of what the entire thing will look like, complete with its corporate sponsorship:

Another look at #SunTrustPark, the new Home of the Braves in 2017! pic.twitter.com/QtTXqaRiBw
— SunTrust Park (@homeofthebraves) September 16, 2014

Despite being a publicly funded project, the Braves did not allow members of the public to attend the groundbreaking ceremony. There were no shortage of team execs, elected officials, and former players in attendance. Unsurprisingly, they all heaped praise upon the new stadium. Braves President John Schuerholz today said the new ballpark "embodies and celebrates the many elements that make our region so attractive to so many people." He also touted the future dining, offices, housing, entertainment, restaurants, and "plenty, plenty, plenty of parking spaces" as key elements of the project.

Gov. Nathan Deal said the stadium would generate tens of millions of dollars in revenue, employ 3,100 people, and become a "significant economic development tool for the state." Cobb Chairman Tim Lee, who helped rush the stadium deal through the public process, said that the stadium would "do for Cobb County what the first stadium did for Atlanta."

"They're not leaving Atlanta," Lee added. "They happen to be located in Cobb, but they're part of Atlanta."

You can see more renderings of the new stadium here.