Over the next year, MARTA will be moving forward to partner with private developers and start turning some of the transit agency’s parking lots into mixed-use developments. Brookhaven, King Memorial, and Avondale Estates stations have already been selected for the program aimed at increasing ridership and shoring up the transit agency's balance sheets. Also on the list: the Oakland City station in southwest Atlanta, on the edge of Fort McPherson and just a few stops shy of the world’s busiest airport.

On Dec. 11, a spread of finger sandwiches, slaws, and chicken wings greeted community members at the James Orange Recreation Center for a two-hour presentation on the current state of MARTA’s transit-oriented development aspirations in the neighborhood.

The Oakland City plan, which earlier that day was selected by MARTA staff as one of five to move forward in 2015, is the only TOD project south of I-20. The charette process, aimed at gathering opinions and developing ideas, was kicked off on Sept. 30, and followed by additional meetings in November. A viability report was created and a series of surveys conducted.

Last Thursday’s meeting was aimed at summarizing the process. The results of the survey were presented back to the community, along with an architect’s concept of what a final development, based on survey feedback and the report’s suggestions, might possibly look like.

According to Greg Floyd of MARTA, more than 100 people responded to the survey. Nearly one-third came from outside the neighborhoods considered to be within the “immediate study area.”

More than 80 percent of respondents identified the neighborhood’s greatest amenity gap to be its lack of a coffee shop. Desire for sit-down restaurants and grocery stores followed closely, at 77 percent and 67 percent, respectively. Respondents were clear in their support for new mixed-use developments, with 60 percent in favor. 42 percent support new single-family houses.

Oakland City was one of many neighborhoods in the 30310 ZIP code to be walloped in the early 2000s by an epidemic of mortgage fraud that has been characterized as among the worst in the nation. Properties acquired by mortgage fraudsters were abandoned and left to decay. Such decayed and dilapidated housing stock came up throughout the evening as the primary issue facing any revival of Oakland City. When officials reported that 32 percent of survey respondents described the condition of Oakland City housing stock as “good,” a woman sitting in the front row asked for clarification as to how “good” was defined.

Lela Randle, the president of the Oakland City Community Organization, agrees that the proposed development could help act as a catalyst for the neighborhood’s revival.

“It brings in new people,” she said. “But it also can help us as a community have more faith. We do have people in the neighborhood that have kind of lost hope. And there is hope, there’s plenty of beauty in the neighborhood — and so when you bring stuff like this in, it does help us, as residents and owners, to see the beauty.”

? ? ?
Scott Dupree, an artist who has lived within a mile of Oakland City since 2001, echoed that excitement.

“I think it looks great,” he said, referring to the architect’s renderings placed on easels after the presentation, which residents were encouraged to comment on with markers and “like” and “dislike” stickers. “I love the proposal — it’s in its first stage and they’re already, to me, doing something really good. With input from the rest of the community over the rest of the process I think they’re going to nail it.”

Not everyone was excited about the proposal.

“I like Decatur,” businesswoman Pamela “Ms. P” Hawes said. “It’s walker friendly. It’s just really nice to me. It makes you want to go back.”

The concept renderings presented to the community, however, made her think of “a prison. An institution.”

Hawes, however, is bullish about Oakland City’s future. “I’ve been in this community since ‘68. First black person on my street. I’m not going anywhere. Anyone who has property here needs to stay where they are.”

A report of the TOD planning process is now being prepared, and its contents will have to be adopted as an amendment to the Oakland City/Lakewood Livable Centers Initiative. That process requires an Neighborhood Plannig Unit vote and a public hearing in March or June before the amendment appears before the City Council. The MARTA property must be rezoned to allow mixed use development — a move that also requires legislation to appear before the NPU and Zoning Review board before heading to the City Council.

The MARTA Board must also authorize the release of the parcel where Oakland City’s southernmost parking lot currently sits, where Phase I of the development is planned. Requests for Qualifications (RFQ) and Requests for Proposals (RFP) will be released in the second or third quarter of 2015. 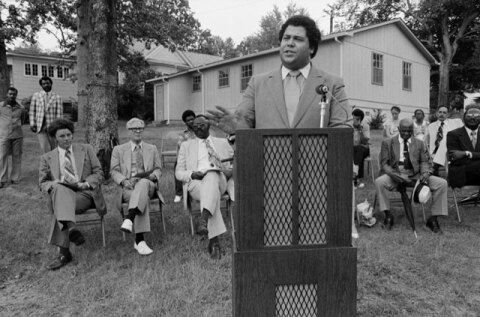 Maynard Jackson's innovative plan to give citizens a role in political process is 'broken but not dead' | more...

Nearly 70 people gathered at the DeKalb County courthouse steps last night to rally around the death of Kevin Davis, who died on New Year’s Eve, and to demand call for greater accountability from law enforcement officials across the state.

Davis was shot by Officer J.R. Pitts in the home...