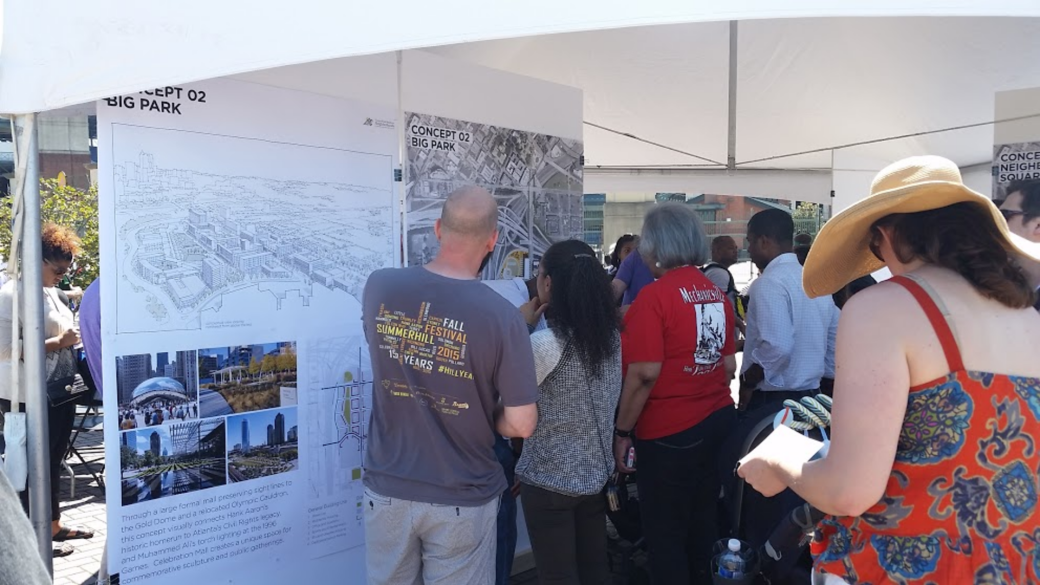 Atlantans who braved the hot sun during Atlanta Streets Alive also got a peek at three new visions for how Turner Field and its sea of parking lots should be redeveloped to connect to and serve the surrounding neighborhoods.

Perkins and Will, the design firm leading the Turner Field Stadium Neighborhoods Livable Centers Initiative, unveiled the visions at a tent pitched across the street from the entrance of the soon-to-be vacant baseball field.

Residents were invited to check out blown-up displays of each design concept — you can view them in photos below or in PDF form here — and cast a ballot for their favorite, along with additional comments. Members of the LCI team sporting purple t-shirts were on hand to boil down each plan for anyone interested. And almost everyone was.

P+W and residents kicked off the LCI process in December and held additional workshops in January. Georgia State University and developer Carter, two partners in the joint venture that’s in negotiations to purchase the mammoth property, participated in the process. Though the bidding process said the winning bidder should try to incorporate the LCI’s findings, it is not required to do so.

John Skach, a Perkins + Will senior associate and member of the LCI crew, said he and the team tried to balance the stakeholders’ needs and wants by folding together bits and pieces of Georgia State and Carter’s plans and residents’ feedback.

For example, the team asked community members where they think a new baseball diamond for the university — considered vital for the deal — should be located. The LCI team then pulled three possible spots to place the field.

Each vision calls for bringing back a street grid that existed decades ago before the interstate and later sports stadiums erased much of the area. In the project area, and in parts of Mechanicsville across the interstate, a mix of uses could be introduced, and in the process repair part of the city.

How that should all be arranged was presented in three different concepts.

Plan one, the Ballpark Plaza, proposes breaking down the area into two main public spaces. The central plaza is roughly 200 feet wide and integrates the concept of shared space (think parks with bike lanes and open-faced restaurants lining the edges all wrapped into one). The second plaza would be a scaled-down landscaped area containing a public square tribute to Hank Aaron and Georgia State’s baseball field.

Under the Big Park scenario, the retrofitted Turner Field and the new baseball stadium would sit at opposite ends of the urban tract with a large, open park connecting the fields. The park would use the old Fulton county stadium as the point of origin for sight lines back to the Gold Dome. Skach added this plan calls on a “civil rights narrative” because it connects Hank Aaron’s home run with the civil rights movement.

Neighborhood Squares, the final plan, switches up the idea of a megaproject by focusing on smaller scattered open spaces instead of one large space. The baseball park would shift closer to where it was planned in Plan 1, and link with the retrofitted Turner Field to become part of the sports core. This plan boils down each block to be more of an individual space. Skach said the idea was to build each square as markers of buildings’ historical pasts.

While each rendering can stand alone, all of the plans incorporate what Skach calls “programmatic elements,” meaning you’ll see Turner Field, a baseball stadium, a market hall, open space, mixed use developments and student housing across the board. Skach said the LCI team will take into account the feedback received during Atlanta Streets Alive on Sunday and make tweaks as necessary. The idea isn’t to simply pick one design and move on but rather to be platform for the community’s voice and focus on those wants.

Grant Park resident Keleigh Strudthoff said she didn’t see much of a difference in the different designs but was enthusiastic about scrapping the tacky parking lots in exchange for Georgia State sports facilities and storefronts to signal a new chapter for the area.

John VonHolle, who has been involved in the process, said after viewing the concepts his initial fears have been quelled.

“I think it’s complex,” VonHolle said. “There’s a lot of people that have very strong opinions and concerns that are very valid about what’s happening here. But I think they’ve done a good job of trying to bring that in. But I think these, from what I’ve heard about the concerns in the area and my own personal concerns, looks like they’re doing a good job to address those.”

For now though, Skach said, the team will start writing the plan report, penning recommendations (especially transportation recommendations), and focusing on the four neighborhoods touching the megaparcel that includes Turner Field.

Organizers will hold two more public meetings: a forum in May and an open house at the Fanplex in June that will showcase the final framework drawings, which will “close them the LCI out.”

“We’ve put a lot of effort into this and it’s been really fun for us,” Skach said. “We hope we’ve done a good thing for everyone here.”