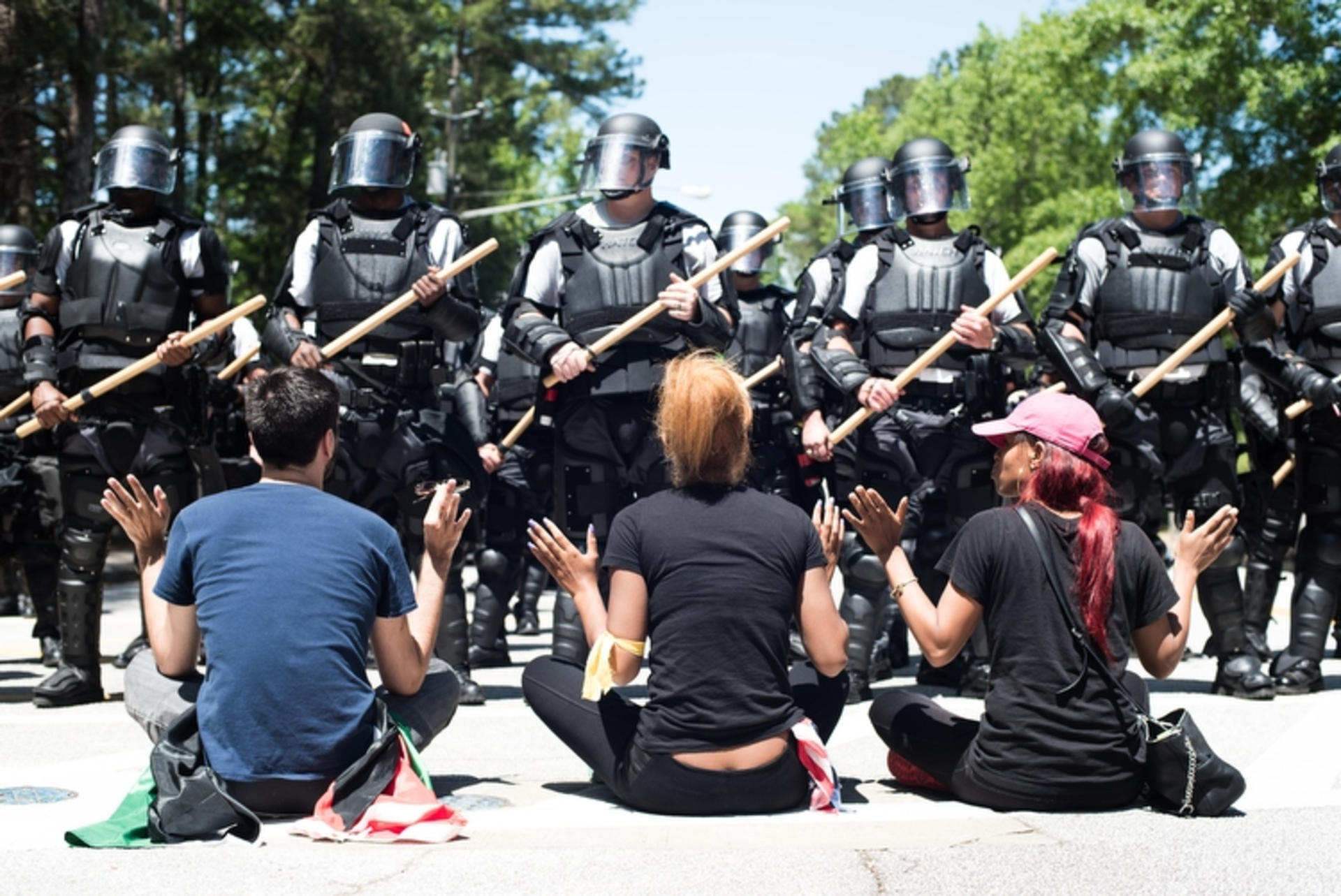 Two hundred officers in riot gear squared off with at least as many counter protesters at Stone Mountain who came to push back against a small gathering of white supremacists over the weekend.

Armed with wooden batons, face masks, and rifles — and later gas masks and tear gas launchers — they focused solely on keeping the counter protesters away from the white supremacists gathered at Stone Mountain.

There were nine confirmed arrests, mostly for violating Georgia’s anti-face mask law, with officers chasing down and tackling counter protesters covering their faces. However, hours in, people were getting targeted for more minor infractions as police struggled to keep the counter protesters from advancing toward the white supremacists.
One person was charged with aggravated assault because, according to Stone Mountain Police spokesman John Bankhead, “that individual threw a smoke bomb at a trooper.” There were also official reports of rocks being thrown and a barricade set on fire.


Two main groups led the opposition. Rise Up Georgia led a people of color-centered counter protest that involved blocking the park entrance by paying their entrance fee in pennies to prevent the white power protesters from entering the park. The group effectively blocked the park entrance for approximately 30 minutes.

Activists also chanted and sang as a way to display “a lot of black joy.”

“I love displaying black joy in the face of such hatred and racism,” said Aurelia, an affiliate of Rise Up Georgia and Black Lives Matter, who asked to be identified by only her first name over safety concerns. “And honestly that’s all we were doing. We weren’t antagonizing at all, like our presence is antagonizing enough, so like all we were doing is being black in the space.”

All Out ATL, the umbrella group that organized the counter protesters, chose more direct tactics to confront the Rock Stone Mountain group.

As police held their line keeping counter protesters out of the parking lot, one person kept asking the officers "who are you protecting?" while another shouted ‘you're defending the people who slaughtered my ancestors!’

“It’s a huge waste of money, and they are doing it to protect the white supremacists, you know, they aren’t really doing it to protect citizens or locals,” Hannah Hawkins, who came out with Atlanta Grandmothers for Peace, said about the heavy police presence.


Two people who came out for the Rock Stone Mountain event told CL they were merely wanted to protect the Confederate memorial carved into the mountain and preserve Confederate history.

“I am here because they want to take down the monuments, the Confederate monuments, from Stone Mountain and I’m against it,” said a man who declined to give his name.

The Rock Stone Mountain social media pages frequently linked to a racist blog post that claimed to be the mission statement for the group.