A sanctuary for holy humorists and P-word enthusiasts 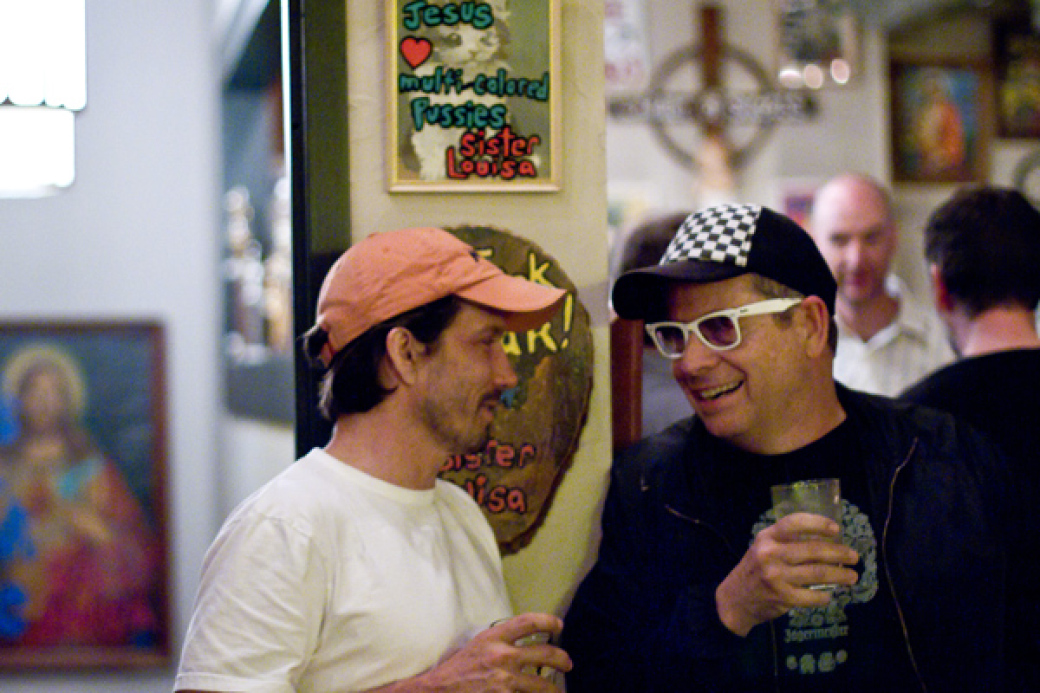 In the window, an illuminated Virgin Mary and a can of Pabst Blue Ribbon cast light over the crowds walking down Boulevard. A bouncer stands at a pulpit. A sign over the door beckons, "Come On In Precious!"

For those who believe organized religion is too exclusive a club, Sister Louisa's Church of the Living Room and Ping Pong Emporium is your sanctuary.

Owner Grant Henry was once a student of the bible pursuing a master's in divinity with a major in pastoral care. But days before his ordination he had second thoughts after being told he would have to state aloud that the only way to salvation was through Jesus Christ. Henry told his mentor that he couldn't reconcile that dogma with the people he knew. His mentor's response? "They're just words."

Years later, standing over the "tacky Jesus shit" he had acquired for his antiques store, Henry decided to put the words in his mind onto the devout paintings. He signed each one "Sister Louisa." The paintings were a hit (selling more than 60 at his first show) and the idea of a bar called Church was born.

Every inch of wall space at this bar in the heart of Old Fourth Ward is devoted to Sister Louisa's art — tacky religious paintings emblazoned with tackier controversial phrases in bold colors and print. The tamest piece is probably a print of the Last Supper that reads, "Separate checks please!" as Jesus responds, "That's okay I'll be paying the price for all of you."

The rest of the space is filled with religious paraphernalia. A wooden placard about being a good Christian boy hangs in the bathroom. A license plate over the door reads "Church Children Have a Better Chance." Vintage church chandeliers hang from the ceiling. Pee-Wee Herman hangs on a rose-covered cross on the wall. Oil portraits of the Three Kings — MLK, Jesus and Elvis — keep watch over a crowd that takes communion in the form of cheap beer and spiritual sangría. Even the ping-pong table is lined with church pews.

Then there are the people. Whether it's a surprisingly conservative-looking couple engaged in a not-so-conservative tongue tango at the bar, a girl chatting with her parents, hipsters on the back porch bumming smokes, or the insanely good-looking cast of "Drop Dead Diva" playing a round of ping-pong, Church is about fellowship and opens its doors to everyone.

Oh, and glasses. A solid 50 percent of the people in the bar were wearing glasses. Smarty-pants go to Sister Louisa's it seems, which isn't surprising since some of the jokes are fairly obscure religious references. Even the bouncer was reading Russian lit about self-enlightenment in his down time. (Is the joke on everyone or no one?)

Sister Louisa's is, in the words of its leader Henry, "an art project that sells alcohol."

But with paintings of Jesus declaring, "Since I Gave Up Hope I Feel Much Better," this isn't the place for those who lack a sense of religious humor. If Christian guilt remains buried deep in your heart, I'm a living witness that the art in the "XXX" living room upstairs will bring it bubbling to the surface. Not only is the room equipped with "Blood of Christ" red leather couches, but an "I'm Asking Him to Change His Ways" mirror for just this sort of enlightenment. But the coup de grâce is Louisa's obvious infatuation with the P-word. It appears in nearly half of the paintings upstairs — all of which one lipstick lesbian found hilarious — including one full of cute white kittens that reads, "God loves our furry white p__s."

Turns out going to Church on the night before Easter is no substitute for Sunday sunrise service. But, as Sister Louisa is quick to remind you, they're just words.