Barfly - Asian females feed the fetish at Vanquish, whether they like it or not 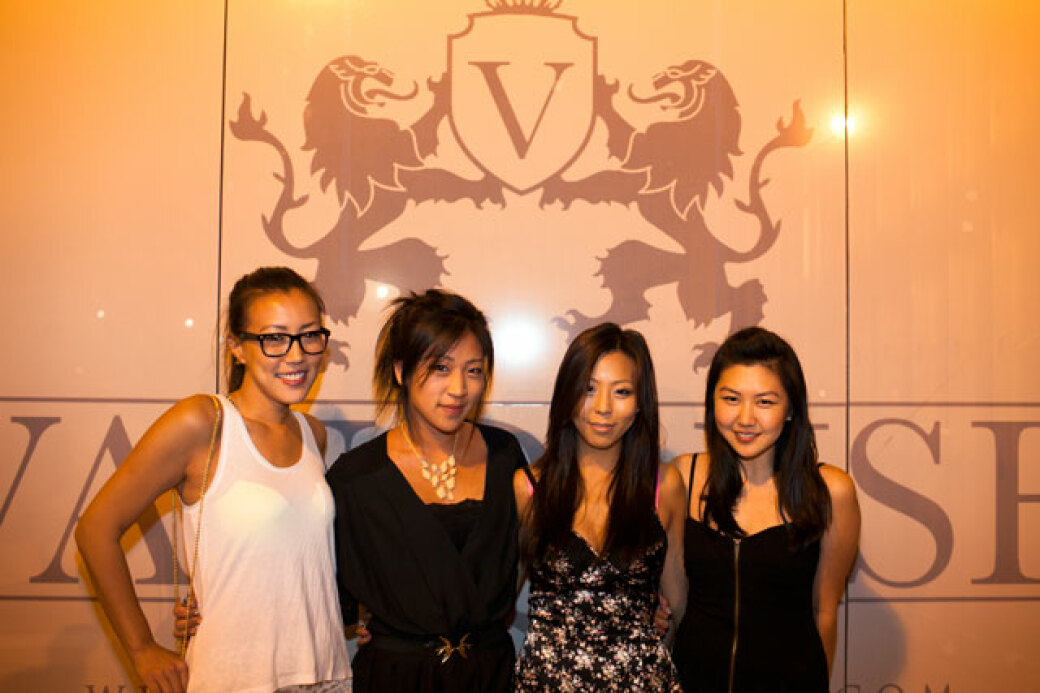 Photo credit: Dustin Chambers
WHERE THE GIRLS ARE: Club promoters boast a 70-percent Asian turnout every Friday at Vanquish.
By Christina Lee Wednesday June 6, 2012 04:00 AM EDT

Two weeks ago, I was signing up for Vanquish Nightclub's Friday night guest list when a scene from Rush Hour 2 popped into my head. It's the one when Jackie Chan and Chris Tucker walk into a tacky Hong Kong massage parlor called Heaven on Earth and bask in its selection: four rows of Asian girls in tight tank tops and sheer Bubble Yum lingerie. As one girl cups her breasts, Tucker's eyes bulge and he nods in her direction: "I'll take that one right there."

With Vision, the Velvet Room, and Compound already cementing their name as Atlanta nightlife's royal family, the Gidewons seized a hotly contested chunk of Midtown Mile territory in 2009 to expand their nightclub empire with the addition of Reign and Vanquish. From the start, plans for the new venue on the block of Peachtree and 11th streets included an Asian night called Fusion Friday — which now boasts a weekly turnout of 70 percent Asians, per its online guest registration, featuring snapshot after snapshot of club-going females Tucker's character would undoubtedly drool over.

As a Korean-Vietnamese-American female, I'm haunted by this bizarre, uniquely Western fetish. Every time I hear "These Boots Were Made for Walking" I'm reminded of 1987's Full Metal Jacket, in which Nancy Sinatra's righteous kiss-off cues a Vietnamese prostitute's iconic come-on: "Me love you long time." The documentary Seeking Asian Female, a hit at this year's SXSW conference, chronicles a white male who tends to his yellow fever by purchasing a Chinese bride — sadly, a decades-old tale. So when I stepped inside Vanquish a couple of Fridays ago, I wondered whether the nightclub would be a real-life Heaven on Earth.

A fortysomething white club patron stood near the entrance bar as if on guard, legs spread and hands clasped, as he took in the 9,000-square-foot view — including three identical VIP areas with snakeskin couches, steel chandeliers, and carafes of mango- and payaya-colored drinks. Then his focus shifted to three sets of stilettos as he slowly raised his head to take in the bare legs, form-fitting dresses, and baffled faces of three baby-faced, barely twentysomething Asian females mere seconds after they stepped inside.

At midnight, groups of Asian girlfriends swarmed and flitted around Vanquish. Asian suitors stood in front of their reserved, parlor-style VIP sections and invited select females inside, gesturing like carnival barkers at their designated circus tents. The girls politely chatted and mingled for the first hour. But when the drinks kicked in, they grabbed each other's hands and ran laps around the club like barflies playing musical chairs, heels a-clacking.

In the middle of the dance floor, a petite, doe-like girl clumsily bent her knees, ponytail swaying, while an equally short Asian guy tried to catch her ass as if he was Roddy White. She stood still for a second, teasing, then grabbed her girlfriend's hands and pulled herself away. He shook his head, laughed, and walked back to his VIP section. It was as if the Asian girls had turned Vanquish into their private playground, where they refused to play nice with anyone else. They even ignored the ogling from the white, black, and Asian men posted at the bars.

I eventually stopped counting how many times I'd dodged that same hungry Chris Tucker gaze directed at me in my wedding-appropriate wrap dress. As if the rapey stares weren't enough, I was fully prepared to tell any stranger who reached for my ass to fuck off. But despite my righteous indignation, I realized while walking back to my car that my mere presence had contributed to Fusion Friday's main selling point.

And I didn't even have to cup my breasts.