Opinion - The year of the stadium

Metro Atlanta lawmakers agreed to two publicly funded stadiums. But at what cost? 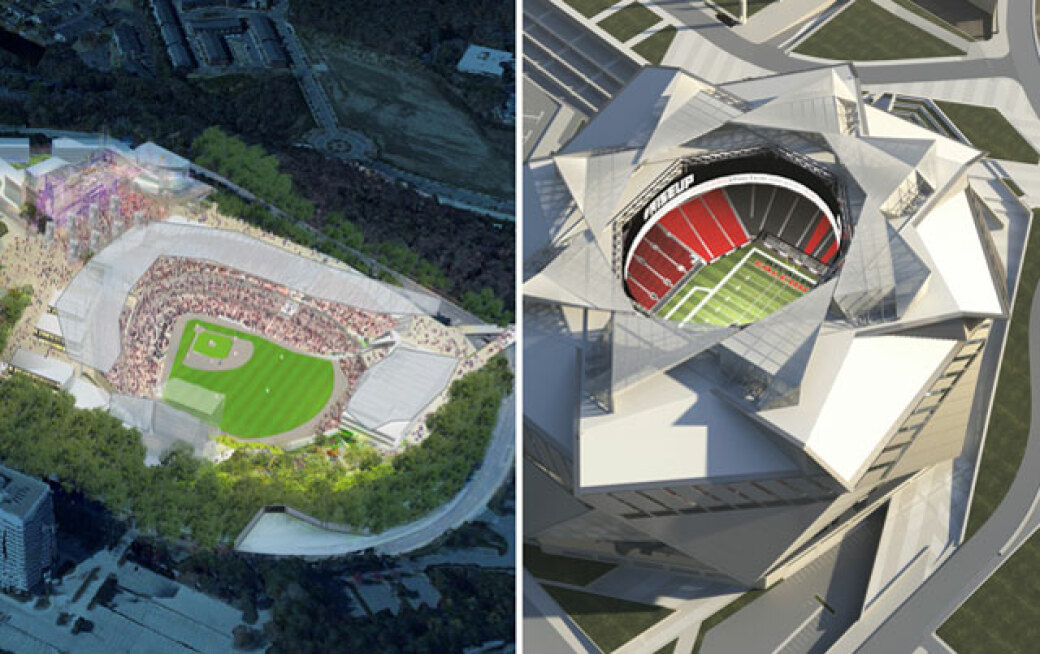 To understand the roots of the public outrage over why metro Atlanta governments are tripping over their feet to fund sports stadiums for billionaires, look back to the July 31, 2012, transportation sales tax, or T-SPLOST. Early results indicated a wide gulf between supporters, who wanted to see more roads and transit, and opponents, who balked at the measure. The tax's failure ultimately had less to do with the selected road and transit projects. The public had grown weary over trusting government officials with more of their cash.

You'd hope that in subsequent years, metro Atlanta politicians would have seen this rejection of a massive investment in solving a regional problem as a clarion call that voters, justified or not, view "the government" as an untrustworthy entity that hoovers money and makes decisions that reward the few, the connected, the usual suspects. And maybe the result would inspire politicians to try and correct this perception. But in 2013 it was only reinforced.

Over the past year, billionaires asked not once, but twice for a handout to build new sports stadiums. Political leaders have complied in both cases. In Atlanta, we saw local leaders rush through a proposal that would contribute at least $200 million — the true cost over time could be hundreds of millions of dollars more — to help Atlanta Falcons owner Arthur Blank construct a $1.2 billion multi-use facility. Twelve miles up I-75 in Cobb County, residents will watch a $672 million ballpark and "entertainment district" be erected on wooded land near Cumberland Mall. County commissioners recently — and in record time — agreed to chip in an estimated $300 million toward that project. Both proposals could be delayed or even blocked by imminent lawsuits, but as of now officials are treating them like done deals.

The proposals weren't the nearly 100 percent publicly funded stadiums for the Tampa Bay Buccaneers, Baltimore Ravens, and Cincinnati Bengals, but there was still ample cause for frustration.

Atlanta's agreement with the Falcons proved to be the lesser of two evils. Although there's a laundry list of better ways to spend $200 million, the city's hands were tied by state legislation — sponsored years before by a Republican from Alpharetta — that specified that the public cash could only be spent on a new stadium. State lawmakers were also cowards to punt the project to the city to avoid heat from vocal Tea Party activists. Yet it was still rushed through the Atlanta City Council.

But it's Cobb County residents who, if the Braves deal goes through, should be up in arms. Cobb Chairman Tim Lee and Braves executives secretly brokered the deal. The move blindsided Atlanta officials, who had been talking with the team about extending its Turner Field lease for 18 months. The deal overwhelmingly favored the Braves. Millions of dollars coincidentally traded hands on real estate around the proposed site in the months prior to the announcement. And it's unclear what kind of jobs and wages the new stadium will create.

People can make a case for why the stadium deals are good for economic development. And we're sure that they'll provide plenty of memorable moments. But stadiums can also come with negative social and financial consequences. To see not one, but two happen here in our metro region when there are myriad problems that deserve just as much attention and financial backing, was astounding. Yes, Atlanta's hands were tied by the law in the case of the Falcons, but we're disappointed that cash seems to be available when certain players step up — money that could help build infrastructure, spark small-business initiatives, fund the arts, house the homeless, and more.

In Cobb, a mammoth county that suffers both from an inferiority complex and an inflated ego, the steadfast insistence not to embrace transit and efforts by the conservative leadership to rationalize how showering millions on a successful business made sense was painful to watch. Cobb, where I grew up, remains as hellbent as ever on remaining cloistered from Atlanta.

Underneath the negotiations and debate voters saw a process that makes them distrustful: elected officials pushing for a shiny new project that requires a substantial public investment without much, if any, public input. The process brought to the surface the very things that have turned hopeful voters into unengaged government skeptics.

It didn't have to be this way. And it surely will be brought up when politicians next ask voters for funding that's sorely, desperately needed: pothole-free roads, new transit to help us move around a growing city, or basics such as sidewalks and bike lanes.

The night T-SPLOST failed, after all hope for the passage of a transportation sales tax was lost, Mayor Kasim Reed, the biggest cheerleader for the multibillion-dollar measure, stood in front of supporters inside the Downtown Marriott Marquis. He appeared deflated and exhausted. Reed saw the votes and knew that distrust of government played a big role. And he wanted to fix it.

"We have to get at the issue of why so many good, decent, honest women and men don't trust their government enough to take on a big problem," he said from the lectern. Rushing massive, expensive projects through approval with limited public input is part of the reason why.

Plus, a massive redevelopment opportunity awaits in Decatur | more...
Search for more by Thomas Wheatley