Opinion - Of monuments and MLK

Is King statue a credit to, or co-opting of, his legacy? 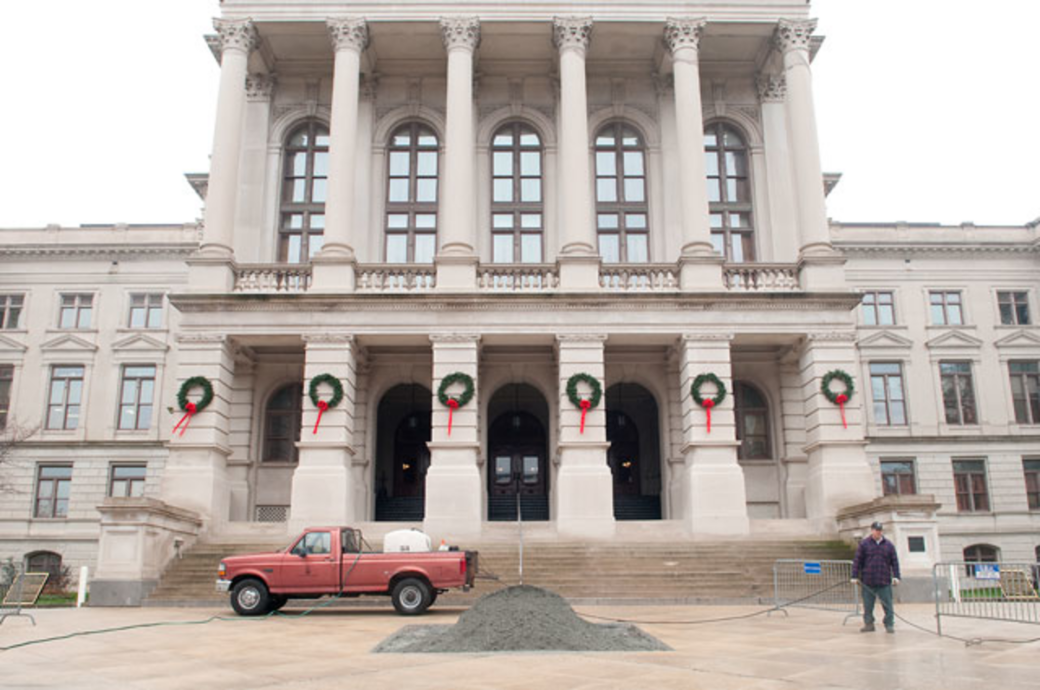 MLK Day happens every year at this time, like a New Year's resolution for our collective conscious.

Yet every year we celebrate it with the same symbolic rhetoric, corporate-sponsored parades, and "day-on" charitable service that does more to absolve America of its middle-class guilt than to solve the ever-persistent problem of poverty in this country.

Whatever Rev. Martin Luther King Jr. may have been in life, he has since become the product of our shared sense of memory. And how we choose to memorialize him reveals more about the content of our character than his.

On the eve of MLK Day in Atlanta, it's time we revisit what King really stood for. And in his home state of Georgia this year, we have a barometer to measure whether our actions are honoring his legacy or further trivializing it.

The timing couldn't be better. Not just because this year marks the 50th anniversary of the monumental 1964 Civil Rights Bill becoming law, but because there's a fresh new spot available in front of the capitol — the one formerly occupied by Georgia legislator Thomas Watson. The 82-year-old statue of the white supremacist and anti-Semite was removed last year by an executive order of Gov. Nathan Deal.

Erecting a King statue at Georgia's seat of government would certainly be an about-face from just over a dozen years ago, when the Confederate battle flag still flew over the Gold Dome as part of the state's flag.

But it's also worth considering whether a statue of MLK on the same grounds would further co-opt King's revolutionary legacy.

In the nearly five decades since his death, King's message has been diluted by the left and appropriated by the right, but few have taken up the kind of work that earned him a bullet on a hotel balcony while fighting for equal rights for Memphis' striking black sanitation workers in 1968.

Fifty-one years after the March on Washington, he's viewed as the nonthreatening leader of nonviolence. But King's pacifism wasn't passive. He was an aggressive activist whose radical theology challenged the status quo and ultimately helped topple Jim Crow.

Sure, King's "I Have a Dream" speech has been widely embraced by mainstream America, but by the time of his death, his Poor People's Campaign and unpopular protests against the Vietnam War lost him substantial support while earning the government's ire.

This year marks the 50th anniversary of President Lyndon Johnson's declared War on Poverty. It comes at a time when the income disparity in this country has reached a peak not seen since before the Great Depression. President Obama recently called economic inequality "the defining challenge of our times."

Georgia Gov. Nathan Deal, however, is dead set against expanding Medicaid, which means approximately 400,000 of Georgia's most vulnerable citizens will go uninsured, according to a study by the Commonwealth Fund, as rural and urban safety net hospitals such as Atlanta's Grady Memorial Hospital lose funding.

Now more than ever, the best way to honor King's legacy is to act on the ideals for which he stood. We don't need MLK statues as much as we need MLK-inspired statutes. The state of Georgia's endless fight against the Affordable Care Act, the war against undocumented immigrants, and the demonization of the poor are complete contradictions to the values King represented. A statue in front of Georgia's capitol could serve to legitimize what goes on inside of it.

As compelling as the argument against a King statue might be, the truth is that America has rarely lived up to the ideals represented by its symbols of freedom. For 128 years, the Statue of Liberty has welcomed "tired, wretched, and poor" immigrants from all over the world to America's shores, but the ongoing immigration battle with one of our closest geographic neighbors highlights America's continued hypocrisy.

In fact, if it weren't for such symbols of democracy and freedom, this country might not have any ideals worth aspiring to. A King statue, if done correctly, could be a huge step forward for Georgia and for our state capitol. Furthermore, its placement in a spot where one of Georgia's most vicious leaders once stood would be a victory for Atlanta and all Georgians. The most "distinguished" statues that currently remain on the capitol grounds are to some of the biggest bigots in state history, including John B. Gordon, considered by historians to be the head of the Ku Klux Klan in Georgia during Reconstruction; Eugene Talmadge, a champion of Jim Crow who proved himself one of the most racist governors in state history; and Richard B. Russell, a U.S. senator who filibustered against Civil Rights legislation for three decades. While this representation accurately reflects Georgia history, a King statue could signal a new chapter, and a New South.

Though it's just a symbol, symbols tell our history and our future. For this reason, a statue to King in front of our capitol is vital. Who better than King to represent what America claims to stand for — equality for all, freedom to assemble and the right to petition our government for change when injustice reigns?

The King statue should stand on the capitol grounds with one caveat: Instead of looking toward the city with his arms outstretched, he should boldly face the Gold Dome as a challenge to maintain vigilant watch over what goes on beneath it.