Opinion - Cash in that chip

What do Atlantans gain from this Golden Age of cooperation? 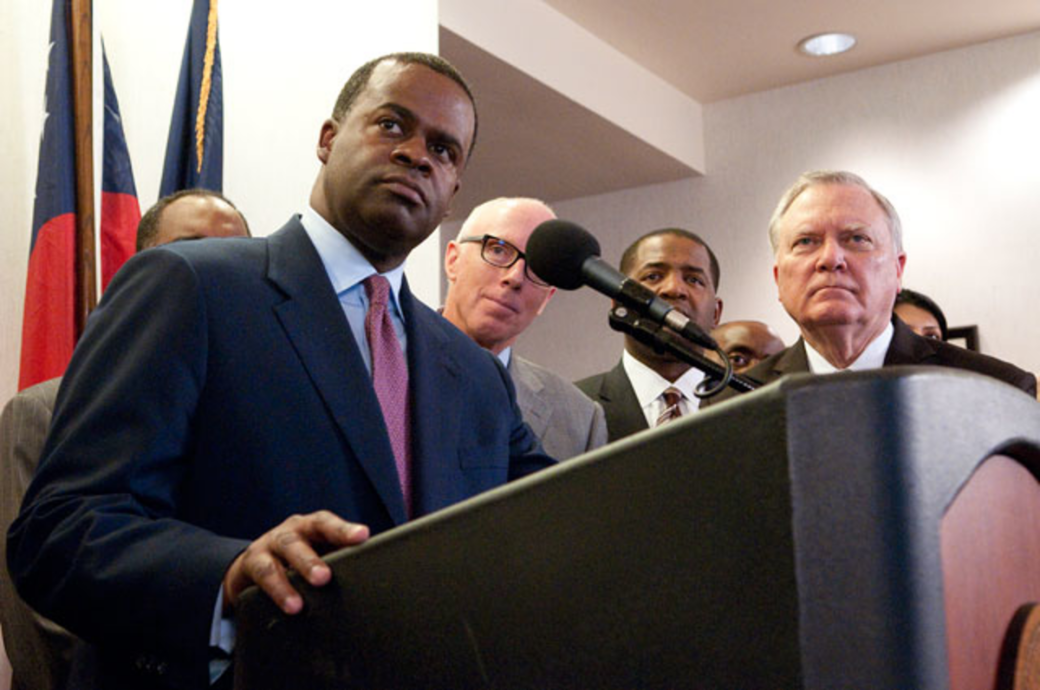 Mayor Kasim Reed has been a team player. On Jan. 28, as stranded motorists prepared to spend the night in their cars and elementary school students curled up on gym mats, the mayor and Gov. Nathan Deal addressed local reporters about Winter Storm Leon. The bipartisan duo appeared together to address metro Atlanta's response to the deep freeze. They became the faces of what would become a national embarrassment.

Over the next few days, Deal appeared red-faced on national TV. The metro region's mayors and county commissioners, the ones who were actually responsible for the emergency response in their respective jurisdictions, were invisible. Reed, the leader of Georgia's largest city, voluntarily became the face of the emergency response and cleanup. With that, he chose to be metro Atlanta's public face. During interviews with local and national media, he didn't point fingers or shift blame. He took one for the team and absorbed the media's blows.

Since Deal took office in 2011, the odd couple has worked closely on major initiatives. That's included wooing big business relocations such as Porsche and clothing company Carter's, and Reed escorting Deal to visit the White House and plead the case for federal cash to help deepen the Port of Savannah. The Economist has branded their cooperative model as "what successful bipartisanship looks like in action" and advised bickering Washington, D.C., to follow their example.

Compare that to the relationship that existed — or more accurately, didn't exist — when former Mayor Shirley Franklin ran City Hall and Sonny Perdue occupied the Governor's Mansion. Back then the two worlds seemed separate. Cash that could have helped fund Atlanta's sewer construction never arrived. The state never kicked in money to help get the Atlanta Beltline off the ground.

That Deal and Reed are willing to collaborate on regional and state initiatives is a positive thing, but it makes us wonder: How is Atlanta benefitting? What have we, the people who elected Reed twice, received?

If we aren't going to be rewarded with transit funding or pro-Atlanta initiatives, we at least deserve a full-throated endorsement of the city and an end to the demonization that has existed so long. This isn't a savvy political move and there's little incentive for the governor — or suburban elected officials — to do so. But it would be a start.

One could argue that there have been small things here and there that have benefitted Atlanta. The state OK'd legislation allowing city officials to ask voters to extend the 1 percent special sales tax to fund the sewer program. Could less obvious initiatives such as the state Senate's spiking of a bill that could have hamstrung labor unions working on the new football stadium have been a show of solidarity from the state? Perhaps the reason Fulton County's more affluent northern cities haven't split off to re-create Milton County is because Deal is being a good ally. You could say the same thing about staving off the takeover — or the continued bullying — of MARTA.

Yes, it's possible that these efforts are thanks to Reed's support of Deal. His alliance might be keeping the barbarians at the gate. Either way, they are examples of the GOP doing no harm rather than explicitly endorsing any part of Reed's agenda and what's best for the city.

We're left to wonder what the end game of this bold partnership is for the mayor. Does Reed think that if he runs for future office, some members of the GOP will throw their support, even indirectly, behind a Democrat? Or maybe Reed has been working with Deal on a grand plan to give MARTA state funding or bankroll a homelessness initiative.

Remember, when Deal sniffed a Tea Party backlash to legislation vital to providing public funding for a new Atlanta Falcons football stadium, the mayor took on the touchy issue. Reed was the biggest cheerleader of the T-SPLOST leading up to the 2012 referendum. In addition to building roads and transit in metro Atlanta, the 1 percent transportation sales tax would have made major fixes to interstates overseen by the state.

To excel, metro Atlanta must get past the fiefdoms that have splintered the region into a dizzying number of governments. If we're to learn anything from the chaos of Winter Storm Leon, it's that regionalism requires more than just lip service to be effective. True regionalism requires partnership like the one that ostensibly exists between Deal and Reed. But collaboration only works when both sides put in.

We've watched our mayor put in much more than Deal for about four years now. Georgia is a magnet for new businesses and residents because Atlanta is its anchor. We think it's time for a little payback from the governor and suburban leaders.