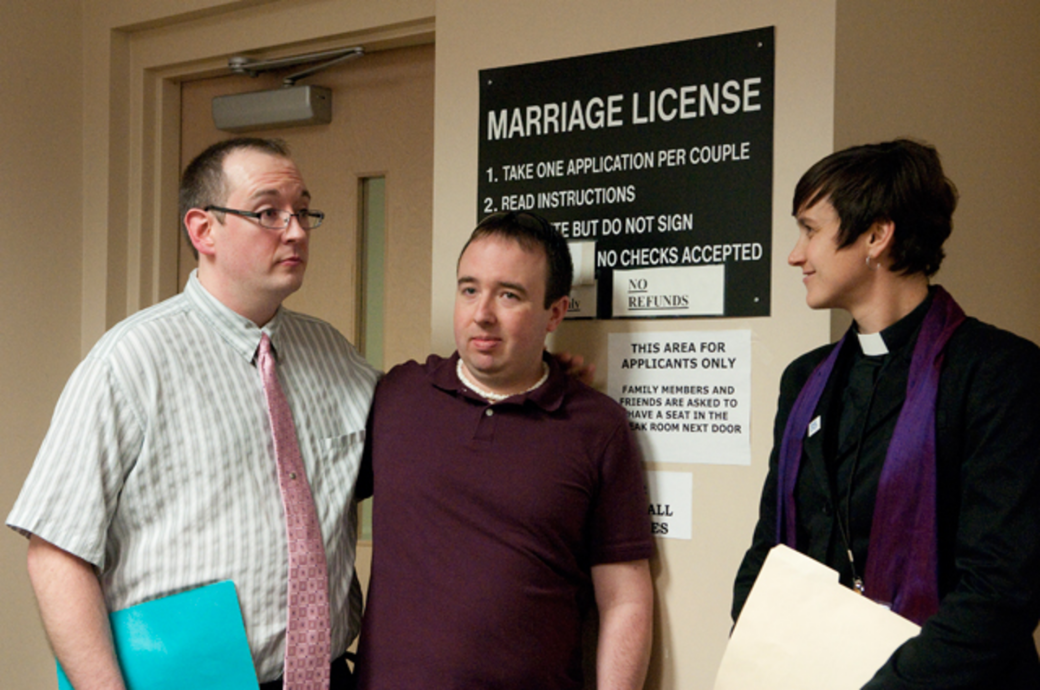 This month it is widely expected that the U.S. Supreme Court will strike down same-sex marriage bans throughout the country. In doing so, the justices would open the door for committed same-sex couples in Georgia to share the same rights, privileges, and responsibilities of marriage that many Georgians already enjoy. Despite the assurances from Gov. Nathan Deal and Georgia Attorney General Sam Olens that the state will faithfully comply with the Court, some legislators seem all too eager to seize the Court's potential ruling as an opportunity to dig in and strike a blow to LGBT equality. Their zeal to ensure LGBT Georgians remain second-class citizens is both embarrassing and frightening, but it isn't without precedent in the Peach State.

Though the U.S. Supreme Court ruled that segregated schools were unconstitutional in 1954, Georgians stubbornly refused to comply. That year, Georgia voters approved an amendment to the state constitution that allowed the governor to shut down public schools rather than obey integration orders. The University of Georgia was segregated until 1961. Georgia's leaders continued to play games with primary schools to avoid implementing Brown v. Board of Education until 1969.

While the U.S. Supreme Court struck down laws banning interracial marriage in 1967, one Columbus, Ga., probate judge refused to issue a mixed-race couple a marriage license as late as 1972, prompting a swift crackdown on the state by a federal judge. Antiquated laws intended to undermine Georgia families lingered on the books for years. The General Assembly did not repeal its statute compelling the Attorney General to prosecute interracial couples who had children together until 1975. The provision of the Georgia Constitution interpreted by the Georgia Supreme Court in 1869 to prohibit the General Assembly from legalizing interracial relationships is still in the Georgia Constitution.

Recently proposed religious freedom legislation will certainly return in the 2016 legislative session and will act as a proxy for those wanting to push back against any Supreme Court decision supporting the expansion of LGBT rights.

Crucial municipal protections have been secured in Georgia localities, including Atlanta, against LGBT discrimination in housing, employment, and public accommodations. And while the public was assured by legislators that religious liberty legislation would not undercut nondiscrimination norms, some supporters openly declared otherwise. Take conservative pundit Erick Erickson. He argued that the legislation could and should be used as a vehicle to gut LGBT civil rights protections by allowing businesses to turn away same-sex couples citing religious justifications and stave off the expansion of local civil rights ordinances.

Here, history again provides an important lesson. This nation settled the question of whether private businesses should be subjected to nondiscrimination laws. We must not revisit that basic tenet of the American social contract. Moreton Rolleston's "free association" interest to deny African-Americans lodging at the Heart of Atlanta Motel was resoundingly rejected in 1964. Maurice Bessinger's claim that "religious freedom" permitted him to deny serving African-American patrons barbecue in South Carolina found no sympathy in 1966. When the federal courts in 1964-65 compelled former Gov. Lester Maddox to integrate his cafe by Georgia Tech or shut down, property rights and American free enterprise were not forever destroyed as he'd claimed.

Georgia's long-lasting resistance to civil rights continues to damage the state. Georgia remains one of only five states without a public accommodations law, which would prohibit businesses from invidiously discriminating against customers. It is perfectly lawful under state law for a bar to refuse service to black patrons or a florist to deny service to same-sex couples, for example. For more than 50 years now, this country has firmly held that for-profit entities cannot discriminate against protected classes in ordinary commercial transactions, yet Georgia continues to lag behind. A Georgia public accommodations law to prohibit this kind of discrimination has been far too long in the coming.

Similarly, our lack of employment civil rights laws is shameful. Even today, it is legal in some circumstances under Georgia law to hire or fire employees on the basis of race, color, religion, sex, or national origin. Georgia joins only Alabama and Mississippi in failing to meet this basic obligation. That is a lonely distinction we can't afford to keep in 2015. It is time to abandon our 1960s approach to employment civil rights and enact comprehensive legislation.

Georgia must not repeat the revolting history of civil rights resistance that many state leaders have long embraced. Rather than use the Supreme Court's probable ruling in favor of same-sex marriage as an opportunity to bludgeon LGBT Georgians' gains, elected leaders must seize on the moment to repudiate our anti-civil rights legacy and make Georgia a beacon of equality.

Anthony Michael Kreis teaches at the University of Georgia School of Public and International Affairs where he focuses on LGBT rights and civil rights law reform.