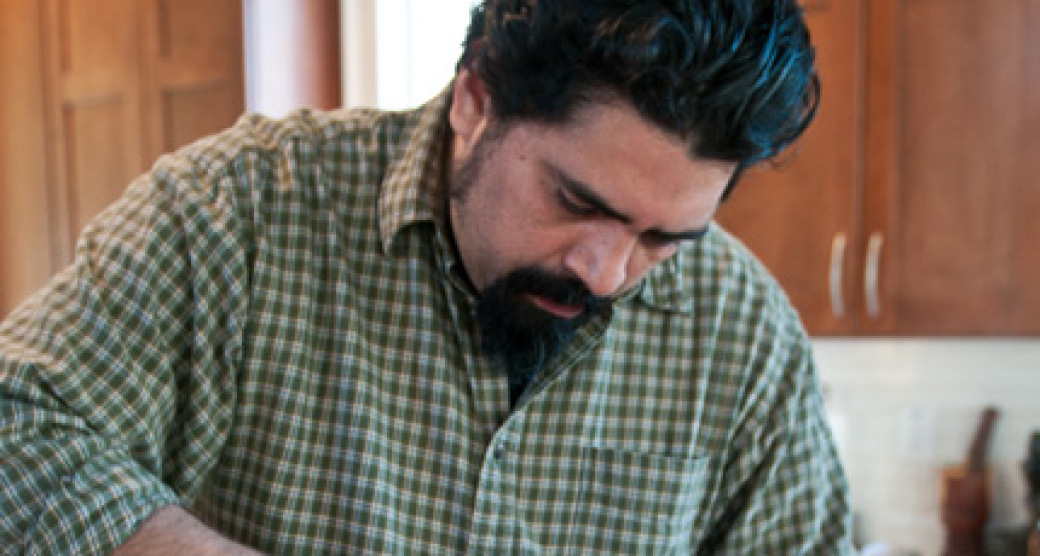 This is the first in a series of occasional features titled $20 dinner, where we ask a chef to make a full dinner for two or more people for less than $20.

Chef Hector Santiago has two words of advice on making dinner for $20: "Wing it." Had he been at the helm of Pura Vida, Super Pan, or El Burro Pollo, the three complementary ventures he's created on a single block of Highland Avenue, Santiago might have had a different attitude. Instead, his demeanor at the DeKalb Farmers Market on Monday morning has the unmistakable air of a man on a rare day off, dressed in an old flannel shirt and sunglasses, showing stubble around his recognizable goatee, and without a plan aside from the vague idea that he "might want to grill something."

Santiago strolls along the butcher's cases, glancing at the turkey thighs and skirt steaks until he settles on a cut tucked in a dimly lit corner of the case. "A lamb breast," he says to butcher and then turns to explain, "When I get a whole lamb in at the restaurant, that's what I bring home." The cut, which includes the opposite end of the ribs from the tenderloin, is unusually fatty, making it cheap and, like pork belly, well-suited for slow cooking.

With the meat settled, he takes a couple laps through DeKalb's considerable produce selection, snapping the ends of white yautia (a root common in Puerto Rican cooking) to make sure they are moist enough, sorting through for the freshest bunch of cilantro, and occasionally picking something up only to put it back moments later. "This is why my wife hates going grocery shopping with me. I could be here all day," he says.

Back at his home in East Atlanta, Santiago gets a fire started in his charcoal grill, a homemade rig consisting mostly of old bricks and a metal table set up on a backyard deck. He and his wife Leslie live in the house they built just a few years ago and, while the coals start burning in the grill, they point to the spots where they're still planning on making improvements: a vegetable garden here, a chicken coop there, and so on.

Inside, Hector and Leslie work comfortably together, seasoning the lamb, peeling shrimp, cutting oranges, setting pots of water to boil, and before long it is quite clear that dinner won't be ready anytime soon. "I can make a dinner for under $20, but I'm glad that no one brought a clock," he jokes.

On the counter, he's scribbled out an ambitious list of dishes — shrimp confit, grilled lamb with yautia noquis, yautia fritters with shrimp aïoli, Minneola orange salad, candied orange with goat yogurt. "Tapas," he says, "I can never get away from them."

The subtle key to making all of these dishes on a small budget comes from the overlap in ingredients. The oil used in the shrimp confit is reserved for making the aïoli that accompanies the fritters. The orange peels from the salad are candied for the dessert. Even the cilantro stems, almost always discarded, are used to add a kick of freshness to the fritters. "I stole that one from Richard Blais," he says, laughing. While Santiago claimed to be winging it in DeKalb, he'd been cleverly constructing a group of complimentary dishes.

As the lamb slowly finishes grilling outside, Santiago recalls from childhood the even longer process of cooking lechón, a whole pig on a spit, in Puerto Rico. "My uncles would get the coals started at 5 in the morning. We had all kinds of trees back home — oranges, grapefruit — and they'd be drinking grapefruit and vodka all day long. By the time the pig was finally done at night, they were, too."

While prepping the ingredients, Santiago has been saving scraps in a glass — a few chunks of orange, a couple slices of hot pepper — and to this haphazard collection he adds some agave nectar, a jigger of Puerto Rican rum and a squeeze of lime. Some ice and a few shakes later, he's squeezed a clever cocktail — sweet with a slow, lingering burn — out of mostly the same ingredients as the dishes now covering his dining table. He finishes off the drink with a smile. It is his day off, after all.

Salt and season the dry, cleaned lamb breast, set aside. Build a medium-hot charcoal fire. Once charcoal is fully white, spread the coals evenly and place lamb breast a few inches above open, indirect heat. Turn every 25 minutes or so, letting the breast continue to cook over diminishing heat, for about 90 minutes.

Steam the yautia until it is soft and breaks apart easily, about 60 minutes. Drain thoroughly and combine with dry ingredients and egg into a dough on a floured surface. Roll out the dough into a 1/2-inch thick roll and slice into 1/2-inch wide gnocchi. Boil in salted water until they float, about 4 to 5 minutes. Drain the gnocchi in a colander and then fry in a nonstick pan with olive oil, turning until crispy. Salt and pepper to taste. Garnish with Parmesan, if desired.

In a small frying pan, layer the garlic, peppers, shallot, salt, rosemary sprig and shrimp. Splash pan with fish sauce and sprinkle with pimentón. Add olive oil until the shrimp are completely submerged (using a smaller pan will require less oil). Place pan over very low heat and cover. Cook for 20 to 25 minutes, turning shrimp once. Strain and reserve the cooking oil in a measuring cup for aïoli. Serve the shrimp topped with garlic, pepper, and shallot combination and a drizzle of oil. Garnish with cilantro.

Run the yautia through a micrograter or zester to create a wet, sticky paste. In a mixing bowl, combine the yautia paste with a splash of fish sauce, salt, baking powder and chopped cilantro stems. Heat deep fryer or pan with 1 inch of oil to 350 degrees and fry tablespoon size bites until golden brown, about 3 minutes.

Bring a large pot of water, salted until "almost like seawater," to a low boil. Blanch broccoli rabe for 5 minutes, drain, and then rinse with cold water in a strainer. Heat a large frying pan with olive oil and garlic to medium high, add drained broccoli rabe and cook, turning frequently, until tender.

Lay orange, pepper and shallot slices in an attractive arrangement on plate. Sprinkle with salt and minced rosemary. Garnish with chopped cilantro.

Blanch the orange peels in a small pot, changing out the water four or five times to cook off the bitterness of the skins. Drain and then return skins to the pot in a mixture of equal parts sugar and water. Simmer until the mixture has a syrupy consistency. Serve the candied orange peels atop yogurt. Garnish with dried fruit and nuts, if desired.

Americans for the Arts, the national arts nonprofit, has recognized WonderRoot executive director Chris Appleton with the 2014 Emerging Leaders Award. Since 2006, the award has been awarded for "visionary leadership by an individual who is a new and/or young arts leader who demonstrates an ability to engage and impact his or her community." Appleton...

I can't stop looking at Thank You For Stopping By Article

The latest episode of Atlanta's newest talk show features local poet and newspaper man Daniel Beauregard discussing Africa and news with host Gavin Bernard. If you can't stop watching this thing, either, there is also a short episode about pizza bites.

Last night, the 2014 Townsend Prize for Fiction was awarded to Anthony Winkler for his 2012 novel God Carlos. The novel, which tells of Spanish brutalities against native peoples in 16th-century Jamaica, is Winkler's ninth book of fiction. He...

I don't have business cards: A conversation with Michael Tavani Article

While working on last month's cover story about email marketing company MailChimp, I noticed that Scoutmob founder Michael Tavani announced that he would stepping back from his day to day role at the company he helped found. To accompany that...