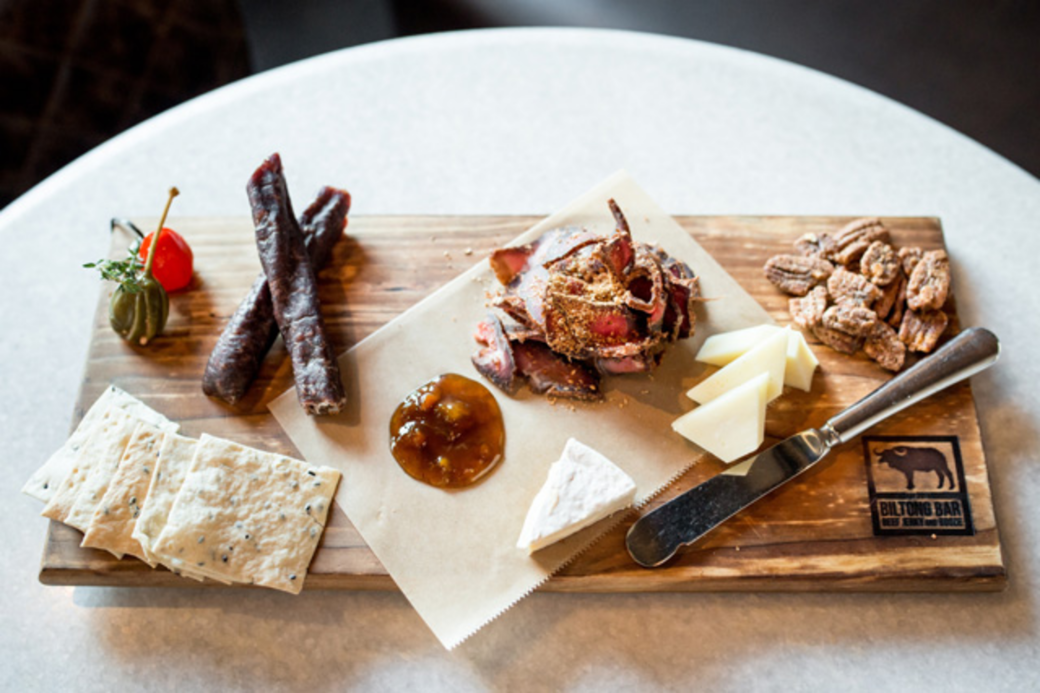 The menu's protagonist is biltong, and it shows up in almost all the dishes. Biltong ("bil" means rump and "tong" means strip in Dutch) is cured, dried meat (beef, game, ostrich) similar to beef jerky. The main difference is that jerky is sliced before drying, whereas biltong is dried and sliced to order. Biltong meat is typically much thicker and more flavorful compared to jerky.

Common in Johannesburg grocery stores and butcher shops, biltong is a staple snack over which people get together or just nibble on while walking around. Anthony's new eatery aims to replicate that concept. There is a little shop at the entrance where one can purchase traditional sodas, teas, and sauces. The main counter offers a row of different kinds of biltong, pies, and other snacks. At first glance, it is hard to say if this is a take-out café or a sit-down bar.

Only when you walk past the wood-paneled counter can you see the rustic interior decorated with chocolate leather seats and contemporary globe chandeliers. There are about 25 bar seats, which are covered in more dark leather. The towering bar exhibits spirits of all kinds, and a prominent bartender's ladder. The drinks are as bold as the ambiance. Old Fashioned ($10) with Old Grand Dad Bonded Bourbon, and Wicker Man ($9) with Dickel rye and buckwheat honey are some of the more popular choices. There are also a variety of domestic and imported beers that come in bottles, cans, and drafts. The old-world-meets-new-blends theme carries out in the wine selections as well. Pinopasso Pinotage ($9), Excelsior Cabernet ($9), and Chocolate Block Syrah Cabernet ($18) represent some of the wines beverage director Sean Gleason has carefully selected.


At Biltong Bar, there are six options of biltong offered, including original fat on or fat off, droewors (dry thin sausage), dried lean beef, spiced sausage, and chili-spiced bites. It is sold by the ounce or slab (starting at $2.25 per ounce), and patrons can watch the slicing process and purchase biltong in strips (known as stokkies). It is fun to grab a bag and snack on biltong while strolling through the market. Biltong is also a good add-on to sandwiches and homemade stews.

The meat used is certified organic Angus beef sourced from Georgia farms. Dry spice seasonings such as garlic, peri-peri (crushed red chilies, salt, oregano), or traditional (black pepper, coriander, brown sugar) are sprinkled on top of the dried meats. The biltong can be eaten as is or paired with salt and vinegar chips ($7) or peri-peri popcorn ($7). Biltong also shows up in a spinach and goat cheese salad ($12) dressed in red wine vinegar, and it is also paired with Manchego and Brie on the cheese and biltong board ($16).

Savory hand pies stuffed with chicken, beef, or vegetable curry ($7) are another one of the bar's specialties. The thick curries add a sweet and savory contrast to the flaky pastry crust. (The dough mixture comes from H&F Bread Co.) Accompanying dipping sauces such as peach chutney gravitate toward the sweeter side, while peri-peri has spicier notes of chili.

Biltong Bar is the first eatery in town to combine the casual South African jerky experience with a chic bar environment. Though the bar holds much promise for visiting weekenders and intown happy hour crowds, it remains to be seen how well Atlanta will embrace its unique concept.

Buckhead version of the popular Ponce City Market location. This one didn't make it through the pandemic.
—Read Article 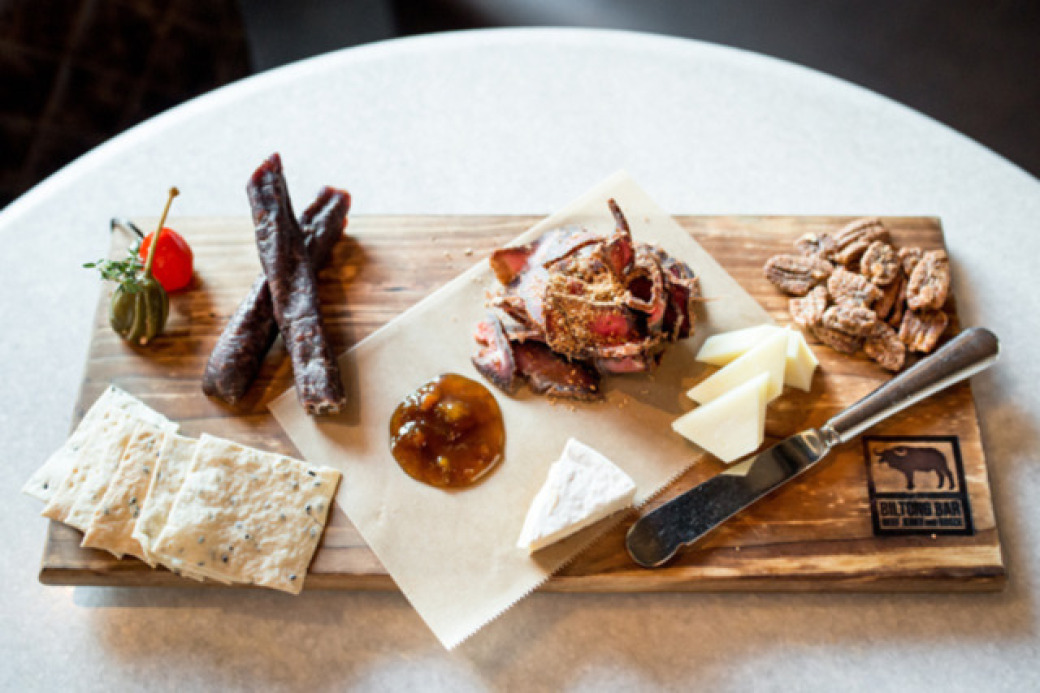